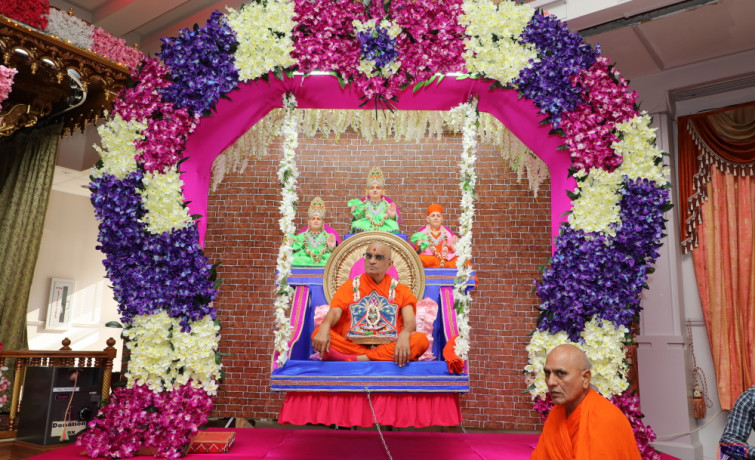 Friday, August 2nd, 2019, marked the beginning of the 18th Patotsav celebrations at Shree Swaminarayan Temple - Secaucus, New Jersey. The day's celebrations, titled "Youth Day," were a series of events for the youth of the temple and by the youth of the temple. The celebrations began around 4 PM, with a one-hour dhoon in the presence of His Divine Holiness Acharya Swamishree and sants. As the dhoon reached its finale, disciples overcome with joy and excitement began to dance along to the harmonious singing and musical instruments. Acharya Swamishree and sants, too, exhibited joy and excitement during the apex of the dhoon. After the dhoon concluded, Acharya Swamishree was seated upon a floral-themed hindolo, and He graced us with His divine darshan while lightly swaying back and forth.

Young disciples continued the festivities by performing a short skit during the sabha. The skit was to help inform and teach disciples how to behave and act properly inside the temple. The youth learned all the proper conduct, which immensely pleases the Lord, such as speaking Gujarati inside the temple; performing dandvat and darshan properly to the Lord's murtis, Acharya Swamishree, and sants; and avoiding distractions during sabha, amongst other valuable lessons.

The program then continued as the Baal Mandir disciples, the very youngest of the congregation, offered roses to Acharya Swamishree and began to sway Acharya Swamishree's hindolo. Sants and youth disciples then began utsav, which everyone in the hall enjoyed listening to, and singing and clapping along with. The program concluded with Raksha-Bandhan celebrations, as disciples were blessed with the opportunity to have Acharya Swamishree tie raakhdis on their wrists.

Disciples then enjoyed dinner maha-prasad and various types of ice creams and candies for a dessert to the liking of young children (and adults!). The program finale was a fireworks presentation outside the temple in the presence of Acharya Swamishree and sants. Youth disciples lit over 1,000 different fireworks, as well as provided all other disciples the opportunity to light sparklers and spinners. The fireworks display lasted for over thirteen minutes and included fireworks of all colors, as well as some that shot up to over 200 feet into the air. The first day's celebrations concluded thereafter. 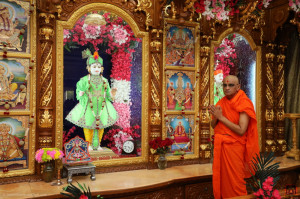 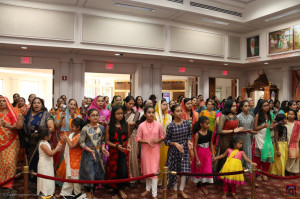 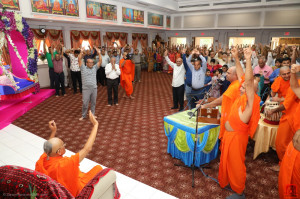 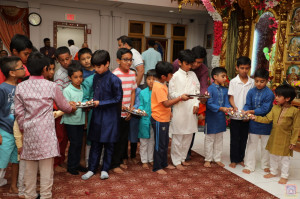 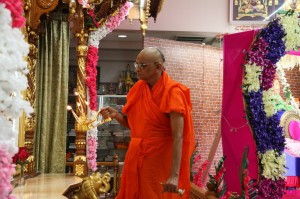 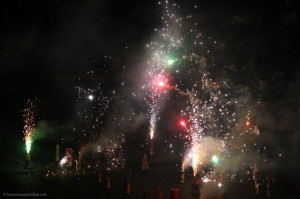