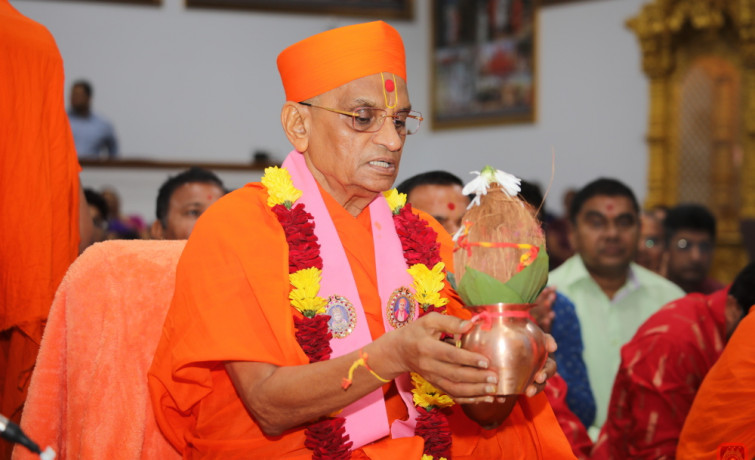 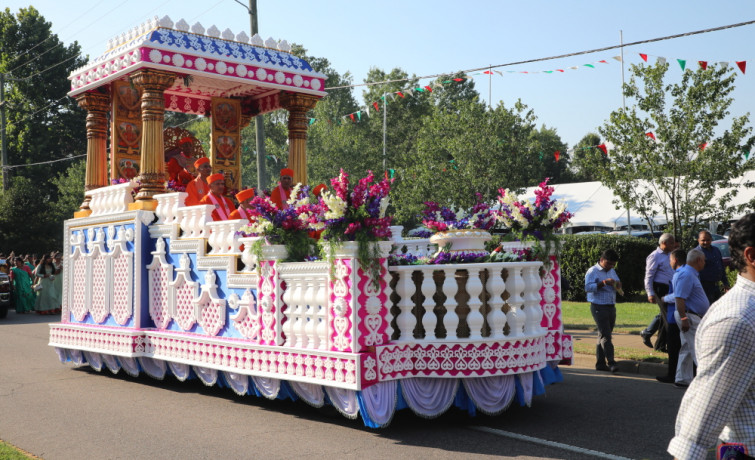 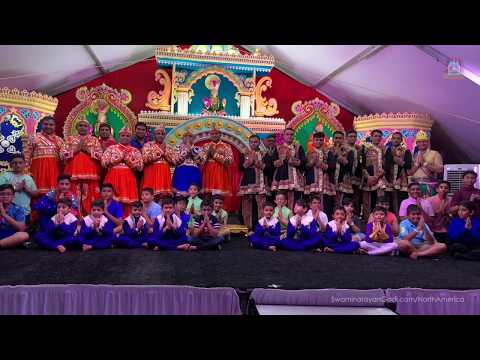 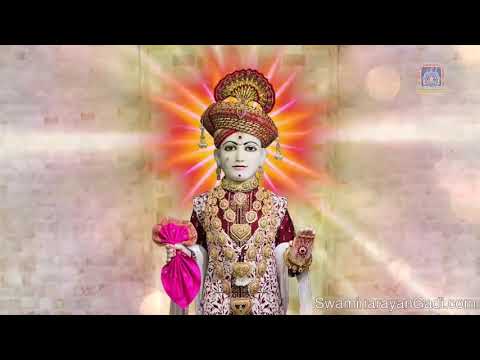 Day two of the Murti Pratishtha Mahtosav at Shree Swaminarayan Mandir Chesapeake started with mangala aarti in the early hours of the morning. Many disciples had arrived early in the morning, both for aarti darshan, as well as to help with the day’s food preparations in the kitchen.

At approximately 8 AM, Acharya Swamishree arrived to the Mandir and then commenced the ancient Vedic yagna ceremony. The first part of the ceremony was the “havan” or the “offering,” during which several offerings, all non-violent per the supreme philosophy of Lord Shree Swaminarayan, are made to the yagna flame to call the Lord to eternally reside at the temple. The havan concluded with Acharya Swamishree, sants, and disciples performing aarti to the Lord.

Also during the morning, several special guests, including Dr. Richard W. West, Mayor of Chesapeake City, and members of the Chesapeake Police Department, who very graciously provided security all throughout the Mahotsav, were presented with prasad paags and shawls. Expressing his delight on meeting Acharya Swamishree Maharaj, Mayor West said in his speech, “I can sense the aura of peace when coming to this place and meeting Acharya Swamishree Maharaj. I realize that he is a very special individual and I welcome him and you all to Chesapeake. I have attended many ribbon cutting ceremonies, but nothing is as humbling as the event that I have the honor of seeing today.” On behalf of the Mandir and Maninagar Shree Swaminarayan Gadi Sansthan, Acharya Swamishree then offered several checks of $1000 each in donations towards the Mayor’s special charity appeal and the Chesapeake Fire and Police Departments. 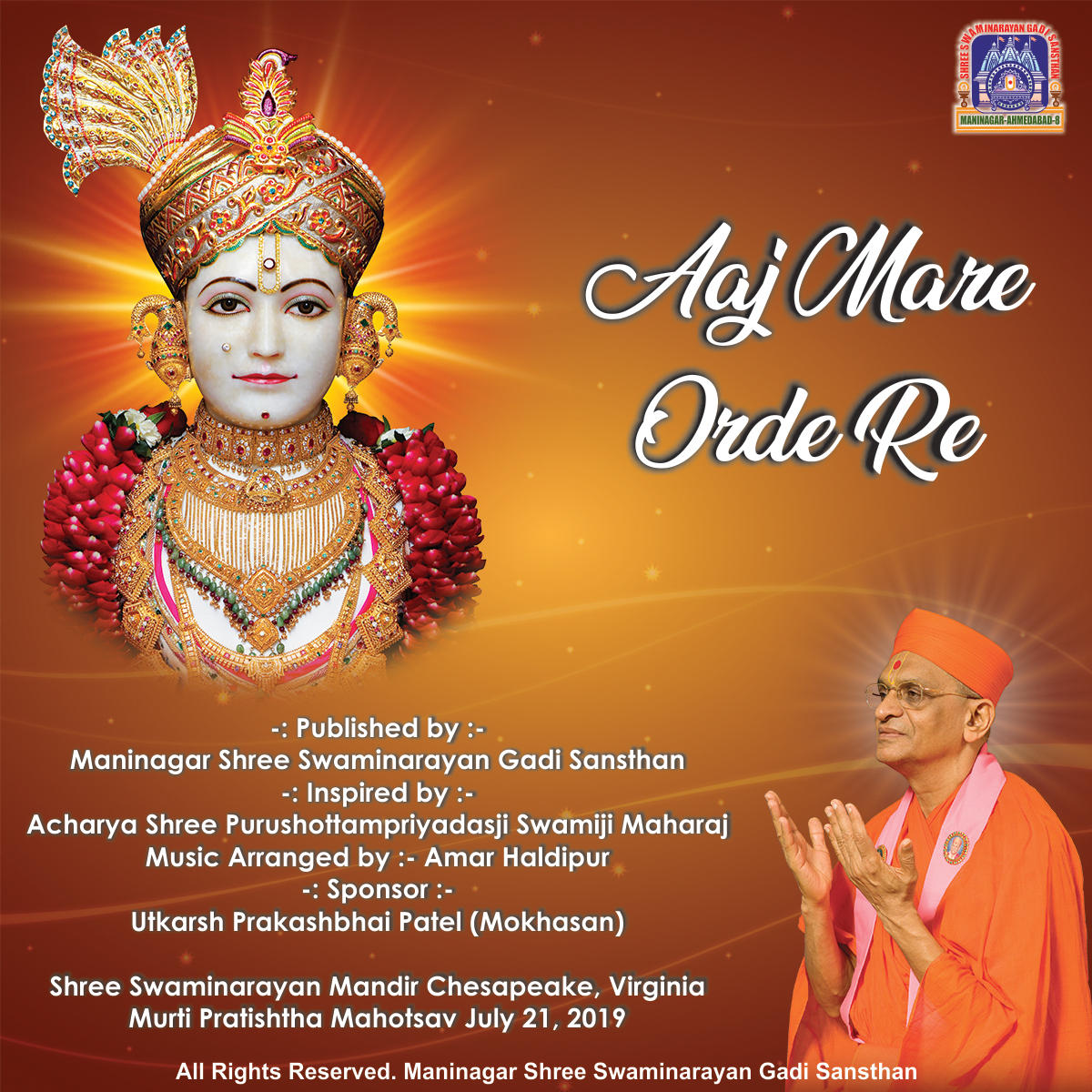 Thereafter, Acharya Swamishree was escorted to the food tent to consecrate the morning’s lunch and to bless all of the volunteer disciples, and He was then escorted back to the temple. Everyone then enjoyed lunch mahaprasad to conclude the morning’s events. 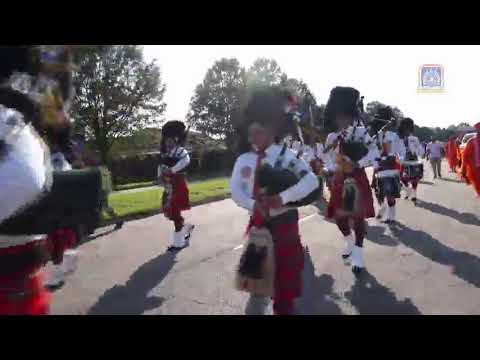 At 5:00 PM, sants and disciples congregated at Amber Woods Drive for the start of the afternoon’s nagaryatra, which would triumphantly proceed through the streets of Chesapeake, Virginia, to announce the imminent arrival of Lord Shree Swaminarayan, Jeevanpran Shree Abji Bapashree, and Jeevanpran Shree Muktajeevan Swamibapa to Shree Swaminarayan Mandir in Chesapeake, Virginia on Sunday, July 21. This procession was equally a peace procession, to spread the message of unity and brotherhood amongst people from all faiths, social backgrounds, and cultures.

Shortly after, His Divine Holiness Acharya Swamishree’s van arrived at the starting location. Disciples eagerly approached Acharya Swamishree to garland Him and to escort Him to the beautiful, intricately-decorated chariot that had been hand-constructed for the nagaryatra.

The procession then commenced. The parade route weaved itself through the streets of Chesapeake and its neighborhoods, passing several Christian churches of various denominations, making its way to the Mandir. The route of the parade itself exemplifies the significance this Mandir will have in strengthening community ties between all walks of life and all faiths. It also tied together the various faiths present in the city of Chesapeake today, truly pervading the message of peace all throughout. The Chesapeake Police Department graciously provided security and managed the road closings all throughout the procession.

Shree Muktajeevan Swamibapa Pipe Band, U.S.A., with members from New Jersey, Delaware, and Virginia Mandals led the procession. With several mandals being represented, it was a truly united group! Dozens of discipels carried kalash behind Acharya Swamishree’s chariot, and hundreds of disciples from all over the world walked in the procession, many in matching uniforms, singing praises of the Lord. Disciples in the back also danced to ‘timli’ kirtans. Hundreds of local residents came out from their homes to gaze at the procession, the divine murtis of Lord Swaminarayanbapa Swamibapa, and Acharya Swamishree. Some had even set up their lawn chairs near the Mandir entrance to really enjoy the beautiful sight. They snapped photos and recorded videos with their cameras. Lord Swaminarayanbapa Swamibapa and Acharya Swamishree bestowed their divine darshan upon them all. 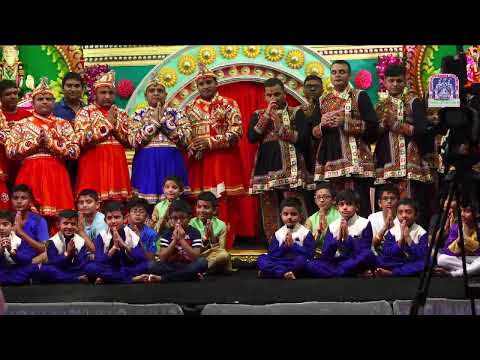 Saturday evening, disciples from across North America were given the opportunity to showcase their devotional talents to please Lord Shree Swaminarayan, Jeevanpran Shree Abji Bapashree, Jeevanpran Shree Muktajeevan Swamibapa, and His Divine Holiness Acharya Swamishree. After mahaprasad, Acharya Swamishree, sants, and disciples all gathered back in the sabha mandap for the evening devotional and cultural program.

The evening commenced with devotional singing (kirtan) performances by the young girls of Shree Swaminarayan Mandir Chesapeake. They recited a small prathna slok and then sang the kirtan “Aaj Sakhi Anand-ni Heli” to please the Lord and Acharya Swamishree. It was truly a delightful performance.

The Lord and Acharya Swamishree’s blessings were with all of the disciples throughout the night, and everything went smoothly for a pleasant evening. Uproar of cheering from the crowd followed each and every performance.

At the end of all of the performances, Acharya Swamishree blessed all of the disciples who partook in pleasing the Lord that evening. He thoroughly enjoyed all of the performances throughout the night. It was evident in His eyes and smile that He was truly pleased to see how much love for the Lord, devotion, and talents in the disciples of North America have grown since Gurudev Jeevanpran Shree Muktajeevan Swamibapa’s visit to North America in 1970 and since the opening of the first temple in the United States, Shree Swaminarayan Temple New Jersey, in 2001. 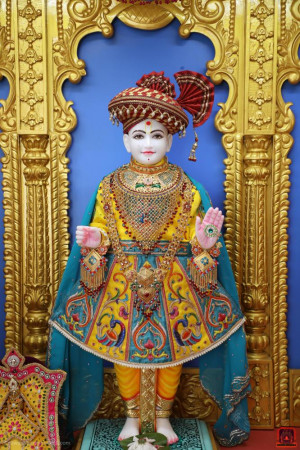 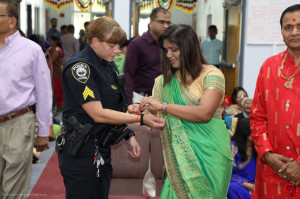 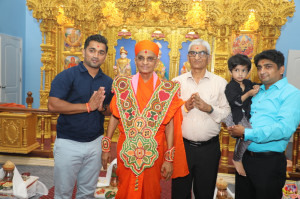 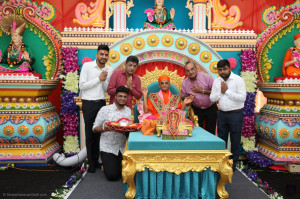 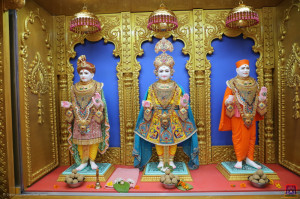 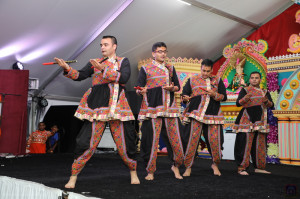