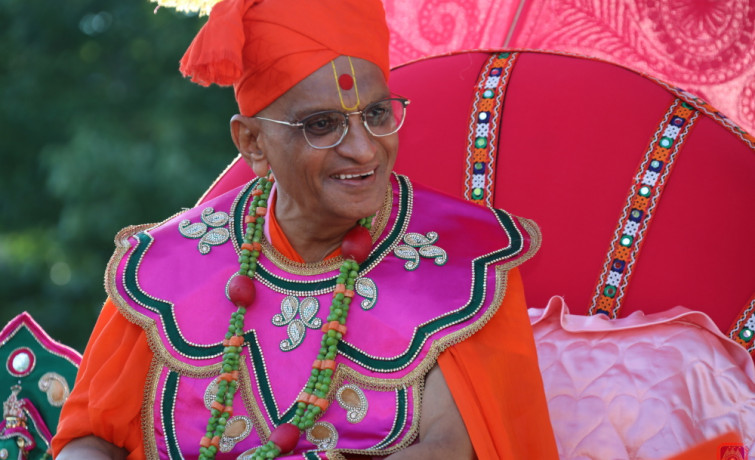 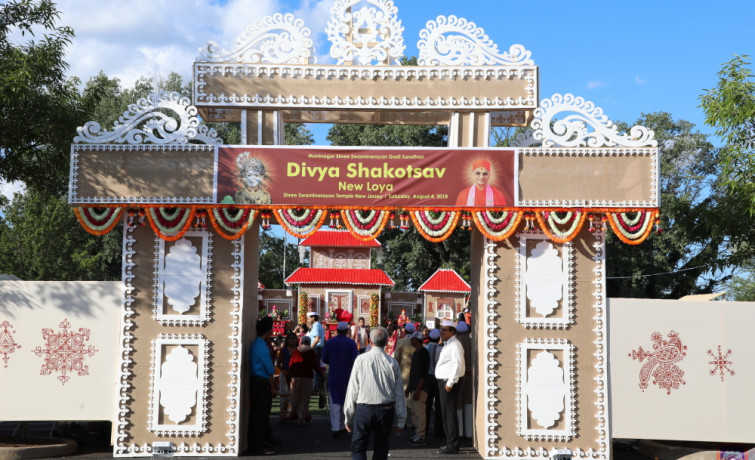 In Samvat 1877 (1820 CE), Kartik Vad 10, Lord Shree Swaminarayan was presiding in the gaam of Loya. During an assembly, He said “My dear Sants! You prepare lavish meals for me, but now I want to prepare shak (curry) and serve you all. I will prepare such a delicious shak that you will remember it forever.”

The Lord then summoned for ringan (eggplant), ghee (clarified butter), salt, spices, sugar, and chilis, and He prepared a delicious eggplant shaak. This marked the beginning of the Shakotsav festival.

Since the Lord Himself prepared and served the shaak to all who came to celebrate this festival, His clothes became stained from tumeric powder and other spices, but He did not care about this - His sole purpose was to serve His beloved sants and disciples. Jeevanpran Shree Muktajeevan Swamibapa showed this same spirit of servitude by referring to Himself as “dasanudas” or “the servant of servants.”

The news of this Shakotsav spread to neighboring villages and regions, and disciples from different regions gathered in Loya for this festival. Disciples humbly and generously donated to this event, and the Lord accepted their offerings. This festival continued for two and a half months. On the final day of the festival, Lord Shree Swaminarayan prepared eggplant shaak with 360 kilograms of fresh ghee and 1200 kilograms of eggplant!

The Lord asked Nityanand Swami and the other sants to make sweet ladoos, so Nityanand Swami served those. However, the Lord had instilled a divine, delicious taste into the eggplant shaak, and consequently, everyone asked for more and more of it, and refused to take any of the ladoos. In this manner, a grand Shakotsav festival was held in the village of Loya. Traditionally, bajra-na rotla (millet flour bread) are mixed and prepared by hand and then cooked on clay skillets.

As such, the Shakotsav festival is a one-of-a-kind festival, unique only to the Swaminarayan Sampraday. His Divine Holiness Acharya Swamishree has performed grand Shakotsavs all throughout the world, re-enacting Lord Shree Swaminarayan’s divine episode, which occurred nearly 200 years ago. He has prepared shak, rotla, and ladoos and served all of these to His disciples. During the Shakotsav, Acharya Swamishree teaches the importance of servitude to disciples. Even though it is eggplant shaak that the Lord and Acharya Swamishree serve to disciples, this is symbolic of the gnaan (religious knowledge) and key to absolute salvation that they are serving to us. While we may perform seva and bhakti to please and serve the Lord, it is truly the Lord and His Satpurush who practice ultimate servitude unto disciples.

Acharya Swamishree re-enacted the famous Shakotsav episode for the first time in North America, on Saturday, August 4th, 2018, at Shree Swaminarayan Temple – Secaucus, New Jersey. Disciples from all over North America and the world gathered for this event hosted in New Jersey in celebration of the temple's 17th Patotsav. The event was called “Divya Shakotsav” or “Divine Shakotsav,” as all the episodes performed by the Lord and His Satpurush are truly divine.

A small village of “New Loya” was hand-constructed in the temple’s large parking lot with the idea of making everyone feel as if they were in Gujarat’s Loya gaam in Samvat 1877. When the first European settlers migrated to the Americas, they would often name their new towns, cities, and states in honor of their hometowns or places near and dear to them – along with the prefix “New.” New Jersey and New York were both named in this manner. Likewise, for the disciples of Maninagar Shree Swaminarayan Gadi Sansthan, Loya gaam is very dear to them for the many divine episodes performed by Lord Shree Swaminarayan there. They, therefore, named this new village “New Loya” in honor of the original Loya, but also in the hopes that they, too, could experience the same divinity felt by sants and disciples with Lord Shree Swaminarayan in Loya gaam in the state of New Jersey in the presence of Acharya Swamishree. Lord Swaminarayanbapa Swamibapa and Acharya Swamishree made this wish come true!

A grand stage, on which Lord Shree Swaminarayan, Jeevanpran Shree Abji Bapashree, Jeevanpran Shree Muktajeevan Swamibapa, and Acharya Swamishree would preside, was constructed with hand-painted and embroidered tapestries and intricately-carved designs. A large gate was erected at the entrance of the village, resembling the grand gates one may see at the entrances of villages in India. The sides of the village were lined with merchants and shops named after Shreejimaharaj and our Nand-Padvi sants – Shreeji Shaak-Bhaaji, Gopal Super Market, Mukta Kitchenware, Brahma Books, Nitya Ethnic Wear, Shuk Snacks, and Prem Jewelers. These shops sold fresh fruits and vegetables, freshly-prepared snacks, religious scriptures, traditional clothing, and more. To complete the scene, disciples were dressed in rabari clothing from the time period and ready to celebrate! Sants and disciples worked day and night to create the scene, and Acharya Swamishree Himself had stopped by during the preparations to track progress and give all the volunteers His blessings. All the effort was, and always is, completely worth the bliss experienced in the end!

During the morning of the Shakotsav, Acharya Swamishree visited the temple kitchen to start preparations for the evening’s meal. He prepared the vaghaar (tempering) and cooked the eggplant shaak with a variety of spices for all His disciples. He also hand-shaped and cooked bajra-na rotla. This was an amazing experience to witness for sants and disciples who were present in the kitchen at the time – Acharya Swamishree was demonstrating the true meaning of “dasanadus” and service before self.

Around 5 PM, Acharya Swamishree, sants, and disciples performed sandhya aarti and niyams, and everyone was given the opportunity to have new hindola darshan – a hindolo made of fresh fruits and vegetables in celebration of the Shakotsav. Acharya Swamishree gently swung Lord Shree Swaminarayan, Jeevanpran Shree Abji Bapashree, and Jeevanpran Shree Muktajeevan Swamibapa seated on this grand hindolo. He then offered fresh bajra-na rotla, maakhan (fresh butter), ghor (jaggery), eggplant shaak, ladoos, and several other food items to Lord Swaminarayanbapa Swamibapa inside the temple.

Then, the moment everyone had all been waiting for – Acharya prepared a fresh eggplant shaak on stage. From adding mustard seeds and cumin to the hot oil, to mixing in tumeric and red chili powder into the shaak, Acharya Swamishree prepared it from start to finish. The entire congregation had the darshan of this divine event, and the delicious scent of the eggplant shaak and the vaghar wafted throughout the audience. It was a sight and an experieince everyone will behold forever. Acharya Swamishree offered fresh bajra-na rotla, maakhan (fresh butter), and ghor (jaggery) to Lord Shree Swaminarayan, Jeevanpran Shree Abji Bapashree, and Jeevanpran Shree Muktajeevan Swamibapa, who were all bestowing their divine darshan on the grand stage.

Afterwards, Shree Muktajeevan Swamibapa Pipe Band USA performed a riveting stage show for the Lord and Acharya Swamishree. The band members were dressed in traditional ethnic regalia, and they incoroprated Indian dhols and dholaks into their bagpipe tunes.

To conclude the evening, sants performed an exciting and engaging utsav, singing thaal and the praises of Lord Swaminarayanbapa Swamibapa to the accompaniment of Indian percussion instruments – tabla, bhamka, and mangira. Acharya Swamishree then once again presided upon the grand chariot and was escorted out of New Loya and back to the temple. He joyously bestowed His divine darshan upon all the souls who were enlightened by the evening’s divine event – Divya Shakotsav.

Disciples then proceeded to the front of the temple to enjoy delicious mahaprasad, consisting of the eggplant shaak and bajra-na rotla prepared by Acharya Swamishree Himself along with with maakhan, khichdi, kadhi, and sheero. Volunteer disciples then proceeded to deconstruct the New Loya scene and prepare for the next morning’s Patotsav ceremony. 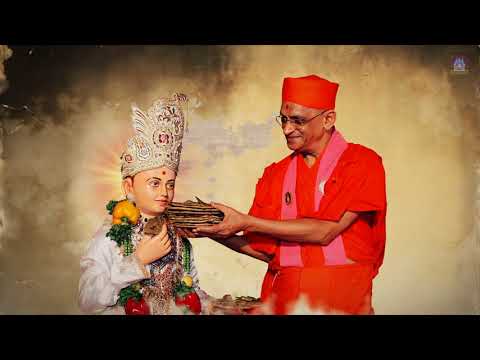 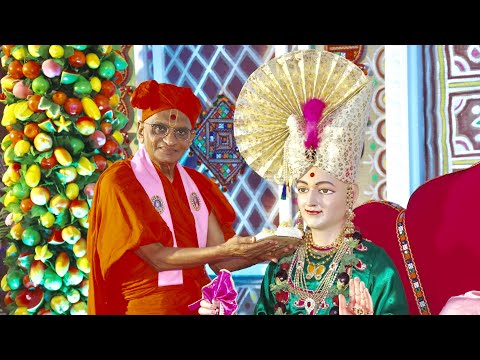 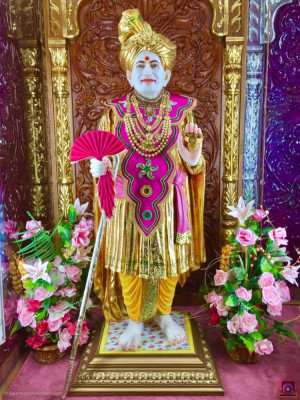 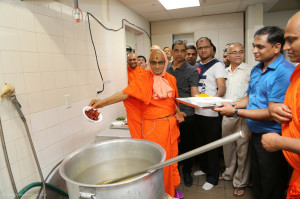 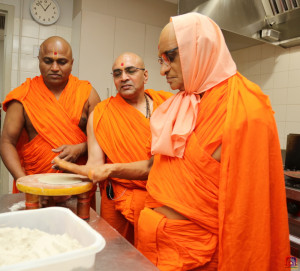 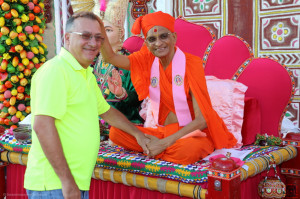 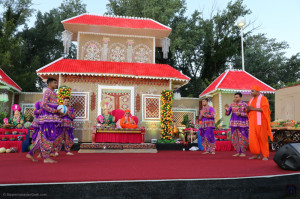 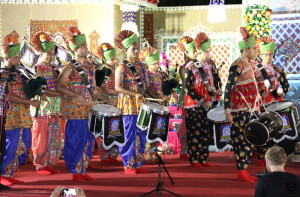