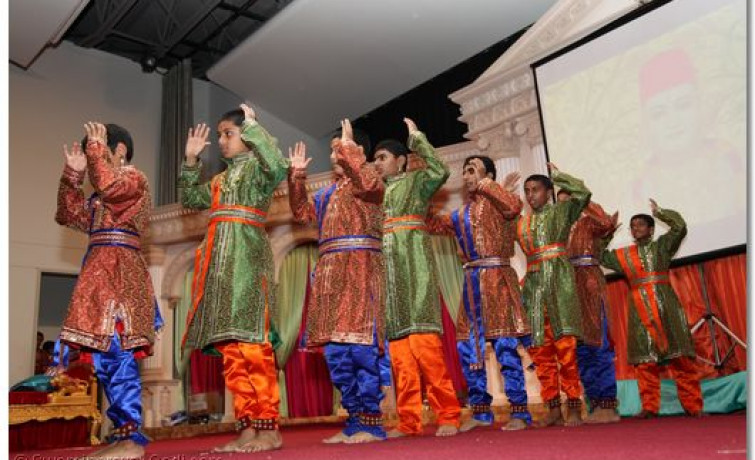 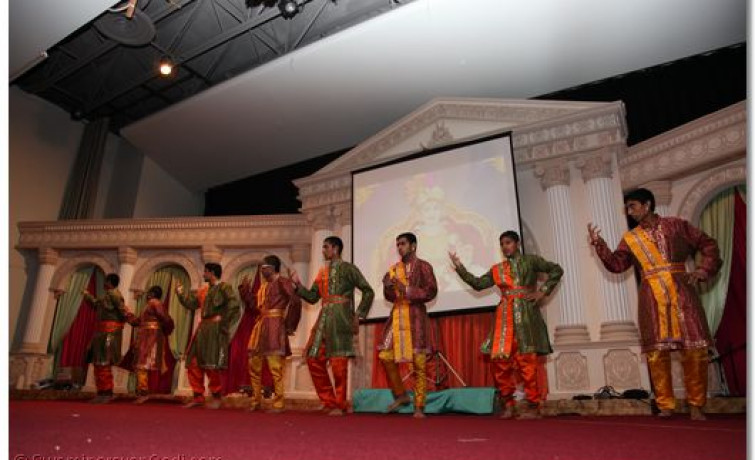 The morning of August 6th, 2011, the Dashabdi celebrations continued. Around 8 am, a swagat yatra was led from the small temple parking lot, around the temple, and to the main entrance of the temple. Swamibapa Pipe Band led the parade, His Divine Holiness Acharya Swamishree was seated on the beautiful chariot, and sants and disciples walked along in the procession. Vachanamrut parayan sponsors then welcomed Acharya Swamishree back at the temple (punkhvaanu), performed aarti, and carried him into Swamibapa Hall.

After the conclusion of the scripture recitals, Vachanamrut parayan sponsors carried chhaabs of offerings into Swamibapa Hall for Lord Swaminarayanbapa Swamibapa and Acharya Swamishree. They also performed aarti. Acharya Swamishree then showered His divine ashirwad upon the congregation.

In His blessings, Acharya Swamishree described the characteristics of a chaste disciple. We should only take virtues, not the bad characteristics, from others. One should always remember that everything happens by the will of the Lord; if He does not become the doer of your activities, nothing will be accomplished. A mumukshu should stay away from the four types of immoral associations, especially nastik and vedanti. A nastik does not believe in God at all, and a vedanti believes God has no form. The Lord protects you from all evil if you take His refuge. Only a chaste devotee can take His refuge. One who demerits and finds faults in Lord Shree Swaminarayan and Shree Swaminarayan Gadi is also an immoral association. We should believe the words of the Lord and His Satpurush to be the truth and never disobey their commands. One should use his or her words wisely; we should be very careful of what we say. We never want to be mistaken or judged poorly because of the way we speak. Our words should be respectful and likable by others.

After Acharya Swamishree's blessings, Vachanamrut parayan sponsors were presented with prasad paags and saals. Acharya Swamishree also inaugurated several new scriptures and religious works: a kirtan book featuring transliterated kirtans from Gujarati to English to promote kirtan-bhakti amongst the temple's youth (specially prepared by disciples in honor of the Dashabdi Mahotsav), Hari Lilamrut, and Sadachar Sandesh. Acharya Swamishree was then escorted out of Swamibapa Hall. Maha-prasad was served to all, and this concluded the morning portion of the day's celebrations.

It should also be noted that during the morning's sabha, a blood drive was held. The New Jersey Blood Services donation vehicle came outside the temple and accepted donations throughout the morning and early afternoon. Many disciples donated their blood with the assistance of local nurses. Acharya Swamishree always says that donating blood or organs and participating in other types of community services are also a type of devotion and seva. The Swaminarayan religion stresses placing humanity and others before oneself; therefore, even donating one's blood for the greater good of saving someone's life makes the Lord equally as proud as performing any other type of devotion.

The entire week had been incredibly hot and humid, and everyone knew intense rain was on its way to cool everything down. The day before and all morning long, the forecast called for heavy rain and thunderstorms in the afternoon. Many feared the nagaryatra would be rained out, but everyone remembered that by the grace of Lord Swaminarayanbapa Swamibapa, no parade of Shree Swaminarayan Gadi Sansthan ever gets rained out. There may be rain before, or there may be rain afterwards, but there will never be rain during the parade. Keeping this in mind, hundreds of disciples excitedly flocked over to the beginning of Paterson Plank Road for the start of the Dashabdi Mahotsav nagaryatra.

Despite the iffy weather, many residents of Secaucus came out of local shops, restaurants, and homes to view and witness the grand parade. They snapped photos on their cameras and phones and recorded videos with their camcorders. Many stopped in their cars and looked out their windows. Acharya Swamishree and Lord Swaminarayanbapa Swamibapa bestowed their divine darshan upon them all. It was a beautiful nagaryatra to be seen by all.

Not a single drop of rain fell during the entire procession and nor did a single drop of sweat. With Lord Swaminarayanbapa Swamibapa's blessings, a cool wind blew throughout the entire parade so that the pipe band members, dancers, and other disciples would not experience any fatigue. The nagaryatra peacefully made its way down Paterson Plank Road to its endpoint, Secaucus City Town Hall. As soon as Acharya Swamishree descended from His chariot, the first few drops of rain fell, and a tranquil drizzle followed. Swamibapa Pipe Band saluted Acharya Swamishree and the city's councilmen at the Town Hall, and everyone then made their way back to the temple for the evening program.

Maha-prasad and ice cream with Flakes chocolate were served after the nagaryatra.

Acharya Swamishree, sants, and disciples then filed into Swamibapa Hall for the evening's program. To start off the night, a 22-minute dance called "Shangar Darshan" was performed by young disciples. The performance featured a slide show of the divine murtis of Lord Swaminarayanbapa Swamibapa across the globe adorned in different beautiful garments and ornaments.

Following the performance, the Dashabdi Mahotsav documentary was shown. This hour and a half-long documentary showed and explained the establishment of Shree Swaminarayan Siddhant Sajivan Mandal, U.S.A. during Jeevanpran Shree Muktajeevan Swamibapa's visit to the United States in 1970, the progress of the Sanstha in the United States under Acharya Swamishree's leadership in the 1980s and 1990s, the ground-breaking ceremony of Shree Swaminarayan Temple New Jersey in 1998, the Murti-Pratishtha Mahotsav of the temple in 2001, and the temple's development during the past decade. The documentary featured interviews from sants and leading disciples and never before seen video clips of historic events throughout the Sanstha and temple's history. The documentary brought back many memories to disciples who had experienced the events shown and also enlightened younger disciples with new and fascinating knowledge about the temple and organization.

Once the documentary finished, Acharya Swamishree was escorted out of Swamibapa Hall, and the final night program of Shree Swaminarayan Temple New Jersey's Dashabdi Mahotsav concluded. 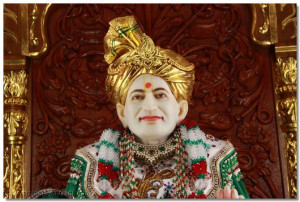 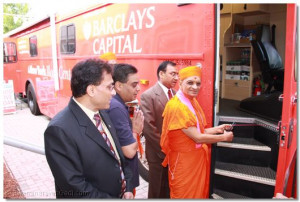 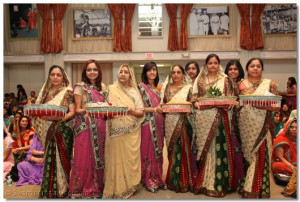 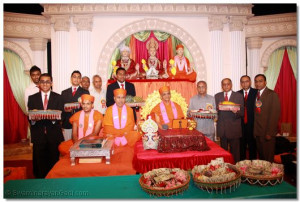 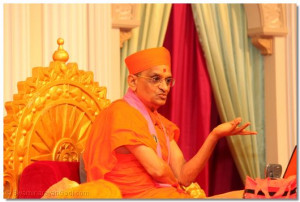 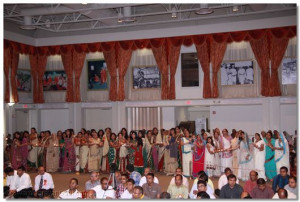