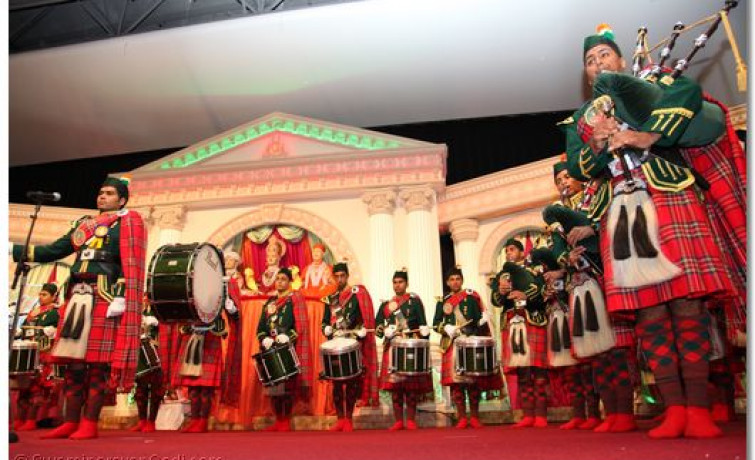 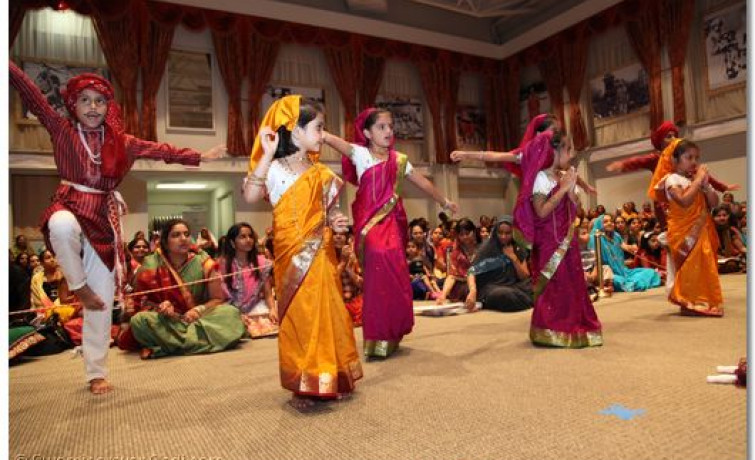 The Dashabdi Mahotsav celebrations continued the morning of August 5th, 2011. At 7 am, disciples sponsoring the large Vachanamrut parayans performed maha-pooja in Swamibapa Hall. Afterwards, a swagat yatra was led from the small temple parking lot, around the temple, and to the main entrance of the temple. Swamibapa Pipe Band led the parade, His Divine Holiness Acharya Swamishree was seated on the beautiful chariot, and sants and disciples walked along in the procession. Vachanamrut parayan sponsors then welcomed Acharya Swamishree back at the temple (punkhvaanu), performed aarti, and carried him into Swamibapa Hall.

In His ashirwad, Acharya Swamishree said Lord Swaminarayanbapa Swamibapa manifested on Earth to grant His murti and bestow eternal salvation. The Lord and His Satpurush lead us on the right path; it is our duty to follow it. The time spent pleasing the Lord, i.e. singing kirtans, reading and listening to religious discourses, performing dances, doing decorations, etc., is time well-spent. This devotion will lead one to remember His Murti in his or her last moments. Someone who abandons his arrogance with respect to the virtues within himself and has faith in the Lord and His sants, attains a high status. Someone who relinquishes the faults within himself, acknowledges the virtues that exist in the Lord and His disciples, who behaves in accordance with the commandments given by Him and His sants, remains distant from any objects and bad company that could cause him to become bound to them, and accepts good thoughts is a prudent person. A prudent disciple keeps his speech, behavior, and thought in line with the religious decree. Our behavior should be such that it inspires others to join the Satsang. In order to achieve the Lord's Akshardham, we should work together with everyone and create unity. The Lord showers His mercy upon disciples who show unity.

After Acharya Swamishree's divine blessings concluded, He was escorted out of Swamibapa Hall, and everyone was served maha-prasad lunch in the tent outside.

Bapashree Ni Vaato samuh parayans and scripture recitals by sants in the presence of Acharya Swamishree continued in the afternoon. Several disciples from the advanced religion class gave speeches about the glory of the Lord. Afterwards, the stage curtains closed, and sants and disciples began to assemble something behind them. After they were done setting up, the curtains opened to reveal something that had never been done before in Shree Swaminarayan Gadi Sansthan. Rangotsavs, shakotsavs, etc. have been celebrated in the past, but for the first time in history, a chocoutsav was celebrated. Disciples had prepared over 140 different items made from or with chocolate to offer to the Lord during this very special occasion, and they were all assembled in front of Acharya Swamishree who was seated on His gadi. The setup also included chocolate fountains and a large ice sculpture of the Dashabdi Mahotsav logo. Acharya Swamishree offered chocolate cake to Lord Swaminarayanbapa Swamibapa in honor of the occasion and also for His 69th birthday. Then He began to dance upon His gadi, and the entire congregation joined in. The chocolate prasad was served to everyone along with maha-prasad, and the chocolate fountains were made available to the public to dip fruits. Vanilla ice cream with Flake chocolate bars was also served as prasad. This unique celebration, the chocoutsav, was a wonderful event for all who were present. 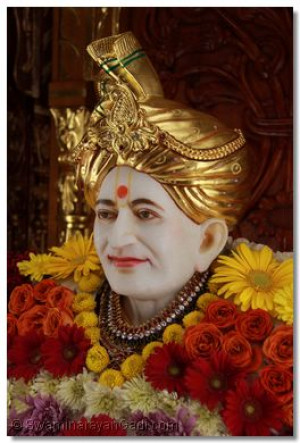 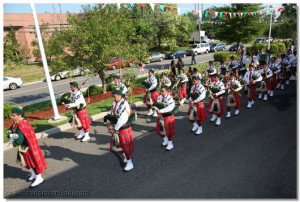 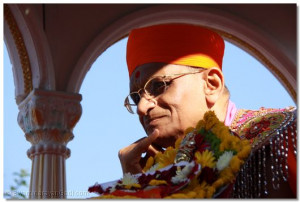 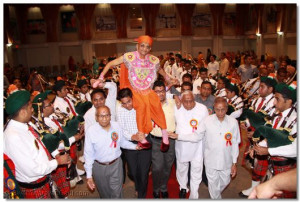 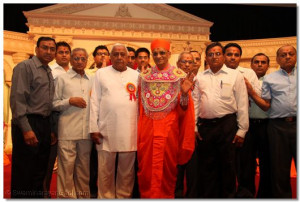 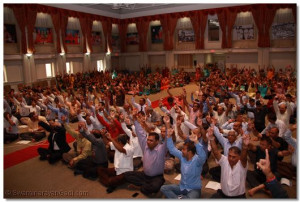