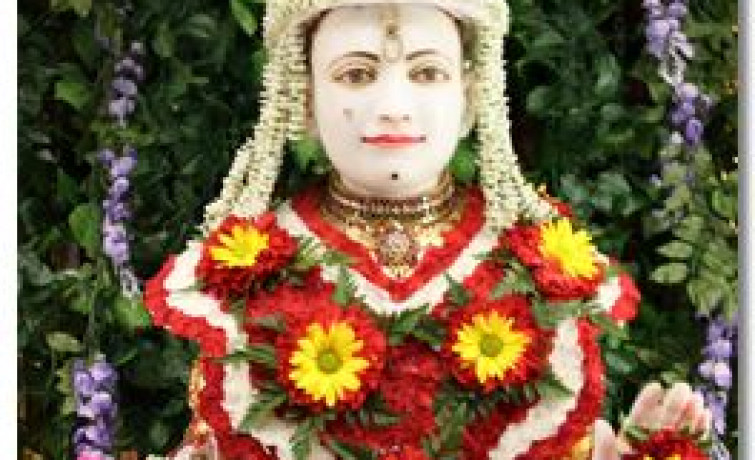 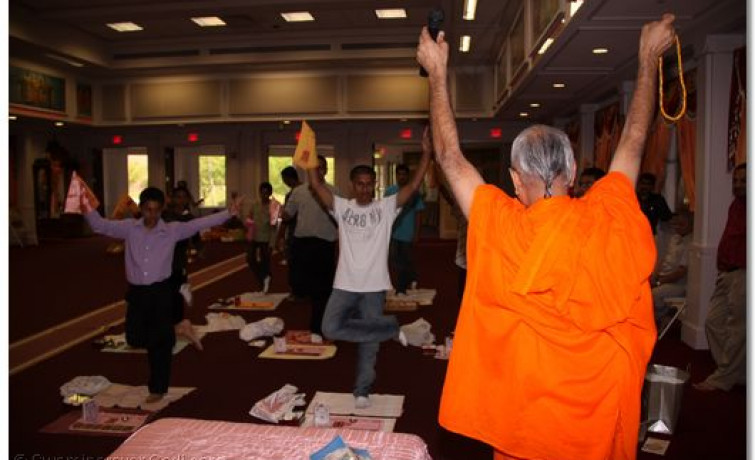 In the United States, Father’s Day is celebrated each year on the third Sunday of June to honor fathers and their influence on our lives.  Children usually buy or make cards and gifts for their fathers on this day to show how much they love and appreciate them. Disciples of Shree Swaminarayan Gadi Sansthan affectionately call Lord Swaminarayanbapa Swamibapa and His Divine Holiness Acharya Swamishree “Bapa,” which translates to “father.” Although we have our paternal fathers, the Lord and Acharya Swamishree are our true fathers. This year, the disciples in the United States were very fortunate to be able to celebrate Father’s Day in the presence of Acharya Swamishree and sants. As a Father’s Day “gift” for the Lord and Acharya Swamishree, the Youth Mandal organized and conducted a “Father’s Day Celebration.” The event required several months of planning and preparation, but with the grace of the Lord, everything came together into a phenomenal event in the end.

After Sandhya aarti on Sunday, June 20th, 2010, disciples eagerly gathered in Swamibapa Hall for the event. The stage curtains then slowly opened to reveal the surprises behind them. The stage was decorated with trees, vines, animals, and a waterfall to create a complete jungle scene, and sounds of chirping birds and trickling water filled the air. As disciples tried to take in the incredible effect of the scene, they couldn’t help but gaze upon the divine murti of Acharya Swamishree, who was standing on His Gadi adorned in flower vaagha, smiling and bestowing His divine darshan upon the entire congregation. The divine murtis of Nilkanth Varni and Jeevanpran Shree Muktajeevan Swamibapa were at His sides, and the sants were seated on either side of the Gadi. This was truly a spectacle to look upon.

Shortly, music began to play, and young disciples entered through all the doorways and performed a welcome dance for Acharya Swamishree. Near the end of the performance, disciples walked down the aisle carrying a flower mugat, and they and Acharya Swamishree adorned Jeevanpran Swamibapa with it. The kirtan to which the disciples danced to was specially written and recorded by members of the Youth Mandal for the event. After the performance, Acharya Swamishree cut celebration cakes for both Father’s Day and His 68th birthday. He then sat down on His Gadi and showered His blessings upon the children of Shree Swaminarayan Gadi Sansthan.

In His divine ashirwad, Acharya Swamishree explained that our true father is Lord Shree Swaminarayan. On Father’s Day, it is typical of children to give their fathers material gifts, but the Lord does not need His children’s money or any material gifts. More than anything, He wants their love and devotion, and He wants their promise to be good disciples of Shree Swaminarayan Gadi always. No money can ever match love and devotion, as they are priceless and come from the heart. Give the Lord your love and be a good disciple not only on Father’s Day, but every day.

After Acharya Swamishree’s ashirwad, the evening’s performances continued. Disciples performed skits from Shree Ghanshyam Baal Lila, a Qawali, and a bamboo dance. Each of the performances was very well coordinated and done. At the end of the celebration, Acharya Swamishree gave darshan to all the young participants on stage, and everyone then danced to “Jay Jay Swamibapa.” The kirtan was very appropriate for the occasion because Jeevanpran Swamibapa’s dream of a strong and flourishing satsang in the United States was very much a reality that night. 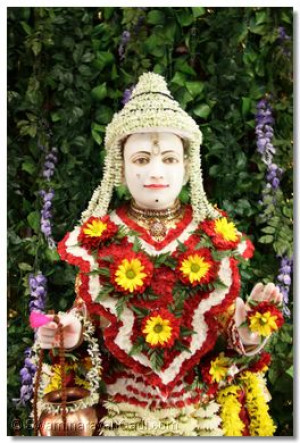 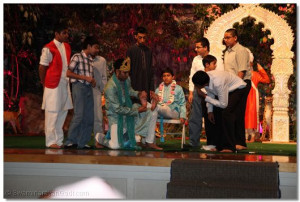 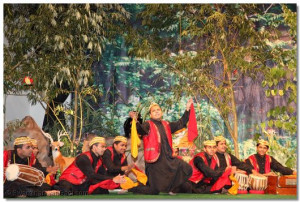 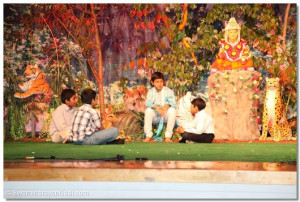 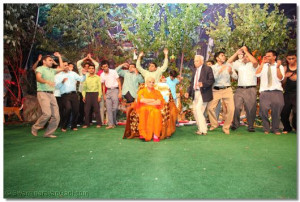 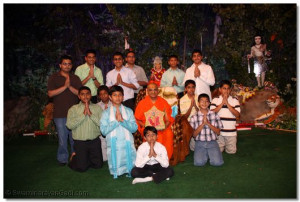