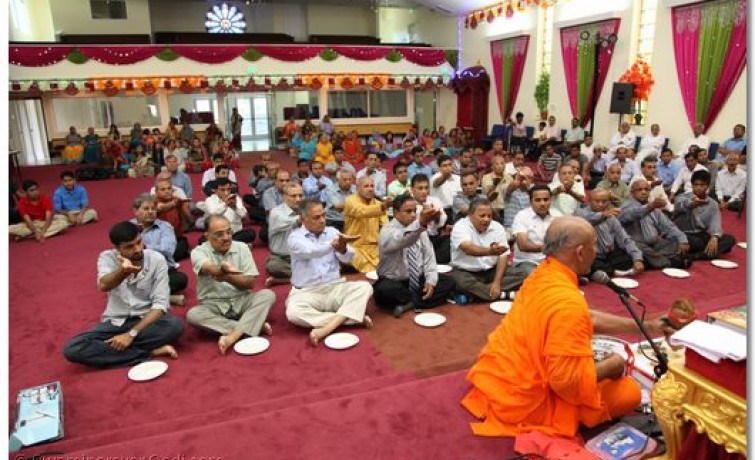 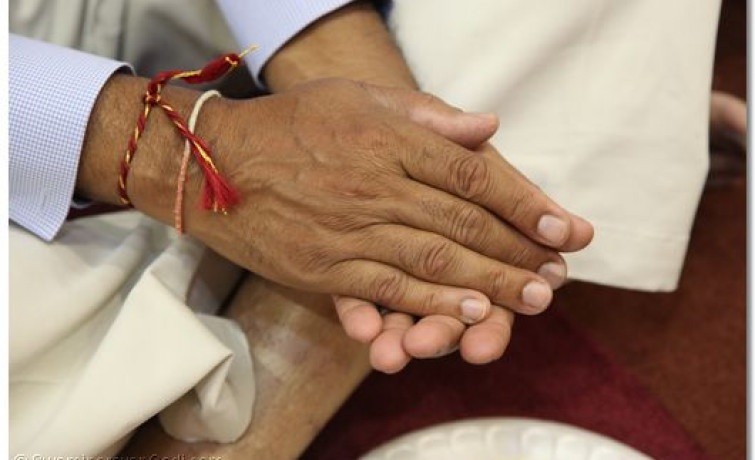 Just over a year ago, by the divine grace of Lord Swaminarayanbapa Swamibapa, an old church property in Van Nuys, California, just minutes away from downtown Los Angeles and Hollywood, was acquired by Shree Swaminarayan Siddhant Sajivan Mandal, West Coast. Today, this property has been renovated and transformed into a beautiful temple – Maninagar Shree Swaminarayan Gadi Sansthan’s first temple on the West Coast of the United States. Shree Swaminarayan Temple Los Angeles will be yet another home for Lord Swaminarayanbapa Swamibapa on this Earth, and all moksh-seeking souls who arrive at the doorstep of this temple will be bestowed with the same darshan and blessings that the Lord gives in Akshardham, His eternal lustrous abode.

Inspired by His Divine Holiness Acharya Swamishree and with the Lord Swaminarayanbapa Swamibapa’s blessings, the four-day Murti Pratishtha Mahotsav of Shree Swaminarayan Temple Los Angeles, for which sants and disciples had been rigorously preparing for months, commenced on Thursday, July 19th, 2012 with a truly memorable kick-off program at the scenic Oxnard Beach along the Pacific Ocean.

Around 9 AM, Acharya Swamishree and sants departed the temple for the private beach on the California coast. Six busloads of disciples from all over the world followed them. After the hour-long drive, everyone descended onto the warm sands and walked towards the waves of the vast Pacific Ocean, the Earth’s largest body of water. The view of the private beach, the tropical palm trees, the water, and the mountains in the background was absolutely breath-taking, peaceful, and serene.

Soon after arriving, excitement quickly built up, and sants and disciples rushed towards the ocean waves to bathe and play in them. Acharya Swamishree joined them shortly afterwards, and as soon as He step foot in the water, the entire mass of the Pacific Ocean became consecrated for eternity. All of the sants and the hundreds of disciples cheered with joy as they witnessed this historic moment.

Upon completing the panchamrut snan ceremony, the congregation proceeded to the picnicking area on the beach. Acharya Swamishree and sants enjoyed a delicious picnic lunch, and disciples enjoyed maha-prasad.

After lunch, sants and disciples gathered on the lush green fields to play Gurudev Jeevanpran Shree Muktajeevan Swamibapa’s favorite sport, cricket. Acharya Swamishree bestowed His divine darshan whilst the play was going on, and all those who had gathered really enjoyed themselves.

Shortly after 1:30 PM, everyone filed back onto the buses to head back to the temple. The Murti Pratishtha Mahotsav had just begun, and truly wonderful memories were already being made. The beach program, panchamrut snan ceremonies, picnic lunch, and cricket made for a very wonderful morning and early afternoon that all those who were present will remember forever.

The first day of the Murti Pratishtha Mahotsav celebrations continued. At 4 PM, disciples participated in samuh parayan mahapooja. The first day coincided with the very auspicious day of Sadguru Din, specifically the Sadguru Din before the start of Shravan maas, the month of Chaturmas when disciples perform extra devotion to the Lord. In celebration of this day, Acharya Swamishree, sants, and disciples performed half an hour of meditation upon the Lord’s murti (dhyaan).

Afterwards, Acharya Swamishree showered His divine blessings upon the entire congregation. Acharya Swamishree explained the importance of Sadguru Din. It is the day to gauge our progress in the religion in terms of our love and affection towards God, our ability to perform meditation (dhyaan), and our spiritual knowledge (gnan).

Acharya Swamishree also explained that disciples should always understand that the three forms of the Lord – His human form, His idol form, and the Lord that resides in Akshardham, are exactly the same. Not an iota of difference exists between these three forms. Just as the Lord graced the Earth with His human form over 200 years ago, and just as the Lord resides in Akshardham, this same divine murti will come and reside in this magnificent temple in Van Nuys, California in the idol form.

Acharya Swamishree continued to explain the importance of meditation. To be an ardent disciple, one must perform meditation every day to establish a firm, strong foundation in the religion and in the Lord’s divine, lustrous murti. In order to perform mediation properly, it is of utmost importance to keep the ten indriyas and the four antha-karans under control. Just as it is importance to build upon our ability to meditate, it is also important to increase our spiritual knowledge by reading the scriptures and associating with sants.

In addition, Acharya Swamishree explained that in order to please the Lord, one should not give into what his or her heart desires, but should instead follow every command prescribed by the Lord and His Satpurush. By identifying oneself to be the soul and not the body, and by having unfaltering love and affection towards God, one’s intense passion completely recedes. Only the Lord and His Satpurush have the best interest of the soul and are the well-wishers of the souls in this world. They dislike quarrels and become displeased by such activities. A mumukshu, a soul, that is seeking salvation should keep the three attributes – rajas, tamas, and satva, in check to continuously please the Lord and His Satpurush.

After Acharya Swamishree completed His divine ashirwad, He momentarily left the temple prayer hall, but just a few minutes later, He entered through the main doors of the prayer hall in beautiful handmade fresh flower vagha and a flowing cape. Disciples were truly in admiration by gazing upon Acharya Swamishree.

Acharya Swamishree then stood upon a raised gadi, and as He looked below to the loving disciples gathered around Him and the music started to play, He jovially began to dance.  Instantly, all of the sants and disciples started to dance, clap, and sing along. This commenced the samuh raas for the evening. Sants and disciples danced the night away to wonderful and exciting upbeat kirtans around Acharya Swamishree, whose gadi was slowly spun around throughout the night so that He could bestow His divine darshan upon all the disciples around Him. Just as everyone enjoyed themselves at Oxnard Beach, everyone enjoyed themselves during the samuh raas. This evening will certainly be remembered by all.

After the samuh raas had finished, maha-prasad was served to all. This concluded the first day of the Murti Pratishtha Mahotsav of Shree Swaminarayan Temple Los Angeles. 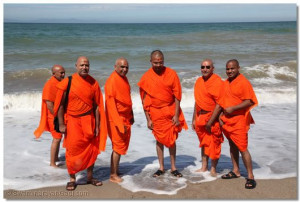 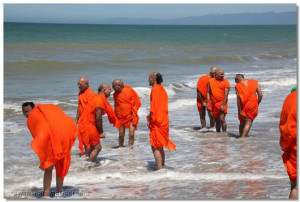 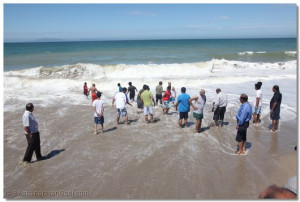 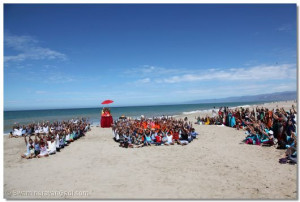 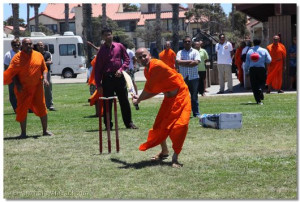 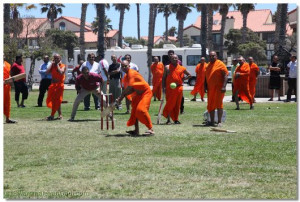