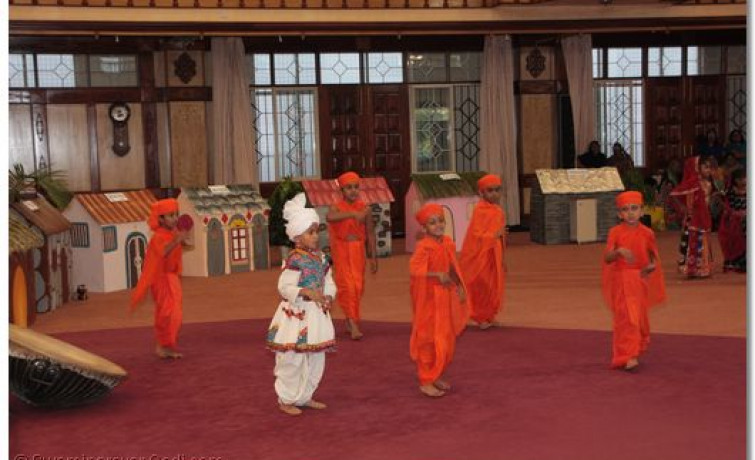 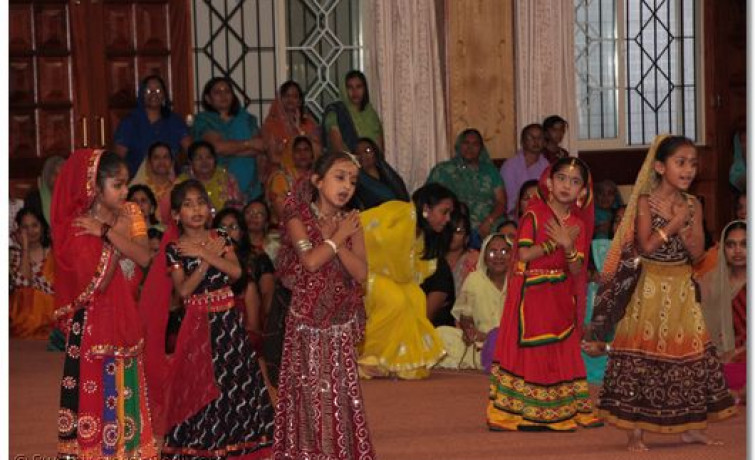 On 28th December 2008, under the divine inspiration of HDH Acharya Swamishree Purushottampriyadasji Maharaj, the teachers and students of Swamibapa Education Centre presented a religious educational programme entitled 'Satsang Gnan'. Each and every student took part in this highly talented programme.

On 28th December 2008, under the divine inspiration of HDH Acharya Swamishree Purushottampriyadasji Maharaj, the teachers and students of Swamibapa Education Centre presented a religious educational programme entitled “Satsang Gnan.” Each and every student took part in this highly talented programme.

The events of the programme were:-

The Satsang Gnan programme commenced with this humble prayer to Lord Shree Swaminarayan. It was sung in chorus by all the students and teachers of Swamibapa Education Centre.

This was performed by the Nursery Class. Students aged 5-8 years performed this play. The theme of this short play was to educate the audience on the manifestation places of our guruparampara (supreme lineage of spiritual leaders), starting from Lord Swaminarayan to HDH Acharya Swamishree. Students taking the roles of our guruparampara hid in huts marked with their manifestation place and the rest of the team would seek them from those respective huts. For example, Ghanshyam Maharaj would hide in a hut marked Chhapaiya.

This was performed by students aged 11-13 years. They were divided into five groups of four students in each group. A spinning wheel divided into eight sectors marked with the names of our guruparampara was spun by each student. One sector was left as a free choice, whereby the student had a chioce to pick on any sector of his chioce. The quiz master asked a question depending on where the wheel stopped. In the first round, the questions were asked to each individual student while the second round was a group discussion question. The students diligently answered the questions and three teams took first position with equal marks.

This was one of the most epic performance by students aged 9-11years. A number of students took the roles of individuals from our Karan Satsang. Each student, disguised in costumes relating to those characters, came in front of the audience and quoted an eminent phrase or two said by those individuals and then asked the audience for their identification. If the audience could not give their true identification, the character gave his or her true identity amid loud applause from hundred of audience who had gathered to witness this superb Satsang Gnan programme.

Students aged 13-18years took part in this Gnan quiz. Students were divided into two groups of boys and girls. The questions were grouped into three categories of white, blue and pink card questions with marks of 2, 4 and 8 respectively. All the questions related to our Karan Satsang. The first and second round questions from white and blue cards were asked to individuals, while the final round had an option of picking the blue or pink card question. For pink card questions, the students were allowed to discuss the answer among their group and one team member answered the question. Eight marks were awarded for the correct answer. The contest between the two groups was so tight that the girls eventually outscored the boys but only by a single mark.

The audience was stunned by the religious knowledge (satsang gnan) gathered by the students at such a tender age.

The presence of HDH Acharya Swamishree throughout the programme gave encouragement to all the participants to perform to their utmost capabilities. 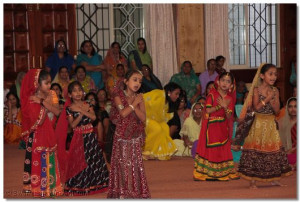 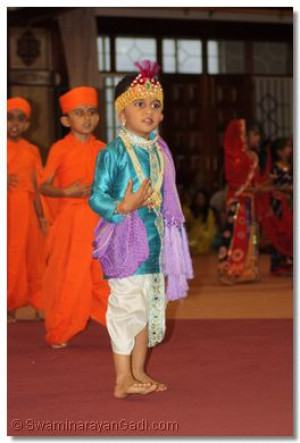 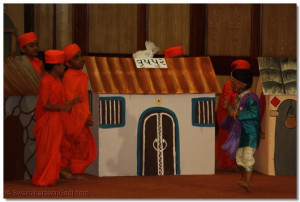 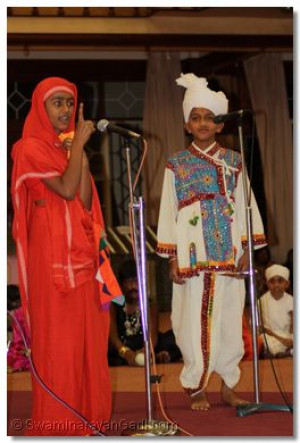 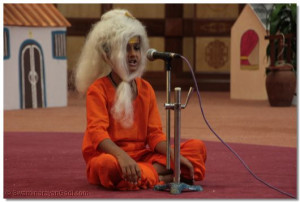 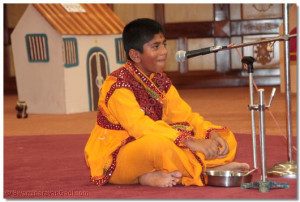