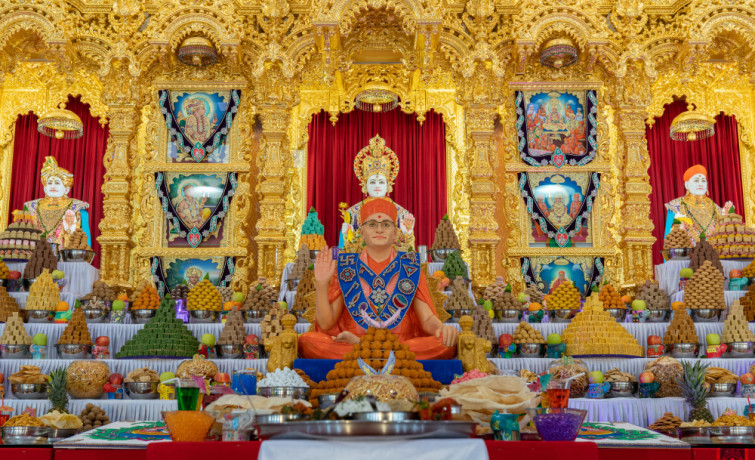 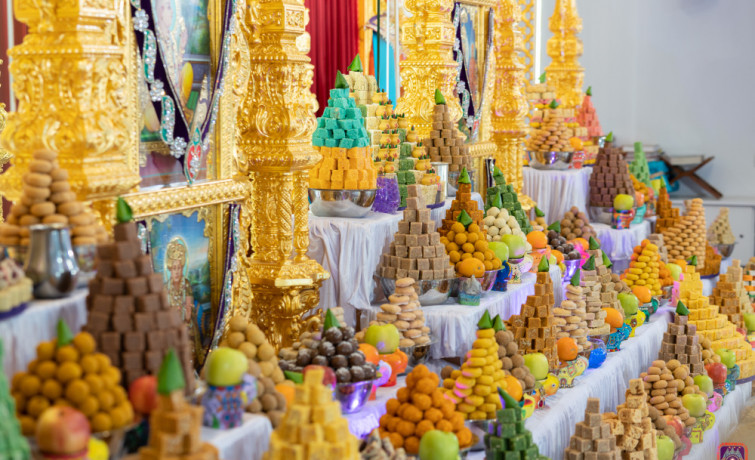 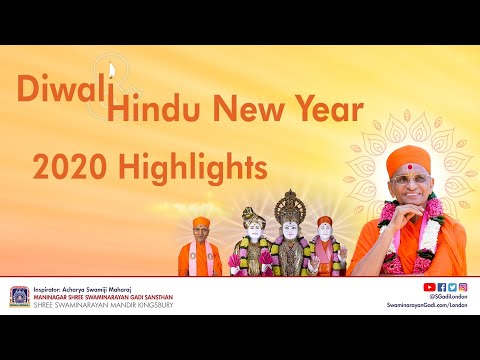 Diwali and Hindu New Year Celebration at Shree Swaminarayan Kingsbury took place over the weekend of Saturday 14th and Sunday 15th November 2020, as they did for worldwide Mandirs of Maninagar Shree Swaminarayan Gadi Sansthan. This year’s celebrations were dedicated in commemoration of our beloved Acharya Swamishree Maharaj, who withdrew His human darshan from this world earlier this year. All the events during this auspicious period were in memory of His remarkable life, in celebration of the treasure trove of teachings He gave us, and in appreciation for the essential values that He enlightened our lives with.

Given the circumstances across the UK at this time, Kingsbury Mandir was closed to the public over the festive period and so all events, including special sabhas for Diwali, and Annakut and Shree Sadguru Din, were held online. Ceremonies took place at the Mandir and disciples viewed these as families and households from their homes.

Saturday 14th November saw the Diwali Sabha, which began with Sandhya Aarti and niyams, followed by katha by Sadguru Shree Bhagwatpriyadasji Swami that took place earlier in the day, during the Diwali sabha at Shree Swaminarayan Mandir Maninagar. The Sabha ended with a special video, “A Year to Remember”, highlighting the key events and memories through the last year. Beginning with Diwali 2019, when thousands joined us at the Mandir to have the darshan of the magnificent Annakut, the video celebrated the numerous religious, community and charitable activities and events held during the year, including the amazing  food collection and distribution by the Mandir community during the first lockdown throughout the summer, and numerous online sabhas held during these extraordinary times. These memories showed that despite the inability to congregate at the Mandir for much of the year, the social, spiritual and cultural values of the Mandir community, inspired by Acharya Swamishree Maharaj, were as strong as ever and shone throughout the year.

Sunday 15th November was Annakut and Shree Sadguru Din sabha, with Hindu New Year falling on the following day this year due to the specificities of the Hindu lunar calendar. Celebrations began with Annakut aarti at 8am, with Lord Shree Swaminarayanbapa Swamibapa and Acharya Swamishree Maharaj presiding amongst a wonderful grand food display. Many of today’s celebrations were naturally different with them being online only, but the celebratory spirit of the community was not diminished one iota – nowhere was this more apparent than during a special ‘Zoom Oochav’, where dozens of young disciples played their tablas and other instruments during this traditional part of today’s celebrations, all linked in via Zoom. All the while, those viewing online had the darshan of today’s Annakut, perhaps in even more close detail than they would have had in person.

Since today was also Shree Sadguru Din, dhyaan and Sansmaran Kirtan were also performed by all, in between which a special video of Jeevanpran Swamibapa’s Ashirwad, followed by Acharya Shree Jitendriyapriyadasji Swamiji Maharaj’s Ashirwad, were enjoyed by all. Acharya Swamiji Maharaj explained that today was a most auspicious occasion as it marked five special events – the last day of the year, Diwali, Sadguru Din, Chopda Poojan, and Annakut. He explained that just as on this, the last day of the year, we close and review our accounts and ledgers for the year, in religious terms, we must complete our spiritual accounts – meaning that we should pray to the Lord, ‘Oh Lord! Please show us mercy and forgive any knowing or unknowing mistakes that we will have made throughout the previous year; forgive us for any of the Lord’s wishes we may have contravened; forgive us for any doubts in our faith that may have arisen; and forgive any disrespect that may have been inadvertently shown towards God, His Muktas or His sants or disciples.’ In this way, Acharya Swamiji Maharaj explained the true significance of the Diwali and Hindu New Year period – a time to close the previous year with humble prayers of forgiveness and start the new one afresh. This concluded today’s unique celebrations. 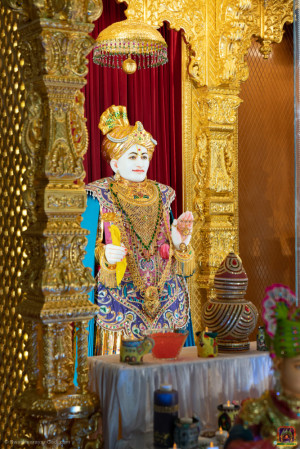 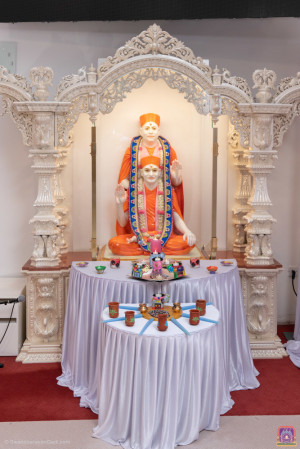 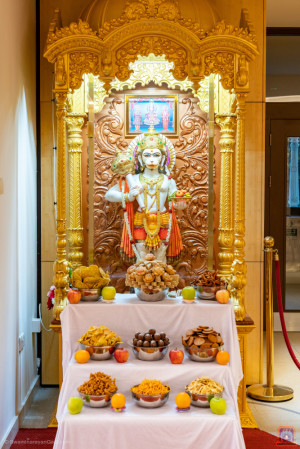 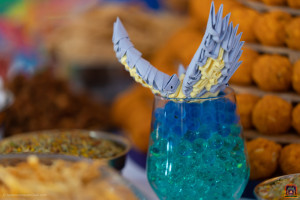 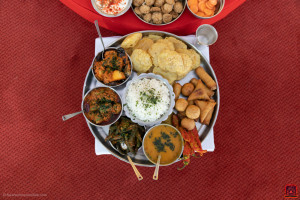 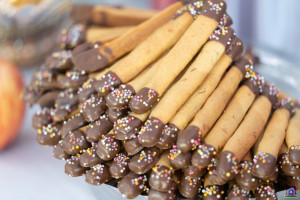