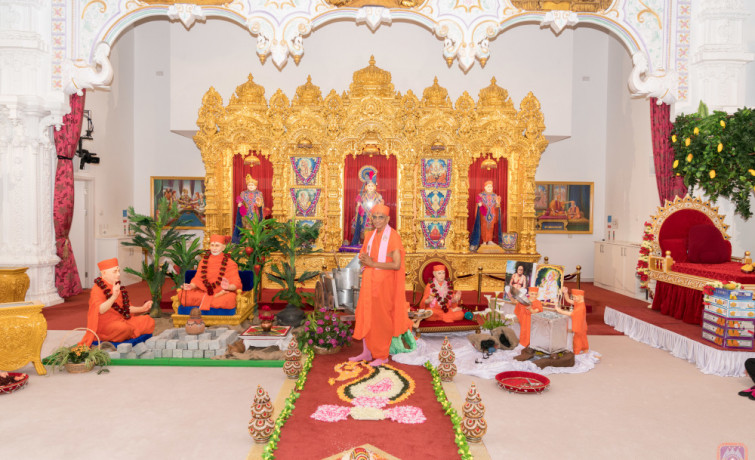 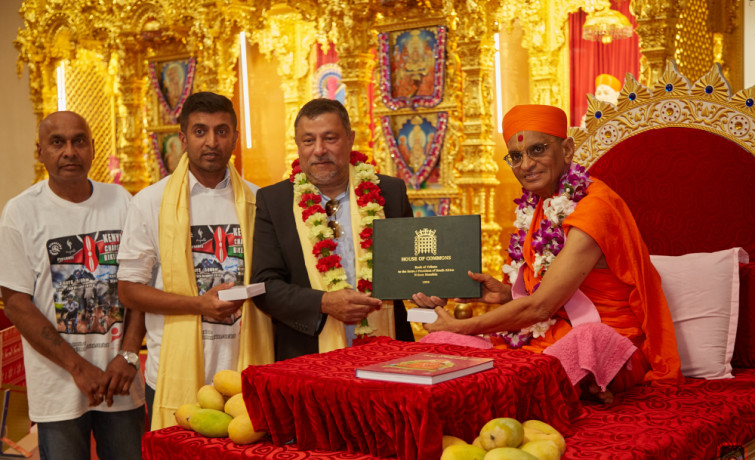 This was Acharya Swamishree Maharaj’s 30th visit to London since His investiture as Acharya of Shree Swaminarayan Gadi. His first visit was in 1982, which was also His first vicharan outside of India since He was bequeathed with the Gadi by Jeevanpran Swamibapa in 1979. The focus of His visit this year was to inspire His UK disciples to join the momentous celebrations taking place in 2019:

Upon His arrival into Mandir, Acharya Swamishree Maharaj soon performed Aarti to Lord Swaminarayanbapa Swamibapa, before He and sants took prasad thaar following their extensive journey.

The evening’s welcoming sabha commenced with Acharya Swamishree Maharaj performing Sandhya Aarti, followed by sants and disciples reciting the evening niyams and kirtans. The sponsors of today’s events, along with senior representatives of Shree Swaminarayan Mandirs around the world, performed poojan to Acharya Swamishree Maharaj on behalf of the entire congregation, and adorned Him with flower garlands.

Despite having just taken what would ordinarily be an exhausting journey, Acharya Swamishree Maharaj showed amazing benevolence towards His disciples by showering His divine Ashirwad on all, in light of the fact that He would not be able to do so again in London until His return from Bolton later this month. This again demonstrated that Acharya Swamishree Maharaj’s selflessness knows no bounds. In His Ashirwad, Acharya Swamishree Maharaj extended His personal invitation to the three festivals, and additionally announced that there would be an International Peace Festival hosted at Shree Muktajeevan Swamibapa Smruti Mandir in November this year – something, again, that everyone was invited to and implored to attend.

A special guest had requested to visit this evening to welcome Acharya Swamishree Maharaj to the UK. Nic Careem, founder of The House of Commons book of Tribute to the late Nelson Mandela, humbly requested that Acharya Swamishree Maharaj be the first spiritual leader to sign the book. Mr Careem visited the Mandir recently and was humbled and awestruck at learning just how many humanitarian and charitable caused Acharya Swamishree Maharaj inspired, and he was keen not to miss this opportunity. To date the book has nearly 700 handwritten messages from some of the most prominent people in the world, including President Barack Obama, Kofi Annan, three British Prime Ministers and hundreds of leading International Business and Community Leaders as well as sports, music and film stars. David Beckham, Sir Paul McCartney, Sir Richard Branson, Maya Angelou, Russell Crowe, Chris Rock, Kylie Minogue, Will Smith are amongst the host of stars who have written meaningful messages in the book. Poet Laureate Andrew Motion has also penned a special tribute poem which he wrote specially for the book.

The book will be edited by Janis Kearney, former White House Diarist to President Bill Clinton. Proceeds from auctions and sales will go towards fighting Child Poverty in that country. The book is a major tool to help continue Mr Nelson Mandela’s mission to end child poverty and racial intolerance.

Acharya Swamishree Maharaj’s entry into the book was the simple, humble but immensely powerful prayer:

Oh Lord, ignite the flame of divinity within us,
Remain the inspiration behind all that we do,
Bestow eternal divine peace and prosperity throughout the world,
Glory to the Lord, the eternal cause of all.

Addressing the audience, Mr Careem said, “Of the over 700 people who have contributed to this book, the most genuine person to have done so to date is Swamiji” – a truly incredible compliment given the range and standings of other contributors. He finished off by saying, “If Nelson Mandela was here today and I asked him which of the entries he felt was the most meaningful, I have no doubt he would say ‘Swamiji’s”. An amazing accolade, and perhaps highlights Acharya Swamishree Maharaj’s and Nelson Mandela’s most obvious common quality – Humility. 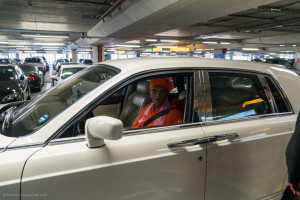 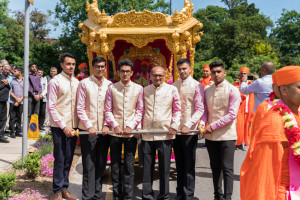 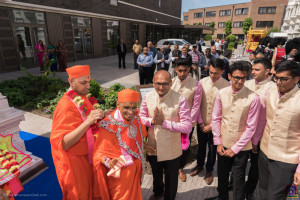 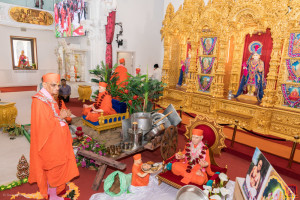 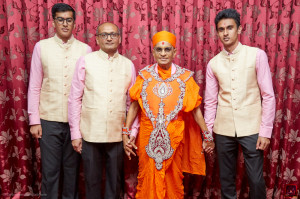 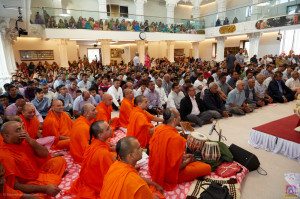