These annual events are regarded as the festivals of the spring season. Holi occurs on Falgun sud Poonam. Fuldolotsav is celebrated on the day after Holi. All over India, the days are celebrated by spraying coloured water and sprinkling powdered paint over one another. Holi is therefore sometimes referred to as the Festival of Colours. The colour is representative of the beautiful spring blossoms that would be emerging on the trees at this time of year. The Fuldolotsav festival is sometimes referred to as the Festival of Flowers. 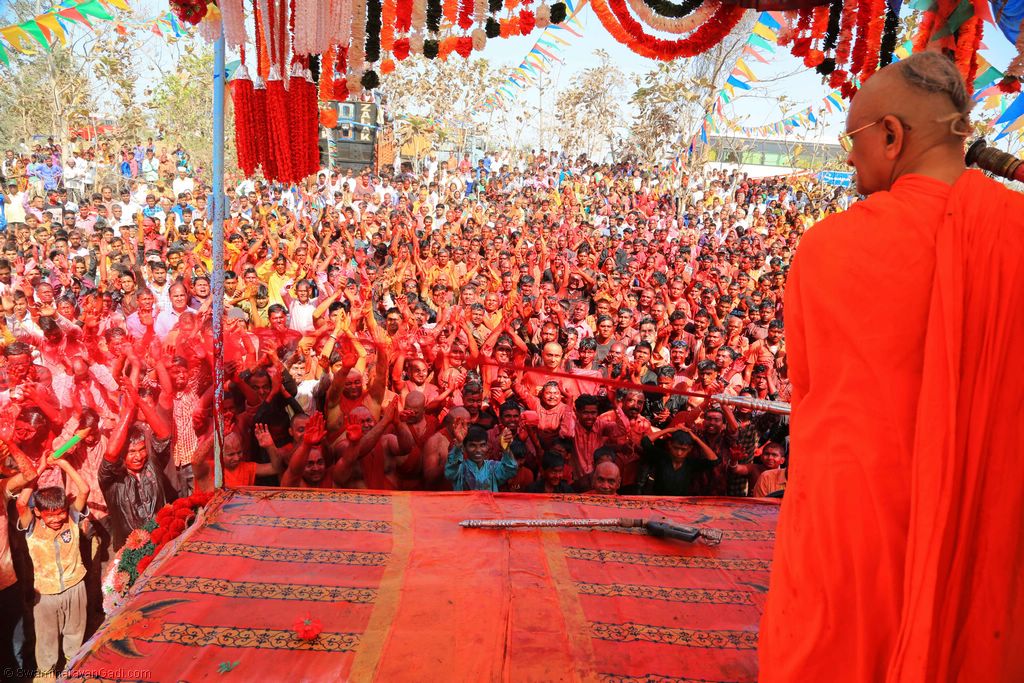 His Divine Holiness Acharya Swamishree showers all with different colours

Many mythological stories exist to explain the origins of the festivals. All have the same theme; destruction of evil and triumph of good. For disciples of the Swaminarayan religion, this evil also refers to our own internal evils that obstruct us from our devotion unto the Lord.

An ancient Scripture, the Bhavishyotara Puran narrates the story of the demon Dhundha Rakshas who used to cause distress to children. To discourage Dhundha from harassing them or their families, fires would be lit and everyone would chant the Lord's name whilst walking around the fires. This was thought to keep Dhundha away. This should be done on an annual basis, so it is said that the King of Satya Yug, King Raghu, decreed that it should be performed on Falgun sud Poonam. Even today, in some regions, leaves and twigs are swept together and huge bonfires are lit on the night of Holi.

Another story is that of Lord Vishnu's devout disciple Prahlad. His father Hirnaykashipu was a demon king who vowed to destroy Lord Vishnu. Unfortunately for him, his own son Prahlad was sincerely dedicated to Lord Vishnu. He made many attempts to harass his son so that Prahlad would abandon his devotion to Vishnu, but none were successful. On one occasion, Hirnaykashipu instructed his sister Holika to put on a magical sari that could not burn and then sit in a fire with Prahlad on her lap. By the Lord's wish, she wore the wrong sari and was burnt. However, Prahlad survived. This story symbolises how Maya (worldly, material elements) can be destroyed by sincere devotion unto the Lord. 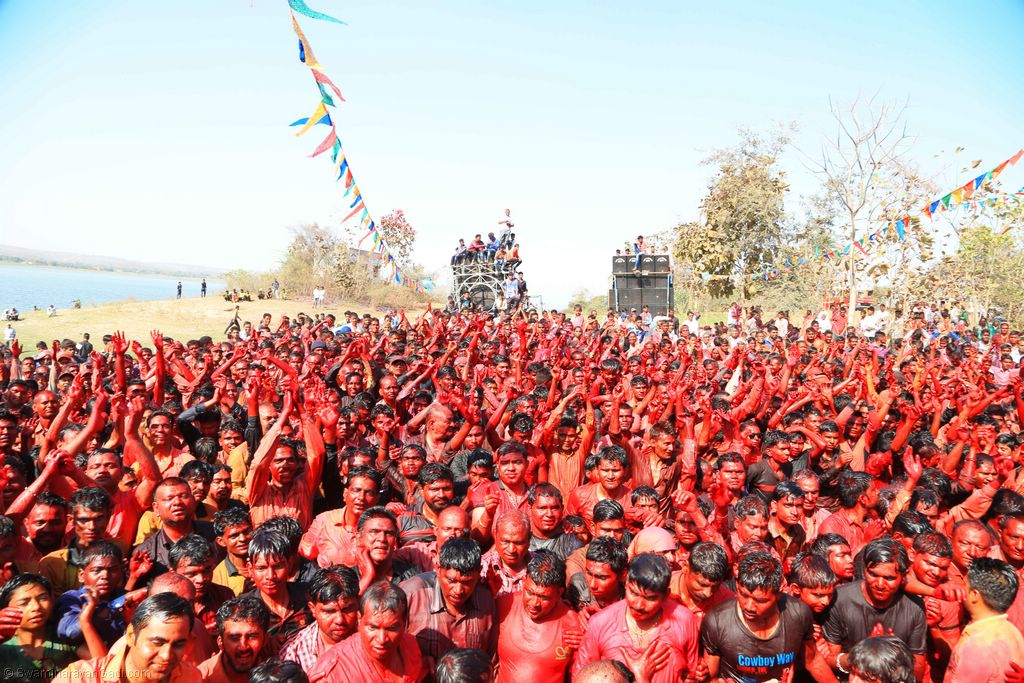 Nar-Naran Dev, an incarnation of Lord Vishnu is said to have manifested on the day of Holi.

Manu, the writer of the scripture the Manu Smriti was also born on he day of holi. The Manu Smriti is regarded as an instructional guide to one's human life.

On the day of holi, people burn effigies of Holika and roast grain in the fire whilst dancing and singing around the fire. People hurl colour over each other in the streets. On the day of Fuldolotsav, a swing is erected and decorated with flowers upon which the Lord is seated and swung with devotion by the disciples.

In the Swaminarayan religion, devotional raas is played around the divine murti of the Lord seated upon a hindoro. The murti of Lord Swaminarayan is bathed in panchamrut and then with coloured water and auspicious gulal powder. His Divine Holiness Acharya Swamishree then sprays this prasadi coloured water and powder over the Sants and disciples. This is symbolic of how we should replace our own worldly inclinations with the divinity of the Lord's colour.

Traditionally, the prasad distributed on this day is fagwaa; popcorn, roasted chickpeas, dates and sultanas. During the cold winter months, people would have eaten rich foods containing ghee etc. to keep them warm. All this causes phlegm to be produced in the body. By eating fagwaa, it is thought that the excess phlegm becomes absorbed and then eliminated from the body.