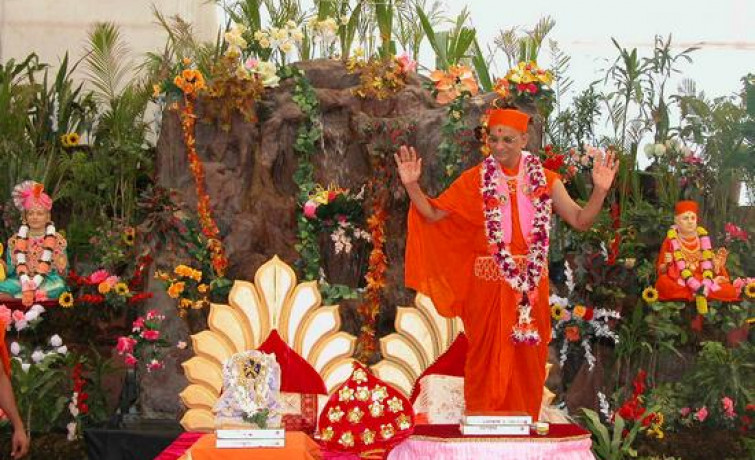 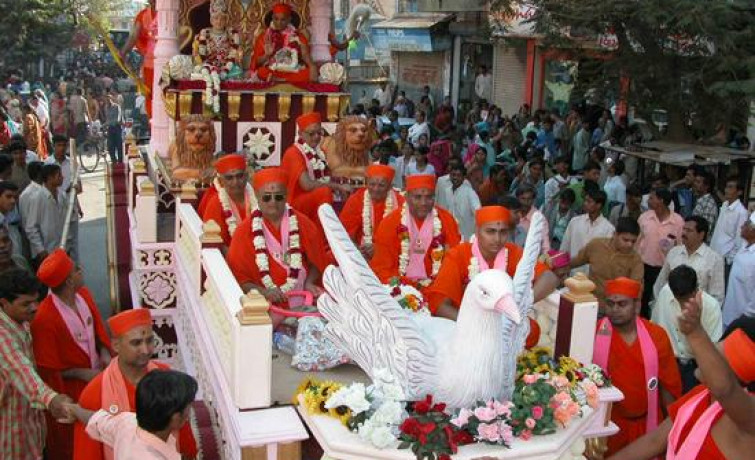 On this, the fourth day of the Rajat Pratishtha Mahotsav, His Divine Holiness Acharya Swamishree performed the mangla aarti to Lord SwaminarayanBapa Swamibapa.

As the Lord was to give darshan throughout Vadodara today, He had been adorned in regal red coloured velvet robes and He was wearing a red embroidered moogat upon His head. And to fulfil the desires of His children, He had adorned countless golden necklaces and other gold jewellery.

The concluding ceremony of the Vachanamrut scripture recital was held during the morning assembly. At 8 am, the disciples on whose behalf the recital had been held, brought chaabs of gifts for the Lord onto the stage. The chaabs had been lavishly decorated. These were placed before the Lord and Acharya Swamishree. The disciples then did poojan to the Lord, the Scripture, Acharya Swamishree and the narrating sants.

Acharya Swamishree then gave ashirwad and blessed the congregation.

9.30am Arrival of Guests

"Param Pujya Acharya Swamishree has made me sit on this paat but I am not worthy to sit on the same level as Him. My position should remain below Him. However, due to His requests, I am sitting here.

Acharya Swamishree is an extremely great leader and spiritual reformer. His eminence is boundless. He is the successor of Shree Muktajeevan Swamibapa. A deep affection existed between Shree Muktajeevan Swamibapa and Shree Yogiji Maharaj. Whenever they met, Shree Yogiji Maharaj used to say, "You are the fourth successor in the elite lineage from Shree Gopalanand Swami. So I am not worthy to sit alongside you."

From my sants, I have heard about the evening shows that were presented over the past few days. I was extremely pleased to hear about the total dedication and devotion of the sants and young disciples of this Sanstha, which they demonstrated through dance, music and drama. For them, there was no limit in their enthusiasm to please the Lord. Such devotion and spiritual ardour can only arise through one's learning from God and from great personalities such as Acharya Swamishree. Hearing about these events, I truly feel that I have missed out on being witness to true devotion to God."

These were the heartfelt emotional words of Shree Hariprasad Swamiji Maharaj.

His Divine Holiness Acharya Swamishree thanked Shree Hariprasad Swamiji for taking the time and bringing along his sant and haribhakta mandal. On behalf of Shree Swaminarayan Gadi Acharya Swamishree presented him with a prasadi shawl and distributed prasad to all his other sants.

A magnificent procession was held through the city of Vadodara. The primary purpose of the procession was to propagate further, Acharya Swamishree's sublime message for universal peace and religious tolerance.

The city and indeed the entire state of Gujarat have had to endure serious inter-racial tension over the past year. The aim of this Peace Yagna was to unite everyone so that such conflict is prevented from re-occurring.

During the Vishwa Shanti Yagna, many individuals and societies of all faiths, had come to the Temple to add their support to the cause. In turn, they then conveyed Acharya Swamishree's compassionate words to their own folk. By this time, the afternoon of 4th day of the Peace Yagna, the entire city of Vadodara had become aware of Acharya Swamishree's call for peace and unity.

As the procession progressed through the city, the people of many communities gathered at prominent positions to give their support to Acharya Swamishree and give Him their oath to maintain peace and unity.

At one particular area, the religious heads of the Muslim community had built a stage where they knew the procession would pass through. As the procession passed by, these Muslim people stopped the beautiful chariot that carried Acharya Swamishree and commended Him for this great act of unity and for His teachings of universal brotherhood. They all promised Acharya Swamishree that they would not allow religious tension to arise again.

The magnificent procession arrived back at the Temple on Shree Muktajeevan Swamibapa Road just before sunset. 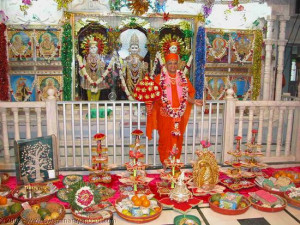 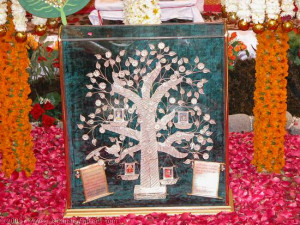 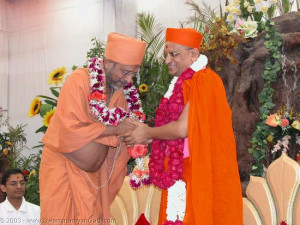 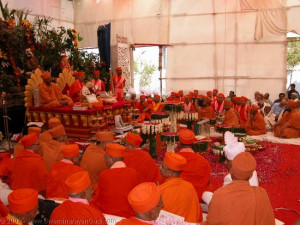 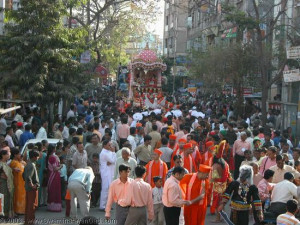 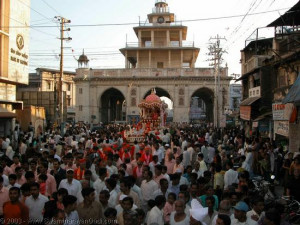