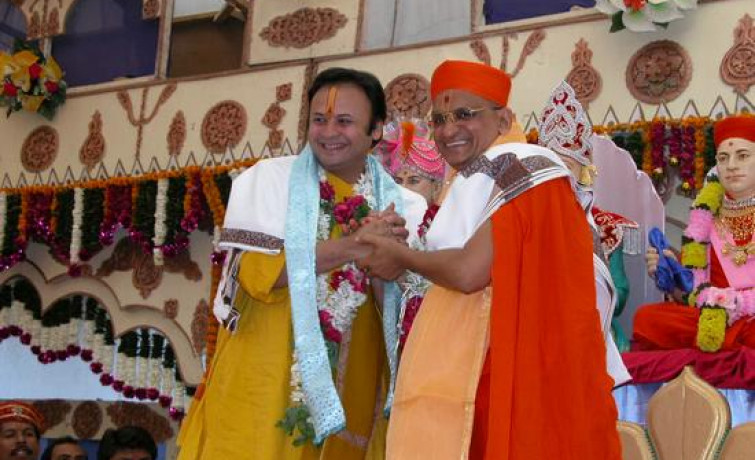 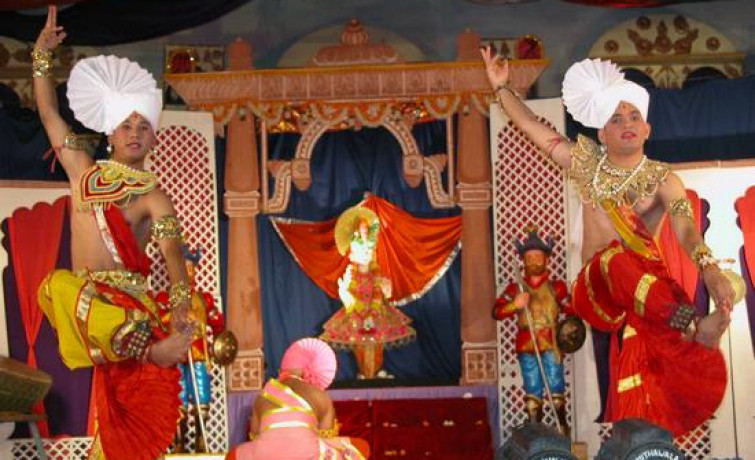 An extraordinary event was also held on Day 2 of the Mahotsav to further Acharya Swamishree's quest for World Peace.

The invited guests on this occasion were;

On behalf of the entire Vaishnav Sampradaya, the chief guest, Shree Dvarkeshlalji Maharaj presented a garland and shawl to Acharya Swamishree and honoured Acharya Swamishree's commendable work and tireless efforts for the betterment of humanity.

Sanskar Dipika Part 1 and the Nitya Niyamavali publications have had to be re-printed due to an overwhelming demand. Acharya Swamishree and the chief guests performed the inauguration of these books.

Comments of the Guests

Shree D D Tuteja
I commend His Holiness Acharya Swamishree for taking on this magnificent task of spreading the message of Universal Peace. Actually, it is the responsibility of people such as myself to maintain peace and law. By knowing that great Sants and Leaders such as Acharya Swamishree and all the Sants have the same aim, I have been given a renewed enthusiasm to continue my responsibility with an even greater fervour.

Shree Dwarkeshlalji Maharaj
The city of Vadodara has been truly blessed today by the presence of Acharya Swamishree. Acharya Swamishree has travelled the world to spread His message of peace and tolerance and has today come to Vadodara for this purpose. It is vital for the people to become His ardent followers and live according to His teachings for morality to be disseminated throughout society.

When God created this world, He made animals walk on 4 legs and humans walk on 2. It is said that humans are the elite in the biological hierarchy. However, in reality, one's position in this hierarchy is not dependent on one's species, but on one's moral conduct. People today are forgetting their responsibilities as humans and instead, they behave as animals. Acharya Swamishree is teaching society how to become true humans, i.e. live lives of morality and principles. He is telling everyone what God has intended for us all and He is building us into true humans, and leading us to spirituality. On behalf of all Vaishnavs, I commend Acharya Swamishree.

Acharya Swamishree showered His divine blessings on all present;

The recital of the supreme Vachanamrut Scripture was continued. The sants narrated these words of Lord Swaminarayan and also eloquently explained some of the complex philosophical issues as they arose in each Vachanamrut.

His Divine Holiness Acharya Swamishree then presented mementoes to the devotees of Vadodara who have relentlessly offered their services over the past 25 years for the progression of the Vadodara Temple and its social and charitable activities.

His Holiness Acharya Swamishree performed the sandhyaa aarti and the daily evening rituals.

Swamibapa's beloved sants and the young disciples of Vadodara presented a magnificent dance performance. For 2.5 hours non-stop, the dances continued. Each bhajan was merged into the next. As it was the silver jubilee of the Temple, 25 bhajans had been incorporated into this colossal dance rendition. The show was named "Madhur Smaran Ghanshyam Prabhu naa". Through each bhajan, a different event in the day of Shree Ghanshyam Maharaj was narrated and in this way, a complete day was described. The first dance described the manglaa aarti. Then God's awakening, bathing, adorning beautiful regal robes, the shanghar aarti, dining, His afternoon siesta, awakening at 4 pm and eating some freshly prepared fruits, the sandhya aarti, when all the deities come for the darshan of Shree Ghanshyam Maharaj, the evening discourses, and finally, God removing His robes and resting for the night, was all described through the dances.

At the end of this epic performance, 25 young Vadodara devotees performed a raas dance to the bhajan "Shakhi jone shobhaa Ghanshyam ni".

The Chief Collector of Vadodara Shree Bhagyeshbhai Za had come to witness this splendid devotional dance performance. He has a deep interest in dance and music and was extremely appreciative of being given the opportunity of experiencing such a wonderful show. Shree Bhagyeshbhai Za was previously a student of our own Swaminarayan College and has a deep affection for our Sanstha. In his speech he said, "I have reached this position as Chief Collector because of the blessings of Jeevanpran Swamibapa. Whatever I am today, is due to Him and His divine mercy. One further splendid and greatly worthy deed that I have witnessed is the Vishwa Shanti Yagna instigated by Acharya Swamishree. No one in the world has done so much for peace as Acharya Swamishree has done. Others say that they want peace, but in reality, they are hungry for conflict."

On behalf of Shree Swaminarayan Gadi Sansthan, His Divine Holiness Acharya Swamishree presented a prasanta paag and memento to Shree Bhagyeshbhai Za. The other main guests present to witness this dance performance were the sadhus from the Haridham Sokhda Sanstha.

One of the highlights of the dance performance was when a very young devotee sang a bhajan, the words of which were, "Bapa ne makhan bhaave re, Bapa ne misri bhaave re," (Bapa likes butter, Bapa likes sugar). When this kirtan was sung, Acharya Swamishree ran onto the stage and grabbed the plate of makhan sukhdri that was beside Shree Ghanshyam Maharaj and fed it to the Lord. All the sants took the opportunity to offer the makhan sukhdi to our beloved Acharya Swamishree. In return, Acharya Swamishree gave the makhan sukhdi prasad to each sant and made the evening's event an unforgettable moment in everyone's lives. 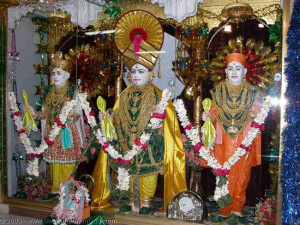 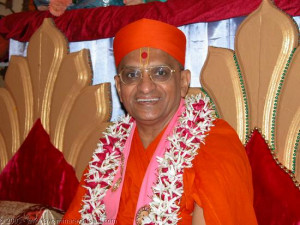 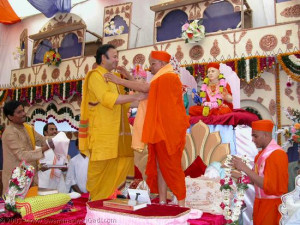 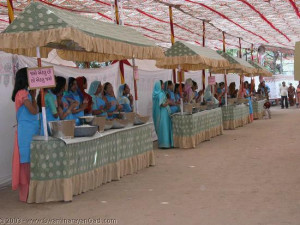 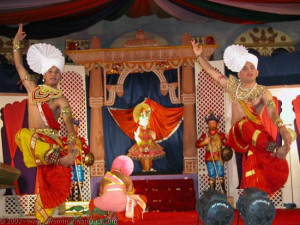 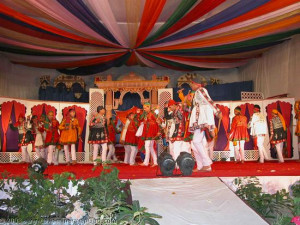