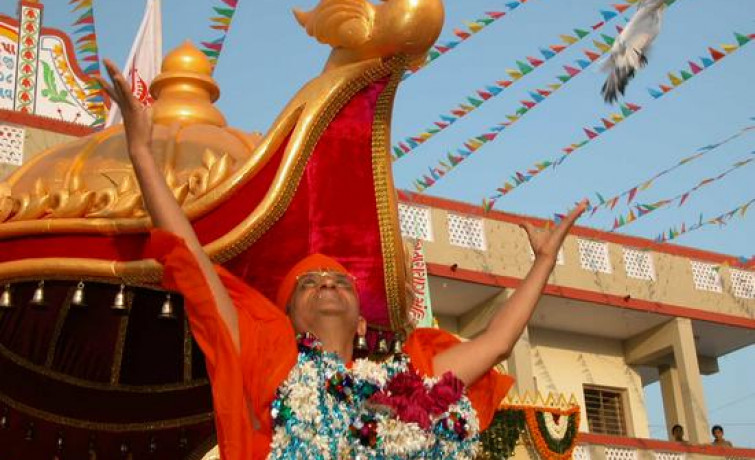 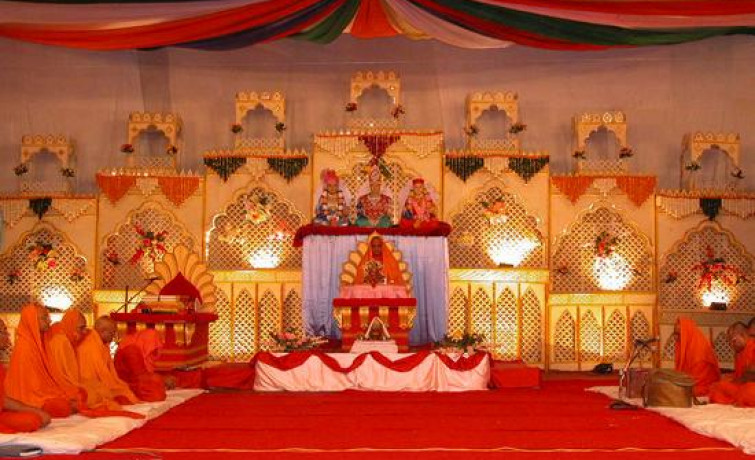 The time around the months of Magshar and Posh are generally the coldest time of the year in Gujarat. However, the merciful Lord Swaminarayan had made the weather much more pleasant for all the devotees who had come to be part of the Vadodara Rajat Jayanti Mahotsav.

His Divine Holiness Acharya Swamishree performed the mangla aarti to Lord SwaminarayanBapa Swamibapa. Shree Ghanshyam Mahaprabhu was adorned in a Rajwadi paag. As it was amaas today, Shree Ghanshyam Maharaj was holding a silver rifle, symbolising how the Lord defeats the internal enemies of lust, anger avarice etc. that may exist in His disciples.

The sants and disciples performed continuous chanting of the Swaminarayan Mahamantra after which they all sat in meditation for 30 minutes. During the meditation, Jeevanpran Swamibapa explained the method of performing meditation and ensured that everyone kept a remembrance of the divine murti of the Lord.

Vachanamrut recital commenced by performing poojan to the scripture. Acharya Swamishree was then led from the Temple into the Sabha Mandap to the accompaniment singing and dancing devotees.

9.15am His Holiness Acharya Swamishree blessed all the disciples with His divine Ashirwad

Taking into account the strict segregation between sants and females, the Mayor, Shreemati Bhartiben was given a special seat at the front of the ladies sabha area. On behalf of Shree Swaminarayan Gadi Sansthan, Acharya Swamishree blessed all the invited guests with a prasanta paag. The trustees of the Mandir presented a prasanta shawl to the Mayor. The guests and Acharya Swamishree then lit a flame to symbolise eternal peace and prosperity.

In order to confer peace to the souls that perished in the Columbia Shuttle tragedy on 1st of February 2003, Acharya Swamishree and the congregation held special prayers, meditation and also held a 2 minute silence.

To provide further help to the victims of the Gujarat Earthquake in 2001, a generous charity cheque was presented on behalf of Shree Swaminarayan Gadi Sansthan by Acharya Swamishree.

Comments of the Guests

On this occasion, the guests presented expressed their delight.

Shreemati Bhartiben Vyas, Mayor of Vadodara
It is a great honour and privilege for me to be invited to such an eminent occasion whilst I am serving the city of Vadodara as Mayor. I am delighted that a great divine personality such as Acharya Swamishree has held this magnificent event in this city. I pray to Acharya Swamishree that He gives me the strength to continue to serve this city.

Shree R B Dave
I am delighted to have the darshan of Acharya Swamishree and all the sants. Wherever I can be of use to the Temple please consider me to be your own disciple and give me the opportunity to serve you.

Shree R B Shukla
Only those, whose thoughts, words and actions are synonymous, can be considered to be true sants. Today, I have been able to have the darshan of such a True Sant. Only through the association of such sants can one transgress the ocean of life and death and attain spirituality.

Shree Ghanibhai Kureshi
Fear has been spread in the minds of all the people of Gujarat and indeed the entire world. On this occasion, I pray to Acharya Swamishree that the minds of all are alleviated from this fear and instead courage and morality is disseminated.

Shree Homibhai Dasturji
On this auspicious occasion, the sants of Shree Swaminarayan Gadi Sansthan have honoured our Parsi Community. We are extremely delighted to have received such divine blessings from Acharya Swamishree. I commend Acharya Swamishree for his efforts for universal peace and pray to Him, that His exemplary efforts are continued. He has the full help and cooperation of our entire Parsi community.

Vadodara's famous music Rushabh Music Group presented an evening of devotional bhajans. They had a wish to be included as part of the Rajat Pratishtha festivities and had made a special request to Acharya Swamishree to give them the opportunity to please the Lord.

The evening show commenced at 7.30pm with a prayer to Lord SwaminarayanBapa Swamibapa and Acharya Swamishree to bestow peace upon the city of Vadodara.

The singers, musicians and the young children of the Rushabh Group presented their God-given talent to please the Lord.

Whilst this Bhakti Sangeet concert was being performed, another talented singer from Vadodara came for the darshan of Acharya Swamishree. He was Shree Ranjitsingh Gayakvaad, a descendent of King Sayajirav. He had heard about the Rajat Pratishtha Mahotsav that Acharya Swamishree was holding in Vadodara and he wanted to be part of the Mahotsav and present his acquired talent to please the Lord.

Acharya Swamishree gave Shree Ranjitsingh the opportunity, and he sang three bhajans written by our Nand Padvi Sants. These were;

His Divine Holiness Acharya Swamishree became pleased with his devotion and presented him with a prasadi paag.

Acharya Swamishree was especially pleased with a bhajan sang by one of the very young singers from the Rushabh group and presented this young artist with a memento of this Mahotsav.

The evening's events concluded at 10.30pm after which Acharya Swamishree gave prasad to all the artists who had taken part in this Bhakti Sangeet Night and who had made it a huge success. 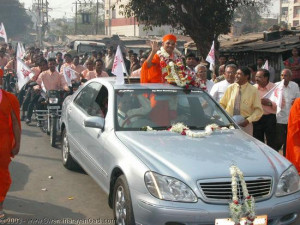 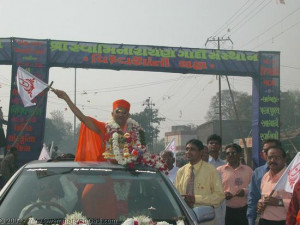 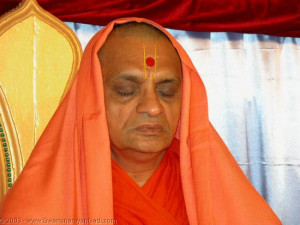 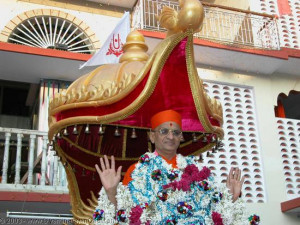 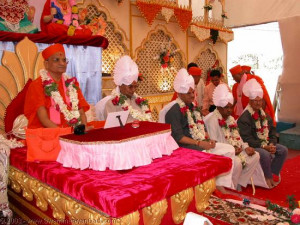 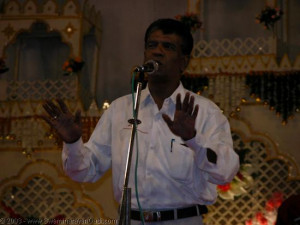