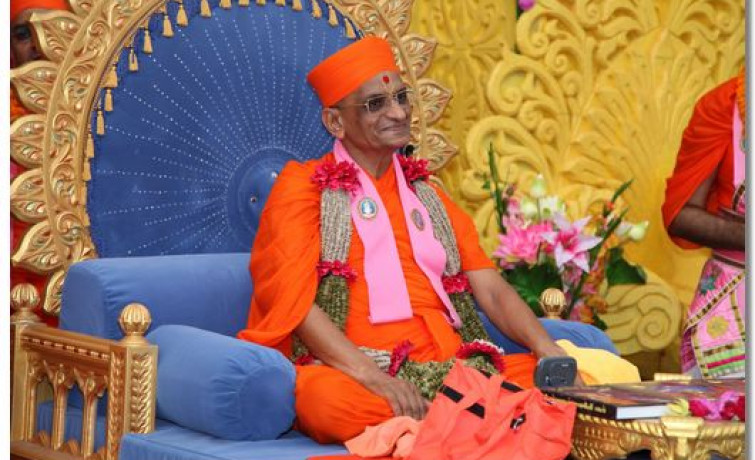 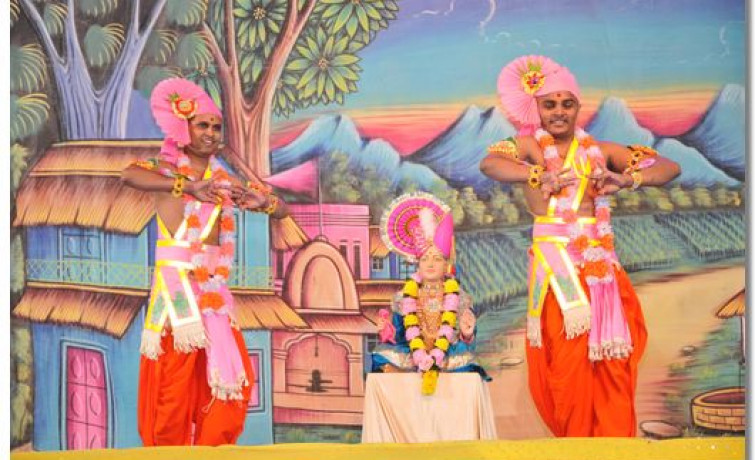 Day 2 of the Golden Jubilee Festival of Bhuj Mandir commenced at 7.00 am with scripture recitals.

Day 2 of the Golden Jubilee Festival of Bhuj Mandir commenced at 7.00 am with scripture recitals.

At 8.00 am, Sants, disciples and the three bands of Shree Swaminarayan Gadi Sansthan welcomed Acharya Swamishree into the grand entrance of the assembly marquee along with the disciples on whose behalf scripture recitals had been held. Acharya Swamishree Maharaj granted his divine darshan dressed in a beautiful, embroidered robes. As the conclusion to the scripture recitals, offered gifts at the lotus feet of Lord Swaminarayanbapa Swamibapa, and performed poojan.

Swamibapa’s loving disciples have an uncontrollable urge to please him in any manner that they can. At present, there is an ever-growing list of people wanting to have scripture recitals performed on their behalf. Disciples have faith that by performing such devotion here, at Shree Swaminarayan Gadi, their names are being entered into the diary of the supreme, Purna Purushottam Lord Shree Swaminarayan.

Yesterday evening, we saw young and older disciples performing devotional dances. Just as a young child frolics in front of his parents to make him happy, these disciples were demonstrating their love for the Lord through their dances. And seeing His children with such sincere yearnings to please Him, the Lord Himself was dancing with each of His children.

Sants and disciples have been preparing for this festival in numerous different ways for many months. In particular, the splendid exhibition that has been created is the result of the sheer hard work and dedication of our Sants. In addition, they have designed and built this beautiful stage for the Lord to preside upon, and during the procession, we will see the grand floats that they have crafted. This cannot be completed without having the enthusiasm for pleasing our beloved Lord Swaminarayanbapa Swamibapa; and actually, it is our merciful Lord who is giving the Sants, the acumen, skill and perseverance to complete their tasks.

Shree Bhaktirasamrut is a collation of Gurudev Swamibapa’s narratives explaining the greatness of true devotion. In summary, having true devotion is the path of becoming one with God. This scripture contains the manner of following that sacred pathway to eternal salvation. The fruit of all spiritual endeavours is to forge a life filled with devotion. The Lord Himself assists His disciples to further perform such faithful devotion.

When performing devotion, you must use the strength of God’s mercy to assist you. That does not mean that you stop performing your strenuous deeds to please God, and wait for God’s mercy, and say, ‘when God showers His grace, I will perform those deeds to perform devotion’. That is a wrongful and defeatist attitude. You must continue performing those deeds with faith and dedication but never allow any manner of arrogance to develop about them. And the best way to melt away any egotistical sentiments in your mind is to perform devotion.

In the Bhaktinidhi scripture, Sadguru Shree Nishkulanand Swami explains that without devotion, having the virtues of truth, austerities, dispassion, spiritual merits etc. are filled with obstacles and fearful difficulties. In contrast he states, if you have devotion to God and also have these virtues, your path is free of all hindrances. Swami explains further, “A person who has devotion never does anything that his mind yearns for, but instead, conducts himself always in accordance with the will of God. A person who has a simple, uncomplicated nature, is able to perform selfless devotion to God.

That is the kind of disciple that Swamibapa likes. For that reason, in His discourses, Swamibapa taught the manner of living such an ideal life, and those are the superlative teachings collated in this new scripture, Shree Bhaktirasamrut.

In order to perform devotion, the most sacred and valuable aid is this human birth. Do not waste that opportunity to please the Lord. Today, in the divine presence of Lord Swaminarayanbapa Swamibapa, at the shelter of Shree Swaminarayan Gadi, we have the opportunity to perform devotion and become merged into His Murti. May we never be lured by anything other than Him.

Guests and representatives from various charities were present and were welcomed by Shree Muktajeevan Pipe band London.

On behalf of Maninagar Shree Swaminarayan Gadi Sansthan, various charitable donations were given by Acharya Swamishree Maharaj. Bhuj Nagar Palika was donated a large sum to purchase a city bus and Subhaso Jain Mandal who run a hospital for sick animals was also given a large donation.

Our cherished God, Lord Shree Swaminarayan manifested upon this Earth for the salvation of innumerable souls. He did not consider whether the person was of high or low stature in society, whether he was rich or poor, or if was a Hindu or of another Faith. Anyone who devotedly called out to Him became worthy of His mercy. Not just humans, but even animals and vegetation were blessed by His touch and thereby, became worthy of attaining salvation.

We have the great opportunity to experience the proximity of that very same God, through our closeness with Gurudev Swamibapa. Lord Shree Swaminarayan and Swamibapa had the same purpose for their manifestations upon the Earth as human forms, and that is, for the benefit and progression of society towards the true ideals. They endured much hardship and suffering themselves, but because of that, we were given the support to progress and flourish our lives. By spreading the principles of unity and compassion, they attracted countless people and led them onto the sacred path of God. Such was His extraordinary loving personality, charisma and attraction. Just as a surgeon removes a gangrenous part of a person’s body in order to save his life, Lord Shree Swaminarayan removed the rot that had crept into the Hindu faith by selfish, egotistical ascetics, and instead, established the pure, sacred, eternal, Sanatan Dharma – the Swaminarayan Faith.

His charisma and charm was exceptional. Today, we see people trying to portray their own personality through the kinds of clothing they wear, the facial ex

Swamibapa says, “We have no concern for such superficial persons because we are concerned about what is truly within a person’s heart. We want to fill the person with good qualities, morals and love. We want the person to be overflowing with true dedication, devotion and sincere spirituality.”

Such an epitome of true love is supreme Lord Shree Swaminarayan and His divine lineage of ascetic spiritual descendents. They considered everyone with equal respect, even though he may have been averse individual or sinful. They have led us onto that honourable path.

A major reason for the destruction of a human is his addictions to wrongful practices and vices. If you look at the history of the Swaminarayan Faith, you will see that the Lord and His Sants have strived hard to make people see the distress and hardship associated with addictions and thereby free them from such obsessions. Due to Lord Shree Swaminarayan’s ‘love personality’, countless people were freed from compulsions and their lives were reformed as a consequence.

May we pray to the Lord, “Oh Bapa! May we forever remain bathing in the ocean of You love and mercy. May all our flaws be eliminated. And may we spend the entirety of our lives at the shelter of Shree Swaminarayan Gadi, pleasing You more and more. Grant us the divine strength, devotion and wisdom to remain forever according to the ideals that You have taught.”

This evening’s programme consisted of a musical drama production called Sadguru Praud Pratap, which was held at Shree Kutchi Leva Patel Samajwad i- RD Varsani Ground. The evening commenced with a welcome garland presented to Acharya Swamishree Maharaj by the principal sponsors of the festival. A number of eminent guests who were also present on this occasion, including Dr Sachin Yadav from Kutch University, Dr Mahadev Patel and Dr Yogesh Velani. They also offered garlands to Acharya Swamishree Maharaj. Sants also performed a devotional dance to the kirtan ‘Preme Naman Che He Vrushnandan.’

Following the prathna dance, the musical drama production then commenced. A true story describing the glory of Sadguru Shree Gopalanand Swamibapa was told through dance and music. The eminent scholar’s mind became corrupted when he lost his only son and wife. He became a demon ‘Brahm-rakshas’ and tormented hundreds of souls. During his tours, Shree Gopalanand Swamibapa came to his village and granted salvation to him and all his servant ghosts. 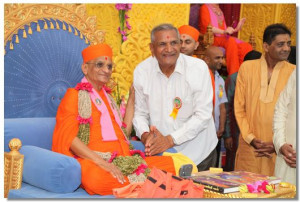 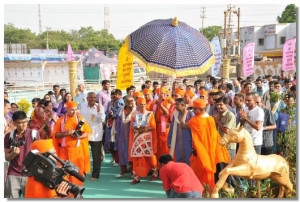 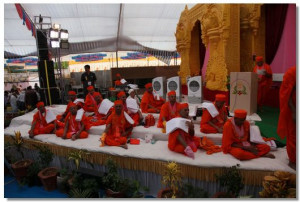 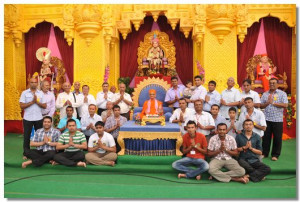 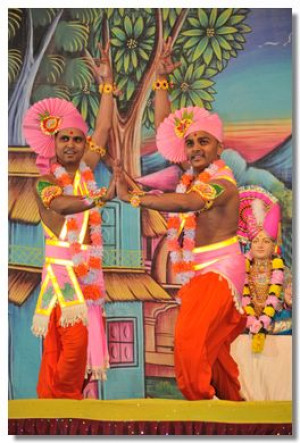 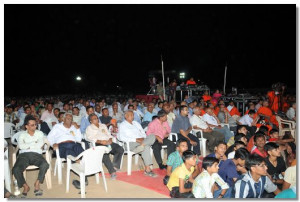