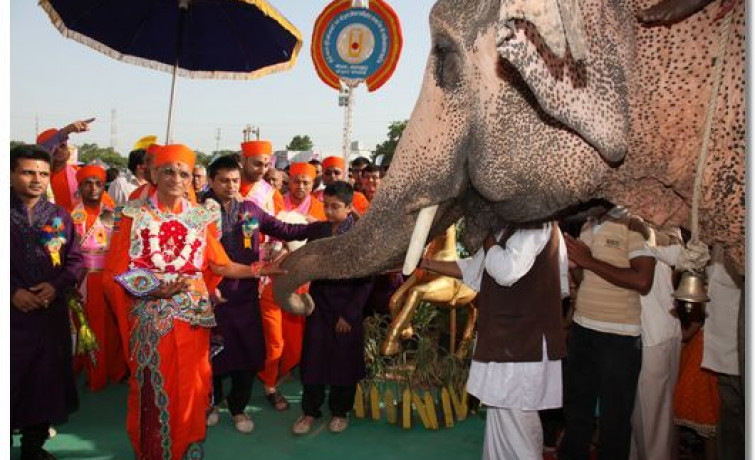 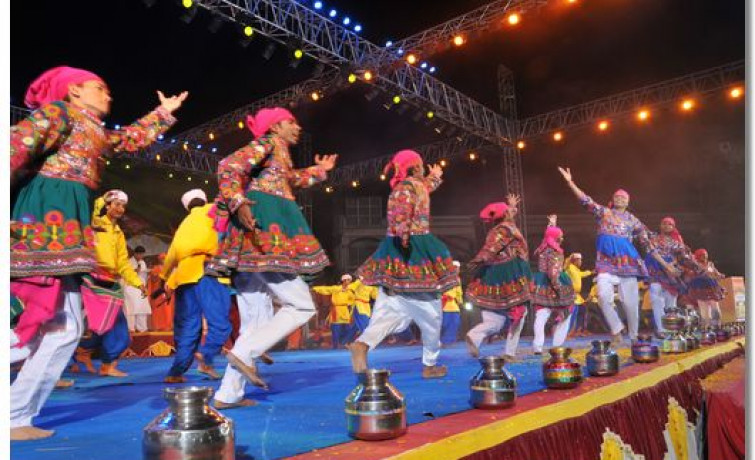 The fourth day of Bhuj Suvarna Pratishta Mahotsav commenced with scripture recitals conducted by Sadguru Shastri Shree Jitendriyapriyadasji Swami. Acharya Swamishree Maharaj soon arrived and He was duly saluted by the combined Pipe Bands of Shree Swaminarayan Gadi Sansthan. The Band then led the Swagat Yatra onto the stage of the Sabha Mandap.

Acharya Swamishree Maharaj soon arrived and He was duly saluted by the combined Pipe Bands of Shree Swaminarayan Gadi Sansthan. The Band then led the Swagat Yatra onto the stage of the Sabha Mandap.

His Divine Holiness Acharya Swamishree Maharaj then bestowed divine blessings to all and explained:

Accepting the loving prayers of Gurudev Jeevanpran Swamibapa, the almighty Purna Purushottam Lord Shree Swaminarayan came to preside in the grand Mandir that stands in the heart of Bhuj. That monumental event took place exactly 50 years ago, and we are celebrating that occasion with great joy and jubilation.

Shree Nirgundasji Swami fearlessly spoke about the true supremacy of Lord Shree Swaminarayan. His teachings were conveyed in a simple, lucid manner, which could be understood by everyone. His greatness has been described in our Naad-vansh-ashtak:

Swami Nirgun Bapa, staunchly imparted the essential guidance. Acharyas and sants of the nand status instilled his teachings into their hearts and achieved fulfilment in their devotion. ‘Bapa is the essential spirit and life of all, who grants the Murti [to souls]; He who gave such great guidance – I bow down repeatedly at your lotus feet.

From Nirgun Bapa’s discourses, we can see the qualities that a person needs to imbibe into his soul in order to please the Lord. Such a person needs a selfless attitude, a simple and logical mind, and a single-minded aim for performing devotion towards the Lord. Such an individual earns the true rewards of a human life, which is to meet the supreme Lord Swaminarayan and His eminent Satpurushs.

Such a soul who was fortunate to meet the Lord was the Imam of Bhuj. Once, Lord Shree Swaminarayan had come to Bhuj. With the accompaniment of traditional music and devotional songs, a disciple led the Lord and Sants to his home. They passed a Mosque. The Imam in the Mosque heard the words of the devotional prayer, and immediately started to experience a kind of peace like he had never felt before. He looked outside and saw the Lord and His procession. The beauty of the Lord's eyes stuck into his mind, and he fell into a trance. During the trance, the Imam witnessed the divine darshan of the supreme Lord. When he awoke from the trance, he made a solemn vow to go for the Lord's darshan.

At that time, Lord Swaminarayan used to awaken at 3.00 am, and go to bathe in the Hamisar Lake. To go there, He would have to pass the Pragmahal (royal palace of Bhuj), and as you all know, that palace is right outside our Mandir. Consequently, the Lord’s daily routine was to pass through Darbar Gadh Chowk, which is the sacred location of our Mandir.

The Lord would wear wooden sandals on His feet, and the sound of the sandals could be heard as He took each step. Each day, the Imam would wait for the sound of the Lord's footsteps, and look outside his window when he could hear the Lord approaching his home. In that manner, he was fortunate to enjoy the Lord's darshan every morning.

He decided to have a special pair of sandals made for the Lord, which would be covered in silver adornments. When it was ready, he presented it to the Lord. Tears of love flowed from his eyes, as he placed the sandals on the Lord's lotus feet. The Lord lifted him up and embraced him. The Lord said, "I have become pleased by your devotion. Ask for whatever you wish, and I will grant it." The Imam replied, "All I want is that at the end of my life, you grant me entry into Your Akshardham." The Lord granted that promise. At the end of his life, Lord Shree Swaminarayan gave darshan to him wearing those sandals and took him to Akshardham.

Just like the Imam met the Lord, we too are fortunate that we have met Gurudev Swamibapa, through whom Lord Shree Swaminarayan and Bapashree gave darshan and granted their blessings. Till our last breath, may we remain conscious of the great fortune that we have attained, and may we remain at the lotus feet of that merciful Lord for all eternity.6

The afternoon sabha started with the scripture recital by eminent Sadguru Sants.
On this auspicious occasion, a number of Industrialists came for Acharya Swamishree Maharaj’s darshan and divine blessings. On behalf of the Organisation, each guest was given appropriate commendation and accolade.

This was followed by Acharya Swamishree Maharaj’s divine ashirwad:

At the divine home of Lord Swaminarayanbapa Swamibapa, a splendid convention of the region’s elite businessmen and technologists has been held today. They have gathered for the Lord’s darshan and blessings. This demonstrates that despite their own intelligence, they recognise that they are excelling in their own vocations due to the mercy and blessings of the supreme Lord.

Their hard work is essential for the progression of a Nation. When we look back in history, we can see that those who have strived hard for progression are those who have actually excelled. Those who remain idle do not prosper. Some believe that it is in their fate whether they are successful or not. That is a defeatist attitude. If a lion spends the entire day sleeping under the shade of a tree with its mouth wide open, its prey will never fall into its mouth. There is an English phrase that describes this very fact, ‘a man is the architect of his own fortune’. An industrious person remains self-reliant because he knows that placing too much emphasis on the work of others can lead to dangerous consequences.

We can look back at the conduct of our great historical figures and learn how to work hard. Sheer hard work and endurance can be seen in the biographies of Ramkrishna Paramhans, Maharshi Dayanand, Swami Vivekanand, Swami Ramtirth, Lokmanya Tirth, Mahatma Gandhi and many more eminent personalities.

Lord Shree Swaminarayan too spent much time and effort in improving society in numerous different ways. Night and day, He continued His tour of the regions for the spread of morality. The eminent Sant of this Kutch region, Jeevanpran Shree Abji Bapashree, gave encouragement to all those who came to him, so that they progressed and prospered. It was due to his encouragement that disciples first started travelling abroad for work; and as a consequence, this entire Kutch region has progressed. Shree Muktajeevan Swamibapa performed numerous deeds to improve the education of the people and encouraged them to allow their children to study more and more. He knew that this is the way to uplift an entire region.

To all the industrialists here, I wish to say that you must have faith and courage in all that you do. Keep the Lord foremost in your minds in whatever you do. And then, the Lord will remain assisting you.

In the Shikshapatri verse 67, Lord Shree Swaminarayan commands that those who employ servants must ensure that their basic sustenance (food, clothing etc.) is provided adequately. This means that you must look after your employees but not take advantage of them. Remember that without them, your businesses would not be able to run. Value them, and they will respect you.

On this occasion, may we pray to the immensely merciful Lord that we all follow the ideals advocated by Him, and we join together for the continuous progression of our Nation. We must never become selfish and wish for our own individual advancement. We must maintain a spirit of altruism and help our fellow brothers and sisters. May the supreme Lord Swaminarayanbapa Swamibapa assist us in all our deeds.

The evening performances were to be held in the vast grounds of the RD Varsani Kutchi Samaj.

Acharya Swamishree Maharaj arrived at 8.30pm, and was applauded by the entire audience as He took His seat at the front of the stage.

The first performance was an African-themed dance by disciples from Africa and India.

Devotional songs, many especially written and composed for this event, were performed by the famous singers Feroz and Ansh, and Sadguru Shree Munibhushandasji Swami and Sant Shiromani Shree Uttamsharandasji Swami. The evening consisted of five different styles of devotional songs, including Arabian, folk, instrumental and Indian film songs.

This was the first time that 100 dhol players, which included 10 talented Sants, dhol players from Kenya, UK and India, performed together in unison! The dhol players were led by Sant Shiromani Shree Vivekbhushandasji Swami, who choreographed the entire event. Young dance students also performed to the live music.

The evening’s music was composed by Shree Kirtibhai Varsani, and directed and choreographed by Shree Saurabh Rajyaguru. 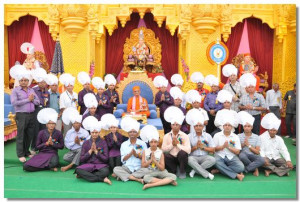 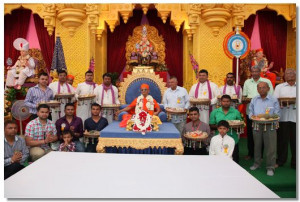 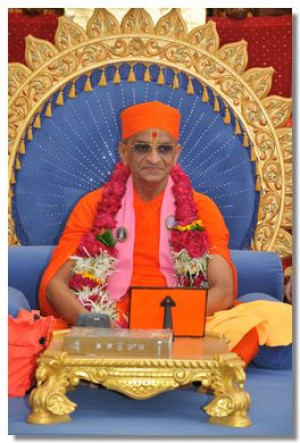 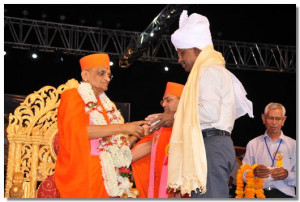 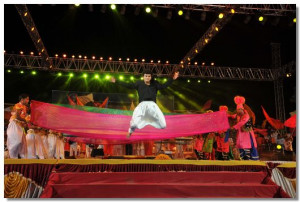 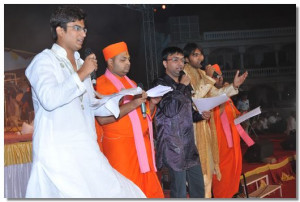