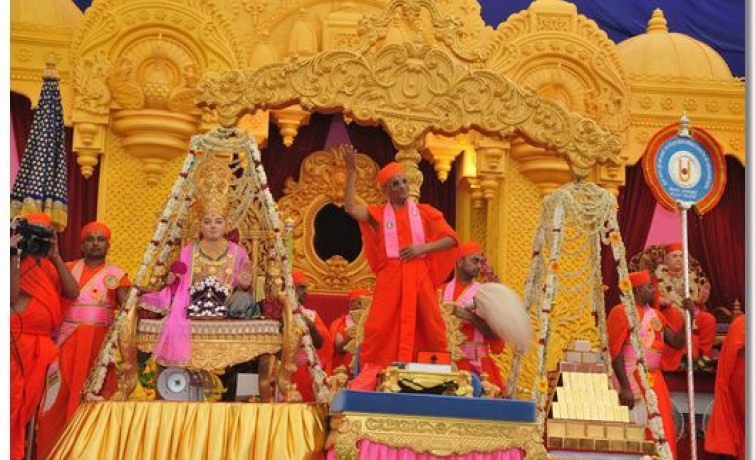 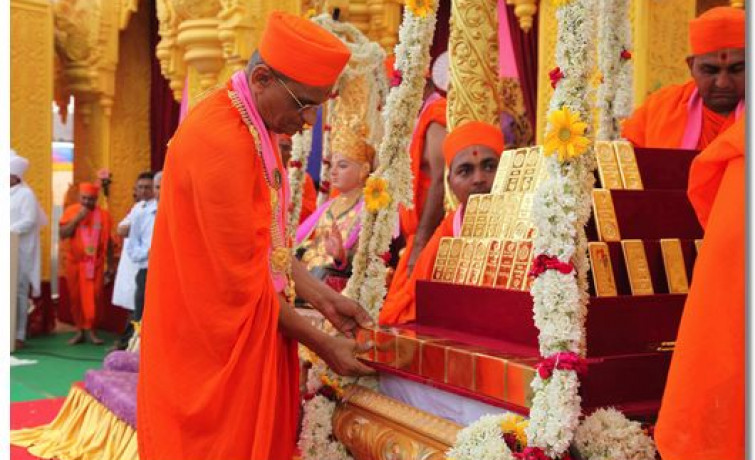 The seventh and final day of the Shree Ghanshyam Maharaj Suvarna Mahotsav commenced at 8am. Acharya Swamishree Maharaj arrived at Bhuj Town Hall where thousands had gathered. A swagat procession, led by the three Pipe Bands of Shree Swaminarayan Gadi Sansthan escorted Acharya Swamishree Maharaj?s golden chariot to the Sabha Mandap nearby. Around 400 disciples from all over India and the world, who formed the Swagat, offered gifts of adoration to Lord Shree Swaminarayanbapa Swamibapa.

The seventh and final day of the Shree Ghanshyam Maharaj Suvarna Mahotsav commenced at 8am. Acharya Swamishree Maharaj arrived at Bhuj Town Hall where thousands had gathered. A swagat procession, led by the three Pipe Bands of Shree Swaminarayan Gadi Sansthan escorted Acharya Swamishree Maharaj’s golden chariot to the Sabha Mandap nearby. Around 400 disciples from all over India and the world, who formed the Swagat, offered gifts of adoration to Lord Shree Swaminarayanbapa Swamibapa.

A number of guests who were welcomed by H H Swamibapa pipe band Nairobi were also present on this occasion including Shree Purshottam Rupala (Bhartiya Janta Party leader).

The much awaited pinnacle of the Mahotsav had now arrived – the Survana Tula of Shree Ghanshyam Maharaj during which our Lord was ceremonially weighed against pure gold bullions. During the auspicious ceremony, the Lord was first weighed against coconuts, sakar (lump sugar), silver and then finally against gold.

The Sants, who had all worked so tirelessly and selflessly to stage this magnificent Mahotsav, had the first opportunity to offer Aarti to Lord Shree Swaminarayanbapa Swamibapa and Acharya Swamishree. Disciples from the congregation followed and also took the opportunity to perform Aarti. 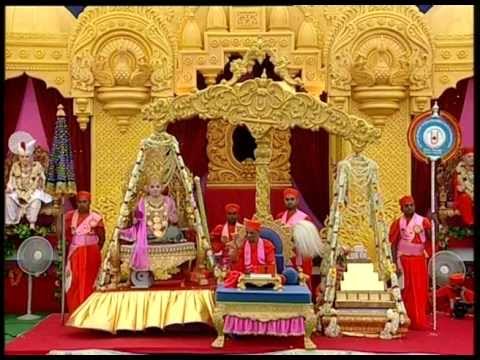 Acharya Swamishree then bestowed his Ashirwad to all and explained:

For such a long time, we had been awaiting the time to celebrate the golden jubilee. That glorious opportunity to please the Lord and experience His unsurpassed divine bliss came. For the duration of the festival, everyone gathered here from all around the world witnessed the immense joy of remaining close to the almighty Lord Swaminarayanbapa Swamibapa. Like a bolt of lightning, the 7 days of the festival have elapsed and today is the final day.

During the procession, Lord Swaminarayanbapa Swamibapa presided on regal elephants and gave darshan throughout Bhuj. Accepting the prayers of Sants and disciples, the Lord also presided on numerous ornately crafted chariots, and blessed all the onlookers. The thousands of people who witnessed this spectacular procession became worthy of eternal salvation. This procession reminded everyone of the great occasion when the king of Kutch, Maharav Bharmalji II, held a grand welcoming procession for Lord Shree Swaminarayan. In that procession too, Lord Shree Swaminarayan presided in a golden howdah placed on the back of an elephant. The mesmerising gaze of the Lord and His Satpurushs is such that anyone who comes into their sight receives their divine blessings. It is for that reason that such processions are held.

Yesterday, on the fiftieth anniversary of when almighty Lord Swaminarayanbapa Swamibapa came to preside in Bhuj Mandir, the Lord granted us the darshan of so many enchanting, unforgettable events. The grand adoration ceremony was performed at His lotus feet, the anniversary ceremony took place, He was showered with gold flowers, and a vast array of foods was offered in the form of an annakut. May we remember and visualise that darshan continuously, both day and night, whilst awake and during our sleep.

The Sants and disciples here have all learnt the value of performing selfless service at Shree Swaminarayan Gadi. For that reason, they have worked hard in numerous different ways to make this festival the great success that it has been. Seeing their dedication, the Lord Himself gave them encouragement and strength to complete their tasks. It is actually due to the mercy of Lord Swaminarayanbapa Swamibapa that the festival has been so divinely delightful.

Lord Shree Swaminarayan says, “Such acts of selfless devotion are being written into My personal diary. I am continuously taking note of the physical, mental, and financial support given by each of you. You may not realise the value of this at present, but when the time comes and you are rewarded with the bliss of My Murti, you will understand.”

Jeevanpran Swamibapa says that the Lord has two diaries. One is His personal diary, whilst the other is His general diary. A person, who performs devotion to show off to others, has his name written in the Lord’s general diary. Whereas, a person who performs selfless devotion with the sole intention of pleasing God, has his name written in the Lord’s private, personal diary.

Once, deity Naradji went for the darshan of Shree Vishnu, but he was occupied with some work at that time. Naradji saw a large journal beside him, so he looked to see what was written in it. At the front of the book was written, ‘list of names of the devotees who perform devotion to me’. Naradji became eager to see whose names were written in this list. He started to flick through the book. Top of that list was his own name. He became ecstatic. He told everyone he met that his name was at the top of the Lord’s list of disciple’s names. He came across Hanumanji, who was chanting ‘Ram, Ram’ continuously, and performing ardent devotion. Naradji became inquisitive to know how far down Hanuman’s name was written in the Lord’s list. He went back to Lord Vishnu and asked to see his diary again. However, Hanuman’s name was not written anywhere. Naradji went back to Hanumanji and said, “You are performing so much devotion, yet your name is not even listed in the Lord’s diary.” Hanumanji replied, “Naradji! Have you seen the Lord’s private, personal diary? He keeps that diary always with him, in his vault.” Naradji became restless. ‘Whose names are in that special diary?’ he thought. He went to Shree Vishnu and asked, “Show me your personal diary.” He handed the diary to Naradji. The title on the front page read, ‘list of names of the devotees who I perform devotion to’. Naradji started to read the names. Hanumanji’s name was written at the top. He looked down the list, but could not find his own name anywhere. His ego was now completed deflated. Naradji asked Shree Vishnu, “Why is my name not in this diary?” Shree Vishnu replied, “The first diary that you saw contained the names of those who perform devotion to me in order to other people. In this diary, the names written are of those selfless disciples who perform my worship and devotion in order to please me. Such disciples rely on me alone for their support and strength, and therefore, I have a responsibility to take care of them.”

From that story, each and every one of you needs to look closely at your behaviours, thoughts, and actions. Which of the supreme Lord Shree Swaminarayan’s diary’s is your name listed?

We are fortunate to be able to experience the joy of the Lord here at Shree Swaminarayan Gadi. He remains present in a physical form here, at His eternal home. Learn to improve your life and ensure that your name get’s added to the list of the supreme Lord Swaminarayan’s most favourite disciples. In this manner, progress your life so that you can enjoy the love and eternal happiness that remains in the Murti of the Lord. Forever performing more and more deeds of selfless devotion like those seen during this festival will please Lord Swaminarayanbapa Swamibapa. And as a consequence, you will attain eternal salvation by His mercy. 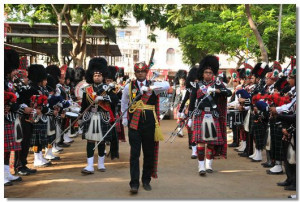 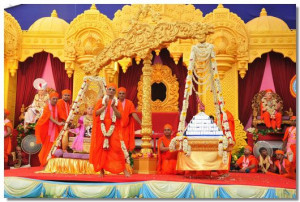 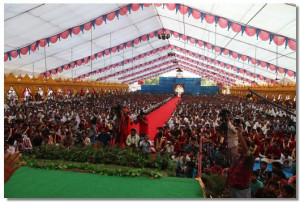 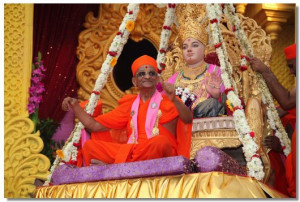 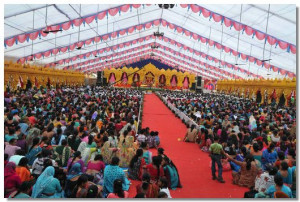 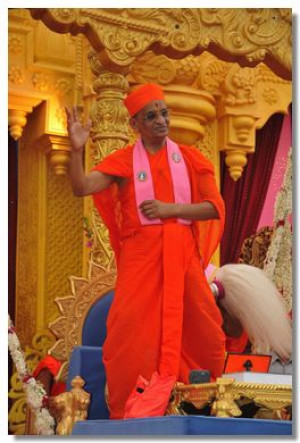