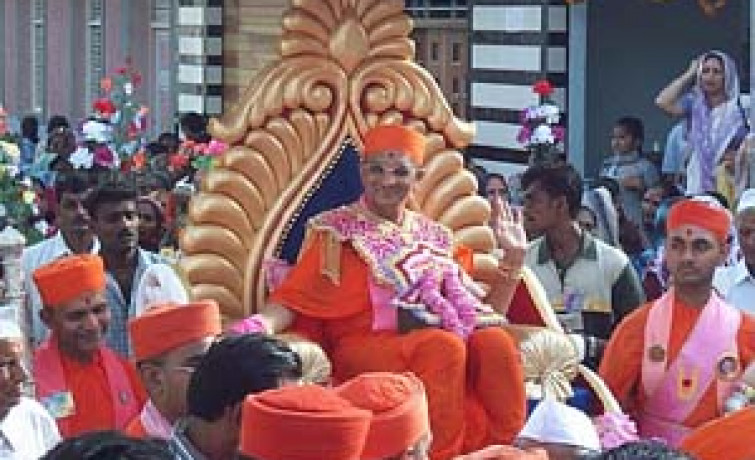 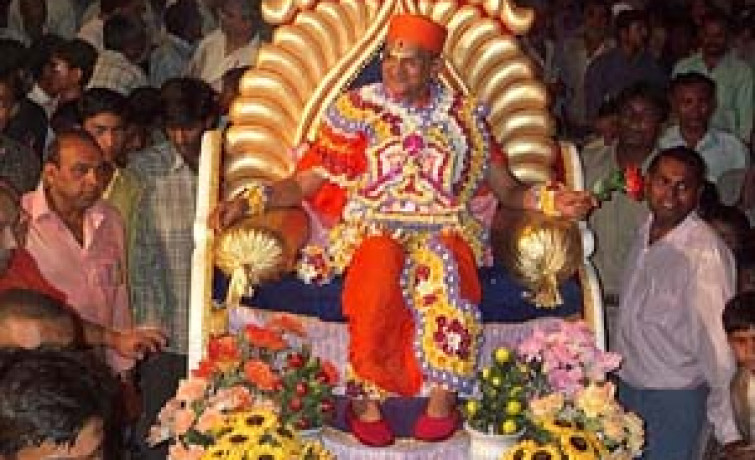 Jeevanpran Shree Abji Bapashree's name is alive today,
only as a consequence of the immense pain, suffering and endurance of
Jeevanpran Swamibapa

Jeevanpran Shree Abji Bapashree taught the true glory, supremacy and teachings of Lord Swaminarayan. As the Lord says in the Vachanamrut, "Bhagwan no nishchay, Bhagwan vateej thaay che". Faith unto God can only be truly gained from God Himself. God gives us an example. "If you wish to cut a diamond, you will require another diamond to do this." Jeevanpran Swamibapa says in one of His kirtans, "Pragat Prabhu vinaa bhai, koyee rite, moksh nav thaaye," Without attaining God Himself, salvation cannot be attained." Thus out of His immense mercy, Lord Swaminarayan gave darshan as Jeevanpran Shree Abji Bapashree to fulfil this very purpose, for the salvation of His disciples.

"Remember, we have not left them (referring to the so-called Ahmedabad - Nar-Narayan diocese of the Swaminarayan faith). They have thrown us out. We do not want to leave. But also, we do not want the continuous harassment and torment. We want to worship the Supreme Lord Swaminarayan and Bapashree in peace. We want to sing God's praises without restriction. They are not letting us do this. Are we going to stop? No! They are saying to us "Live in our house, but do not drink from our well." Are we going to stop drinking? No! We shall build our own well. If we stop drinking, what happens, we die. Are we going to let the name of Bapashree die? No! We are the true children of Lord Swaminarayan and Bapashree. Don't be afraid, sad or angry. We have "right" on our side. We have the Supreme Lord SwaminarayanBapa on our side."

As it says in the kirtan;

He who has Shreeji Prabhu on their side, their entire lives become blessed
No one in this world, can do any harm to him.
Our true Mother and Father, relentlessly look after us
Such is our gracious Shreeji Prabhu, Ghanshyam Prabhu.

The result of Swamibapa's speech has been linked to the starting of an electric generator. It sparked the generation of a new energy, a new force and determination into the hearts of all the satsangis. This energy materialised into the creation of a Trust. The aim of the heretics was to ensure that Jeevanpran Swamibapa could no longer propound the teachings of Jeevanpran Bapashree. They wanted to erase the mere existence of Bapashree. But on the contrary, the exact opposite happened. On that day, Jeevanpran Swamibapa established the Trust, Shree Swaminarayan Sidhant Sajivan Mandal. Under this umbrella, numerous Temples were created, and are still continually being built, throughout India and indeed throughout the world; for the propagation of the true principles of the Supreme Lord Swaminarayan, which had been explained by Jeevanpran Bapashree.

The first few Temples to be created under the Trust was in Mankuva, New District and in Ghanshyamnagar, Dahisara, the site where Shree Swaminarayan Sidhant Sajivan Mandal was formed.

It is 50 years since Jeevanpran Swamibapa installed the divine supreme Murtis of Lord SwaminarayanBapa Swamibapa in these Temples. With the immense divine blessings and encouragement of His Divine Holiness Acharya Swamishree, magnificent festivals, Suvarna Pratishtha Mahotsavs will be held in both these villages. These Golden Jubilee anniversaries will be celebrated with great pomp and ceremony and they form further facets of the ongoing ten-year long centenary celebrations, Shree Muktajeevan Swamibapa Shatabdi.