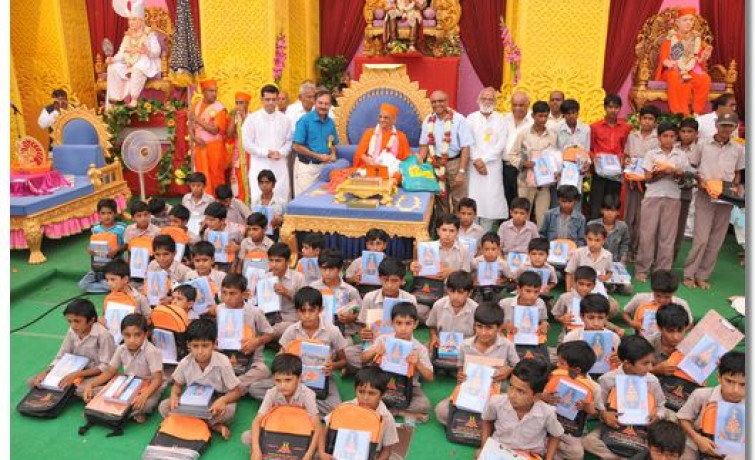 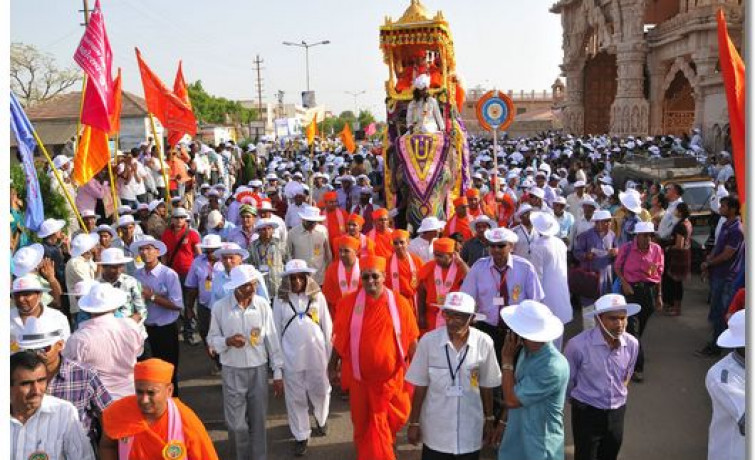 At 7 am on the fifth day of the Shree Ghanshyam Maharaj Suvarna Mahotsav Bhuj, sants concluded scripture recitals.

At 7 am on the fifth day of the Shree Ghanshyam Maharaj Suvarna Mahotsav Bhuj, sants concluded scripture recitals.

A number of charitable donations were also made on this occasion on behalf of Maninagar Shree Swaninarayan Gadi Sansthan to the SKLP Education and Medical Trusts, which will be used on schools in the Kutch region to provide study kits including textbooks, stationary and other study materials and school buses.

After this, His Holiness Acharya Swamishree Maharaj bestowed divine blessings to all the sants, disciples and guests.

On this fifth day of this golden jubilee festival, the recital concluding ceremony is being performed for the Vachanamrut Rahasyarth Pradeepika Tika scripture. A new edition of that sublime scripture, written using Gujarati fonts, is being published. Just as the English edition of that scripture is augmented with sketches that illustrate the key points of the text, the new Gujarati edition being published today includes these too.

The Vachanamrut scripture has many unique points of note about it.

The Vachanamrut scripture was compiled in the presence of Lord Shree Swaminarayan Himself, unlike the other Hindu scriptures, such as the Vedas or Bhagwad-Gita, which were written many years after the respective incarnations had departed from the Earth. In fact, the Chapter 7 of the Loya Section of the Vachanamrut mentions the instance when the Vachanamrut manuscript, containing 114 edited discourses, was brought to Lord Shree Swaminarayan by Shree Shukanand Swami; and He Himself authenticated it.

Furthermore, the Vachanamrut scripture contains the precise words of the Lord as He spoke them; unlike the previous scriptures, in which the particular incarnation’s teachings have been retold and interpreted by the sages.

Other scriptures based their narratives about the nature of the supreme God on inference; the authors themselves had not actually encountered the almighty Lord Shree Swaminarayan. In contrast, this scripture contains the words of God Himself. Only God Himself can truly appreciate the magnitude of His greatness; and only He can narrate His unsurpassed grandeur. These are the great narratives written in this Vachanamrut scripture.

To clarify the context of the Lord’s words and remove any ambiguity, the Lord Himself appeared in the form of Shree Abji Bapashree in 1845 CE, and Sadguru Shree Gopalanand Swami manifested again in the form of Sadguru Shree Ishwarcharandasji Swami in 1867 CE. Together, they created the Rahasyarth Pradeepika Tika (commentary) to the Vachanamrut scripture.

The Lord and His Satpurushs have immense mercy upon souls. They explain the fallacy of the material world to souls and lead them to recognise the true grandeur of the Lord. They ensure that souls learn to become separated from the perversions of lust, anger etc. and eliminate these flaws. In Gadhada Middle Section Chapter 13 of the Vachanamrut scripture, Lord Shree Swaminarayan says that He has nothing personal to gain; if He calls a person to Him or rebukes an individual, it is all for the benefit of that soul. Because, if the person were to understand the essence of what the Lord is trying to explain to him, he would realise the path of God and experience true bliss.

In the Shikshapatri scripture, verse 201, Lord Shree Swaminarayan commands that if anyone demonstrates cruelty towards them, either verbal or physical abuse, His disciples must endure this malice but not retaliate; and they should forgive those cruel people and pray for their welfare, but not even a bad thought towards them should enter the minds of His disciples.

Numerous acts of such ultimate mercy and kindness can be seen in the biographies of Lord Shree Swaminarayan and His eminent Satpurushs. They have shown love to souls in order to lead them closer to God. By living a life of spirituality and morality, they please the Lord and benefit themselves as well. The Lord says that by adhering to the commands and will of the Lord, the soul remains contented in this life, and thereafter.

May we all, in peace, harmony and accord within ourselves and amongst each other, forever remain in the shelter of the Lord, at Shree Swaminarayan Gadi. May enmity never develop for one another, nor may unrest arise between us.

Following Ashirwad, the disciples on whose behalf scripture recitals were held performed poojan to Acharya Swamishree Maharaj, before everyone took prasad lunch.

At approximately 8pm, the procession reached Sabha Mandap where the Nagaryatra 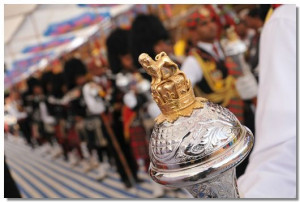 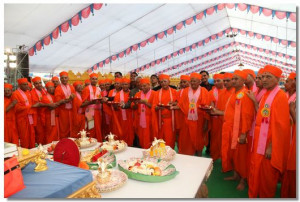 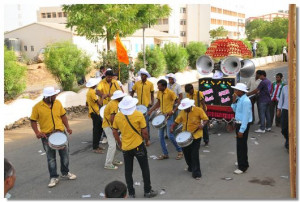 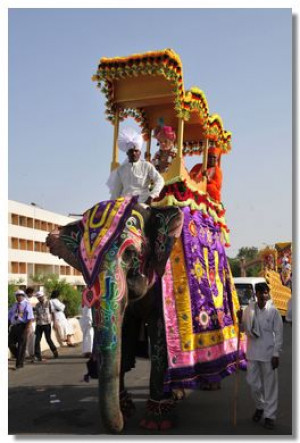 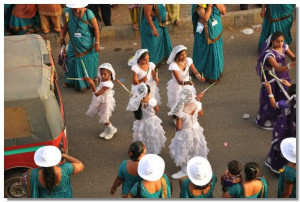 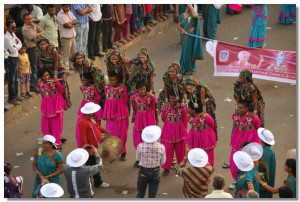