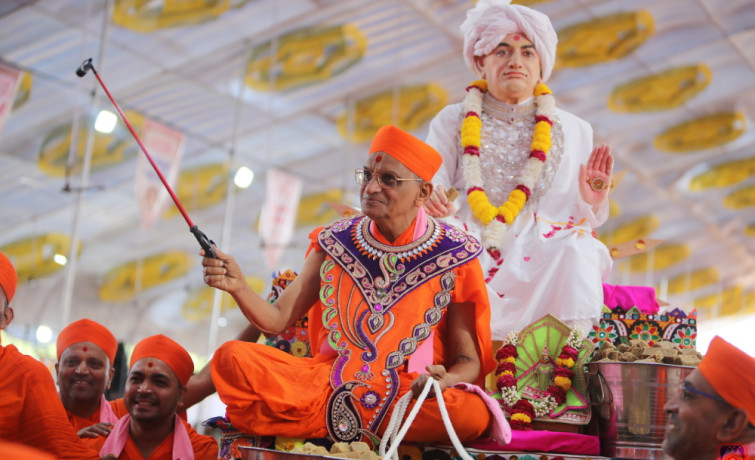 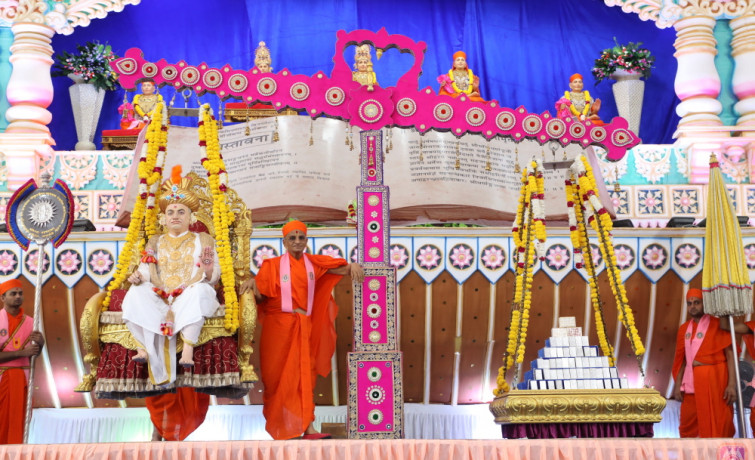 The fifth and final day of the Shree Vachanamrut Dwishatabdi Mahotsav and Shree Abji Bapashree Shatamrut Mahotsav was here – with so much joy and celebration, so much a divinity experienced throughout the festivals, the time had flown by. 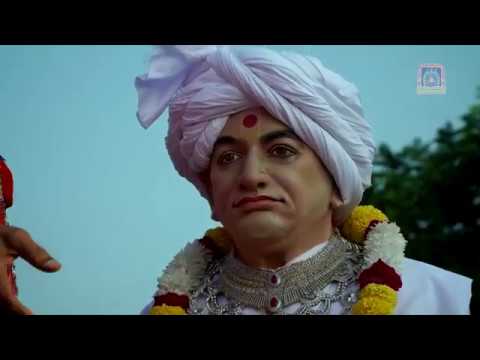 The fifth and final day of the Shree Vachanamrut Dwishatabdi Mahotsav and Shree Abji Bapashree Shatamrut Mahotsav was here – with so much joy and celebration, so much a divinity experienced throughout the festivals, the time had flown by.

The day started with a Shobha Yatra from Shree Swaminarayan Mandir Vrushpur to the Sabha Mandap, led by the combined Shree Muktajeevan Swamibapa Pipe Bands from India, London, Bolton, Nairobi and USA. The procession also featured a Shahi Swagat with disciples carrying various offerings for the Lord and others dressed in traditional Kutchi attire, performing ucchav. All the while, Acharya Swamishree Maharaj and Jeevanpran Abji Bapashree presided sat on an ornately decorated ox cart that His beloved Sants were pulling.

The cart was also carrying buckets full of Sukhdi prasad, and as soon as the procession reached the forecourt of the Sabha Mandap, Acharya Swamishree Maharaj began feeding all those gathered with it. The very same prasad was distributed to each and every individual in the Sabha Mandap – a staggering three and a half tonnes of Sukhdi was made to satisfy the spiritual desires of the some ten thousand attending these Mahotsavs. When Jeevanpran Bapashree used to hold grand mahotsavs in Vrushpur, He had Sukhdi made. He used to sit on the back of a cart and feed handfuls of the Sukhdi to all the disciples. In the exact same way, Acharya Swamishree Maharaj too distributed the prasad to everyone on this last day of the Mahotsav.

Jeevanpran Abji Bapashree was then ceremonially weighed during a Tula ceremony. At the beginning of the ceremony, Bapashree was adorned with a garland made entirely of sesame seeds, lovingly prepared by disciple in a show of devotion and dedication. He was then weighed against flowers first, and then against betel nuts, sugar, coconuts, dry fruits, pure silver, and finally against the ‘panch-ratna’ - five precious jewels including gold and diamonds. In between each weighing, a chhadi to salute Bapashree boomed out across the sabha.

Parayan sponsors were still streaming in, and come the end of Ashirwad, the grand total of Shree Abji Bapashree ni Vato recitals sponsored reached 2001 – a staggering show of love and devotion from the worldwide Shree Swaminarayan Gadi family, not just those who were able to personally attend. In a special acknowledgement to Sants for their incredible efforts in delivering such grand, magnificent and successful Mahotsavs, Acharya Swamishree Maharaj gifted each Sant with a prasad shawl.

An announcement was made regarding the new Shikshapatri Application that has been created with the blessings of Acharya Swamishree Maharaj.

Acharya Swamishree Maharaj also inaugurated Shree Swaminarayan Gadi Sayak fund – which is dedicated to the relief of poverty. To start the activities of this charitable project, 175 poor people in the village of Vrushpur and surrounding villages, who made a living selling goods from the roadside, were given trolleys and 20 cartfuls of whatever goods they were selling. In this manner, they were provided with the kickstart to earn a living in a more effective manner.

Disciples then had the opportunity to offer Aartis of Lord Swaminarayanbapa Swamibapa and Acharya Swamishree Maharaj, as Bapa was keen to ensure each and every person attending the festivals had their spiritual desires completely fulfilled – no-one was left wanting on this most auspicious of occasions. The day and Mahotsavs ended with everyone taking prasad lunch. 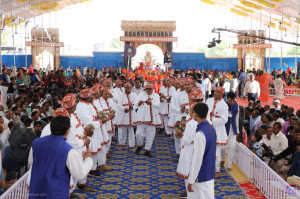 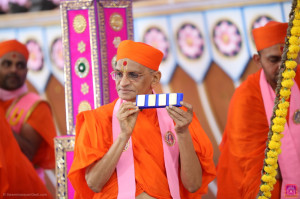 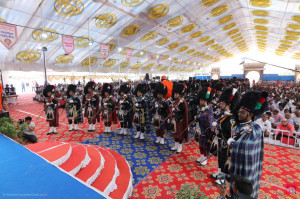 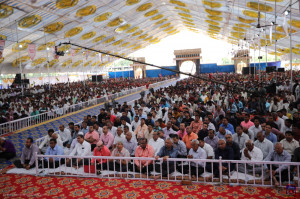 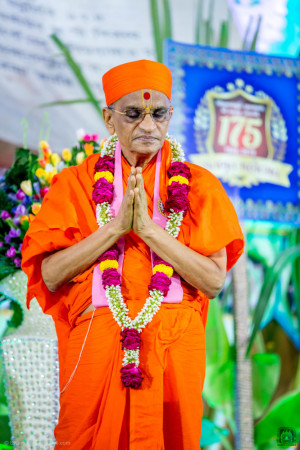 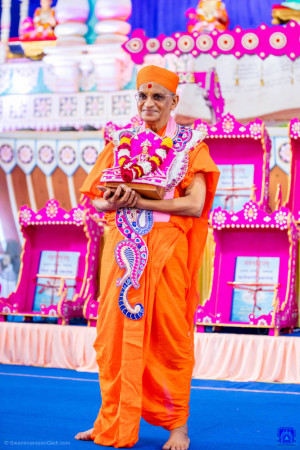