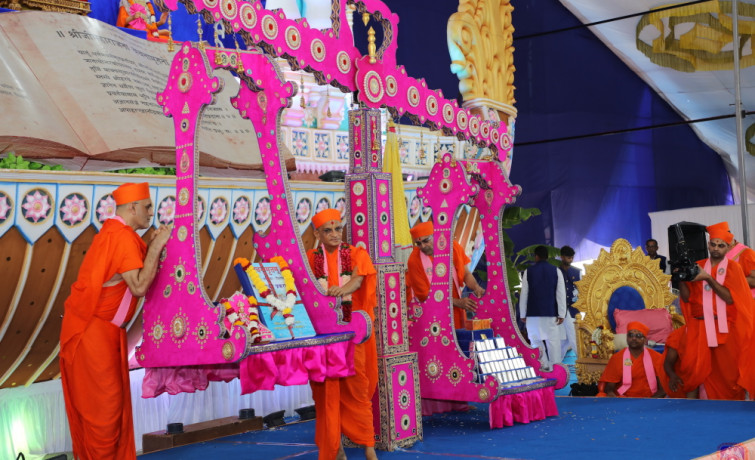 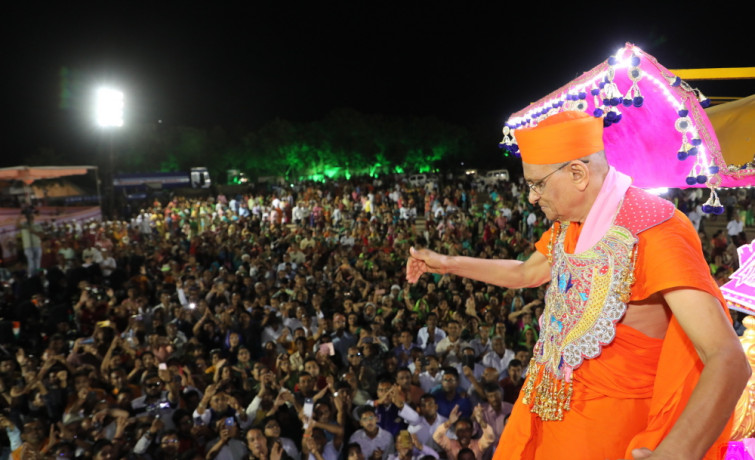 The third day of the Mahotsavs begun on a gloriously sunny morning with a short but beautiful parade. Acharya Swamishree Maharaj arrived at the forecourt of the Sabha Mandap, where the Bolton and USA branches of Shree Muktajeevan Swamibapa Pipe Band had formed a guard of honour. 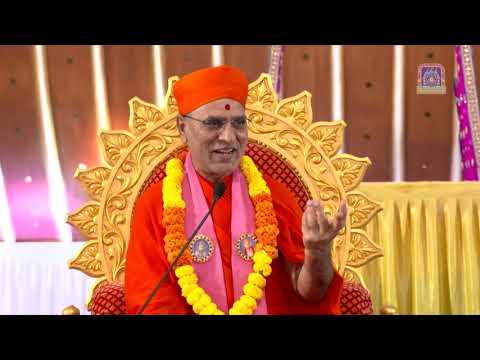 Today saw the conclusion of the Vachanamrut Rahasyarth Pradeepika Tika scripture, and so accompanying Acharya Swamishree Maharaj’s chariot into the Sabha Mandap were eleven palanquins held aloft by Sants, each containing the divine scripture. This wonderful spectacle made its way through the Sabha Mandap and to the Sinhasan.

The palanquins were arranged on the stage and Acharya Swamishree Maharaj offered poojan to the scriptures. Sant Shiromani Shree Vignanprakashdasji Swami recounted the episode where Lord Shree Swaminarayan told Dada Khachar that He would forever preside in this Earth in four forms – through Sants, Acharyas, scriptures and idols. As such, the Vachanamrut Rahasyarth Pradeepika Tika scripture is the Lord’s own form and worthy of the same reverence as God Himself. On behalf of the recital’s sponsors, Acharya Swamishree Maharaj performed aarti to the scriptures, thus concluding the poojan ceremony.

For the first time in history, Tula – ceremonial and reverential weighing – was performed of the Vachanamrut scripture. Acharya Swamishree Maharaj weighed the scripture against flowers, dried fruits and finally, pure silver. As the kirtan “Jagatna sarva granthoma Vachanamrut Granth saro chhe” (of all the texts in the world, the Vachanamrut scripture is supreme) boomed out through the Sabha, everyone was clapping with jubilation to its rhythm, enthralled by this unique darshan.

The Bands accompanied guests into the Sabha Mandap and saluted them. Amongst them were the State Election Commissioner of Gujarat Shri Sanjay Prasad, Chief Secretary of the Election Commission of Gujarat Shri Mahesh Joshi, and Deputy Election Commissioner Shri Ramanuj Sahib. “This, today, here, seems like the same atmosphere as was experienced some 200 years ago when the Lord was delivering the words in the Vachanamrut”, enthused Shri Mahesh Joshi. “Not only does Acharya Swamishree and this Sanstha spread the faith, but I have personally seen how much they do for the spread of societal values and charity,” applauded Shri Sanjay Prasad.

Various other guests and dignitaries came for Acharya Swamishree Maharaj’s darshan today, including representatives of the various societies in the village of Vrushpur and nearby villages.

His Divine Holiness Acharya Swamishree Maharaj then delivered His Ashirwad to all.

Various garlands were presented to Acharya Swamishree Maharaj. This included a garlanded on which the entire Vachanamrut Rahasyarth Pradeepika Tika had been hand written.

The morning’s event concluded with everyone taking communal Prasad lunch. 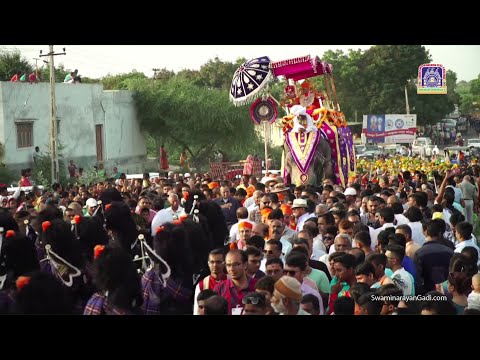 The afternoon of Thursday 7th November saw a splendid Nagar Yatra through the streets of Vrushpur. Five grand and regal elephants embellished the parade, respectively carrying the Murtis of Lord Shree Swaminarayan, Jeevanpran Shree Abji Bapashree and Gurudev Jeevanpran Shree Muktajeevan Swamibapa; the fourth elephant was presided upon by Acharya Swamishree Maharaj, and the final elephant carried the Vachanamrut Rahasyarth Pradeepika Tika scripture – the first time in history that the scripture has been paraded and honoured in this way.

Elephants symbolise royalty according to the traditions of India, have always held historical significance, and across the country are regarded as a precious animal. The history of the Swaminarayan Faith is also full of examples of grand parades involving elephants – today, that traditions is kept alive at Shree Swaminarayan Gadi through grand parades such as this.

Participants to the Nagar Yatra gathered on the outskirts of Vrushpur, adjacent to the Chhatri site that is so synonymous with Jeevanpran Abji Bapashree. As they waited for the procession to commence, disciples rejoiced and sang the praises of Jeevanpran Shree Abji Bapashree and also Gurudev Shree Muktajeevan Swamibapa – the actual protector of that Chhatri site. The five elephants, five branches of Shree Muktajeevan Swamibapa Pipe Band and hundreds of disciples gathered, eagerly awaited Acharya Swamishree Maharaj’s arrival.

The weather made for ideal conditions as the temperature cooled while the parade progressed. Thousands of onlookers and participants lined the streets of the village – crowds being several deep on the larger streets, and densely packed in the narrower ones. Despite the numbers of people, so many performers, elephants, etc – the likes of which this small village will not seen before - the parade progressed with total peace and decorum, with everyone able to calmly enjoy the darshan of Lord Shree Swaminarayanbapa Swamibapa and Acharya Swamishree Maharaj.

The Nagar Yatra passed via Shree Swaminarayan Mandir Vrushpur, where each Pipe Band paid salutations to the supreme Lord Shree Swaminarayanbapa Swamibapa, and concluded at the Sabha Mandap at Shree Sahajanand Sports Ground. Once in the grounds of the Sabha Mandap, the mass Bands performed pradakshina around Acharya Swamishree Maharaj’s elephant as He disembarked from His carriage, all the while thousands of disciples sing along to the Bands playing ‘Bolo re Bolo’ dhoon at the tops of their voices. This was a brilliant a jubilant end to a wonderful parade, to conclude the third day of these Mahotsavs. 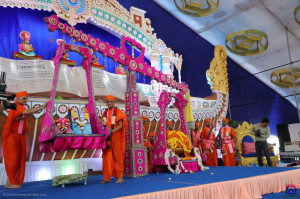 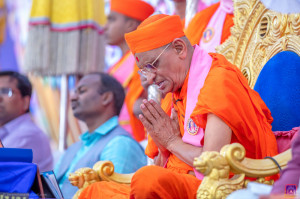 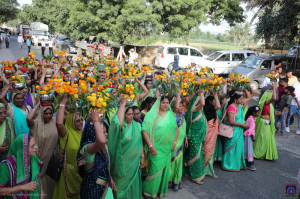 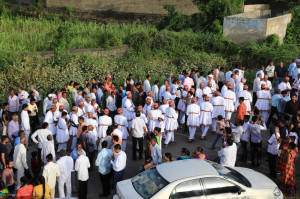 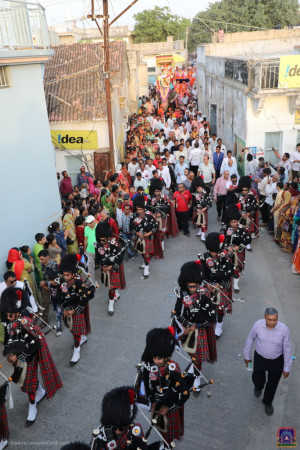 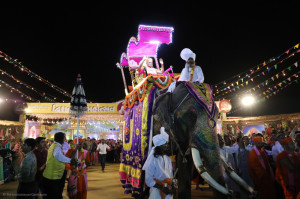