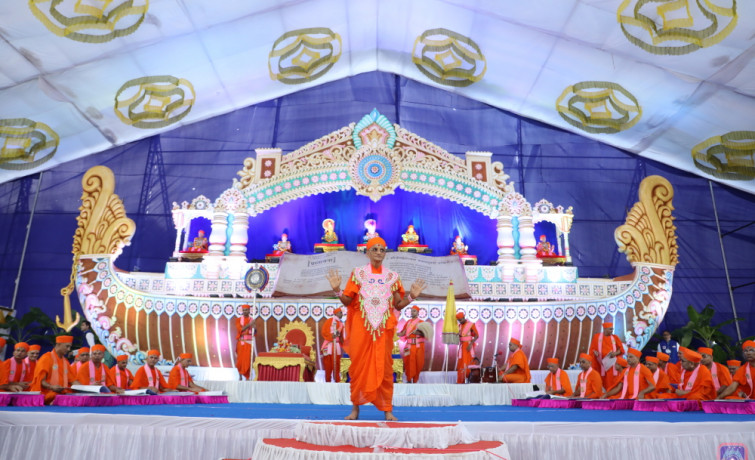 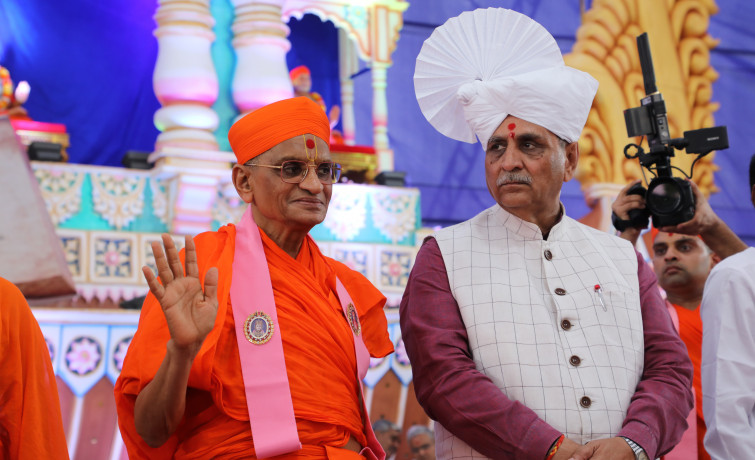 The first day of the Shree Vachanamrut Dwishatabdi Mahotsav and Shree Abji Bapashree Shatamrut Mahotsav got underway with on Tuesday 5th November with a grand parade from Shree Swaminarayan Mandir Vrushpur to the site of the Sabha Mandap at Shree Sahajanand Sports Ground. 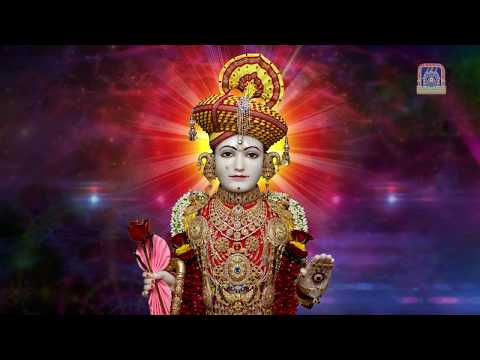 The first day of the Shree Vachanamrut Dwishatabdi Mahotsav and Shree Abji Bapashree Shatamrut Mahotsav got underway with on Tuesday 5th November with a grand parade from Shree Swaminarayan Mandir Vrushpur to the site of the Sabha Mandap at Shree Sahajanand Sports Ground.

Torrential rain and windy conditions of the last few days and weeks gave way just in time for the start of the Mahotsavs, as hundreds of disciples gathered outside the Mandir in the morning, with many thousands more in the Sabha Mandap – all eagerly awaiting the divine darshan of Acharya Swamishree Maharaj. All five branches of Shree Muktajeevan Swamibapa Pipe Band formed up before Acharya Swamishree Maharaj’s golden chariot. As soon as He presided on the chariot, the Bands paid their salutation and marched off, leading the parade through the streets of Vrushpur, and uphill to the Sabha Mandap.

The scripture recitals commenced today, shortly after the poojan ceremony that took place earlier this morning. Recitals of the scriptures Vachanamrut Rahasyarth Pradipika Tika, Shree Swaminarayan Gadi Granth and Shree Abji Bapashree ni Vato Parts 1 and 2 are taking place through the duration of the five-day Mahotsav. Soon after Acharya Swamishree Maharaj arrived to the Sabha Mandap and presided on His throne amidst the grand sinhasan. He personally recited the sixth chapter of the Gadhada First Section of the Vachanamrut Rahasyarth Pradipika Tika scripture.

His Divine Holiness Acharya Swamishree Maharaj then showered His divine Ashirwad to the several thousand that filled the entire Sabha Mandap – disciples had travelled from Europe, North America, Australia and East Africa, and of course from all across Gujarat and India, including 3000 who had travelled from the rural Panchmahal region.

In keeping with all Mahotsavs under the umbrella of Maninagar Shree Swaminarayan Gadi Sansthan and under the inspiration of Acharya Swamishree Maharaj’s philosophy that, ‘Dedicating one's life to the service of others is the truest celebration of a festival’, several substantial donations were made to local charities and causes on this auspicious occasion. The first morning of the festivals ended with everyone taking prasad lunch.

A special assembly for very young disciples was held during the afternoon of day 1. Shri Rajeshbhai Dhameliya gave a splendid and highly informative talk about the way of thinking positively and behaving in a manner so that the children grown up happy and contented, and that they can forge a firm foundation for the progression of their life. 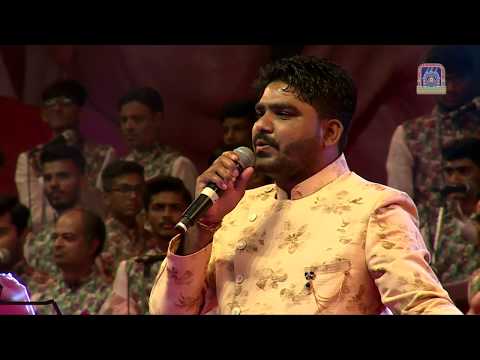 Crowds gathered early in a specially erected temporary concert hall adjacent to the Sabha Mandap, and took their seats – eagerly awaiting the arrival and darshan of Acharya Swamishree Maharaj. With the venue filled to the brim, Acharya Swamishree Maharaj soon arrived to preside at the front on the congregated audience, along with His beloved sants. The first performance of the evening was a rendition of the Indian National Anthem. The rousing Anthem saw everyone stand up to pay respect to the Nation, which lasted precisely 52 seconds – this year marked the 52nd anniversary since India gained independence from the United Kingdom on 15 August 1947.

The performances that followed were a wonderful mix of heartfelt poetic songs and upbeat numbers. The lyrics focused on the purpose of the two festivals being celebrated – the glory of the Vachanamrut and Jeevanpran Shree Abji Bapashree. 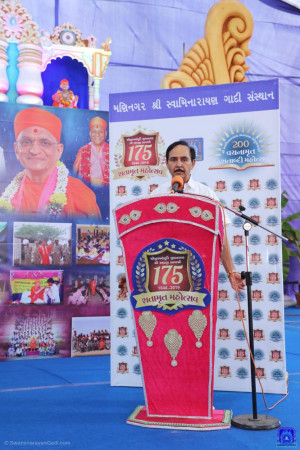 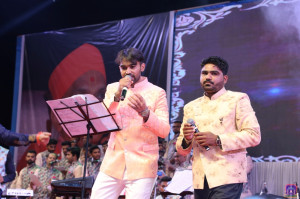 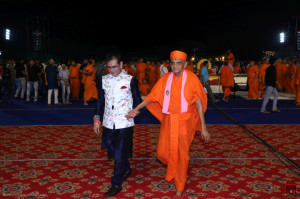 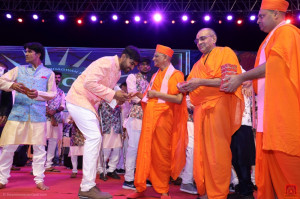 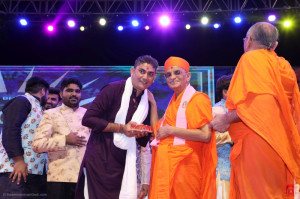 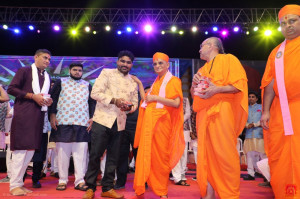