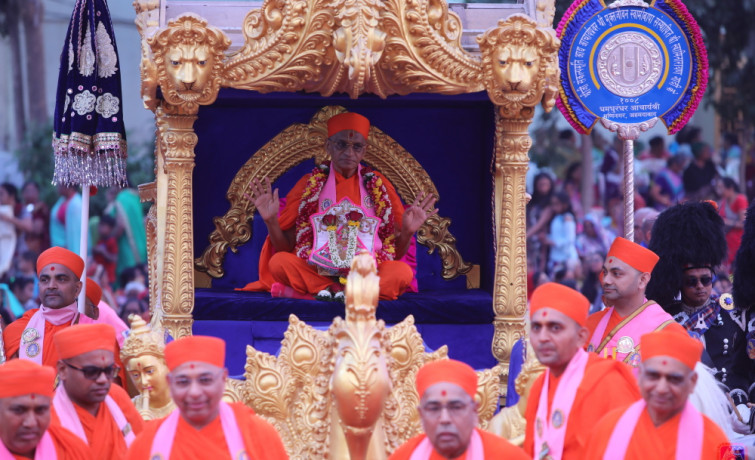 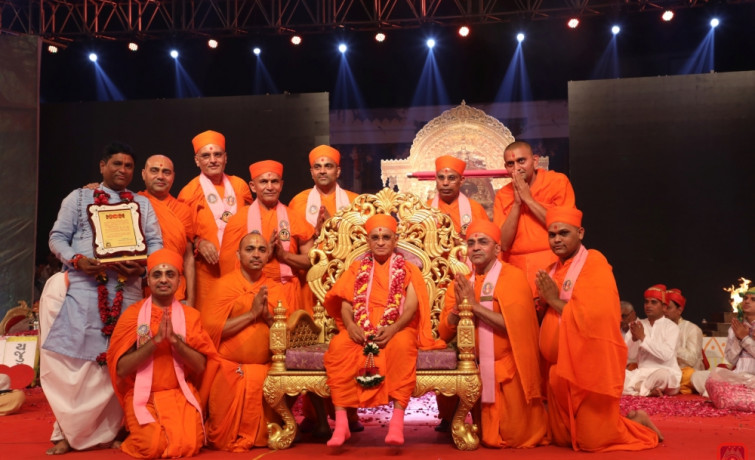 The second day of Shree Ghanshyam Maharaj Amrut Pratishtha Mahotsav, Maninagar, got off to an earlier start today, with the ongoing recitals of our sacred scriptures taking place from early morning. 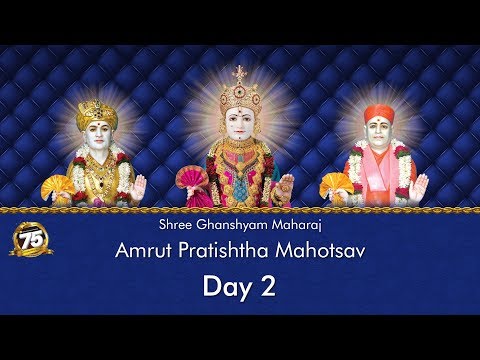 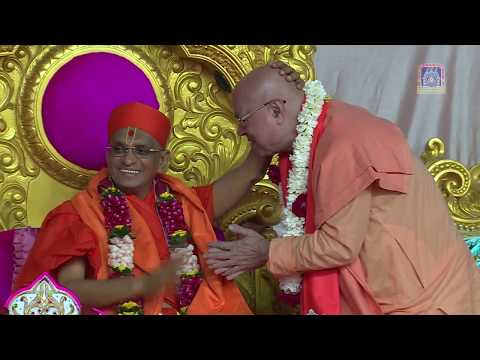 While the sun was beaming down brightly, a cooling and soothing breeze made for comfortable conditions. Shree Muktajeevan Swamibapa Pipe Band Maninagar had the privilege of escorting Acharya Swamishree Maharaj from Shree Swaminarayan Tower to the Sabha Mandap this morning. With so many of its sister Bands in attendance at this grand Mahotsav, each one will take in turns for this honour. The Band escorted Acharya Swamishree Maharaj’s chariot, which was being drawn by His beloved Sants, inside and onto the stage, where they saluted Him before departing.

Without much delay, Acharya Swamishree Maharaj presided on His throne, and showered His divine Ashirwad on everyone.

Today’s main guest was Acie Fabon, founder and president of international NGO, Public Assistance for Rescue, Disaster and Support Services (PARDSS). She spoke eloquently about the nobility of Acharya Swamishree Maharaj and His immense contribution to society. She particularly praised His inspiration to establish Shree Muktajeevan Swamibapa Disaster Management & Rescue Training Academy, which mobilises to help those in most acute need during times of natural disaster. She concluded with the heartfelt words, “Accept my words – You [Acharya Swamishree Maharaj] are one of the greatest gifts to mankind.”

Today saw the conclusion of the recital of the Shree Swaminarayan Gadi scripture, and so the sponsoring disciple had the honour of offering gifts (chaabs) to Lord Shree Swaminarayanbapa Swamibapa and Acharya Swamishree Maharaj. The morning Sabha of the second day of the Mahotsav ended, and the entire sabha took prasad lunch. The afternoon sabha saw continued recital of the Rahasyarth Pradeepika Tika sah Vachanamrut scripture. 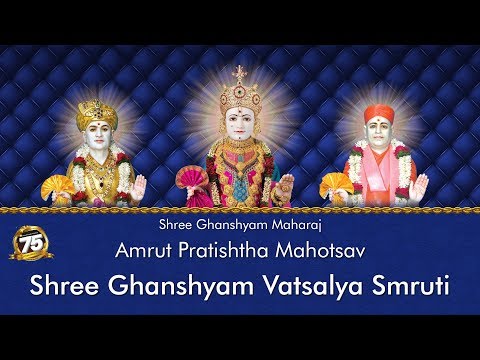 Tonight’s evening programme was a musical production depicting the arrival of Shree Ghanshyam Maharaj to Maninagardham precisely 75 years ago.

Acharya Swamishree Maharaj arrived onto the grand stage at Shree Muktajeevan Swamibapa Smruti Mandir to commence the evening - giving His divine darshan to the thousands who had gathered in the audience. He soon took His seat to preside over the evening, and the performances began.

The story commenced with the plans to purchase the land on which the headquarters of Maninagar Shree Swaminarayan Gadi Sansthan would soon be built. Sadguru Shree Ishwarcharandasji Swamibapa insists the land must be purchased under a legally established trust, not in any individual’s name, and thus, Shree Swaminarayan Uttejak Trust was born.

During the re-enactment, the Pratishtha ceremony was recreated in meticulous and wonderful detail, including a flaming haven and live mahapooja, panchamrut snan was performed to the Lord, and a grand Annakut of sweets was offered to Him - all just as it was in 1944 CE.

Towards the end of the evening, Acharya Swamishree Maharaj took to the stage to personally perform the Pratishtha aarti, with the entire sabha following suit and performing mass aarti the modern, technology-assisted way - using their mobile phone flashlights!

This year is doubly prestigious for not only does it mark 75 years since the arrival of Shree Ghanshyam Maharaj to Maninagar, but it also marks 40 years since Acharya Swamishree Maharaj was bequeathed with the leadership of the entire Karan Satsang by Jeevanpran Swamibapa, thus enthroning Him as the sovereign of Shree Swaminarayan Gadi - the Lord’s own supreme throne. To celebrate this occasion, an Annakut was also offered in front of Acharya Swamishree Maharaj. Sants offered sweets to Him as the entire sabha clapped along with great enthusiasm, to end this memorable evening with a wonderful crescendo. 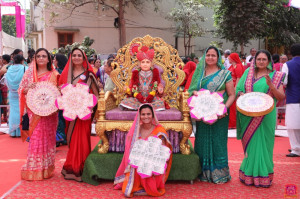 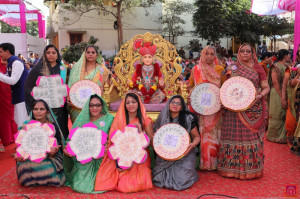 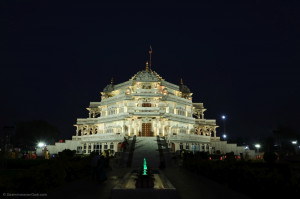 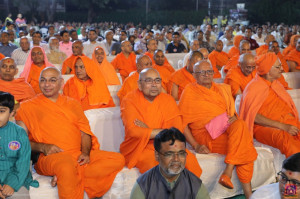 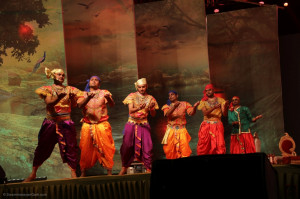 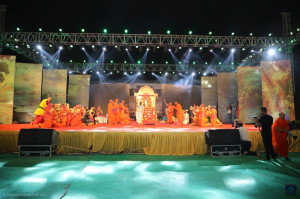