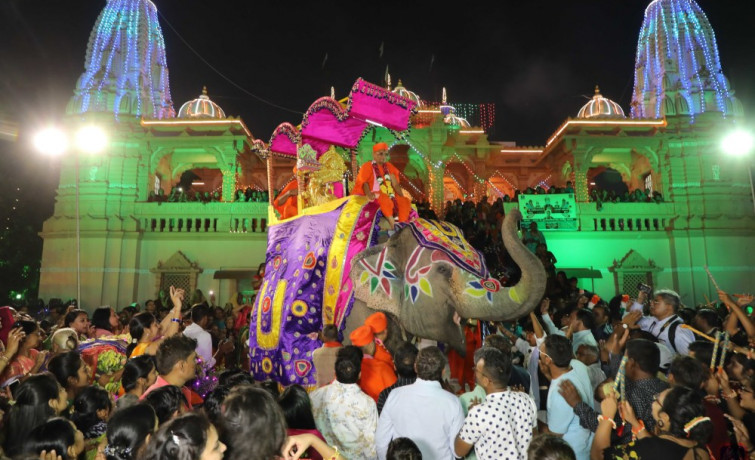 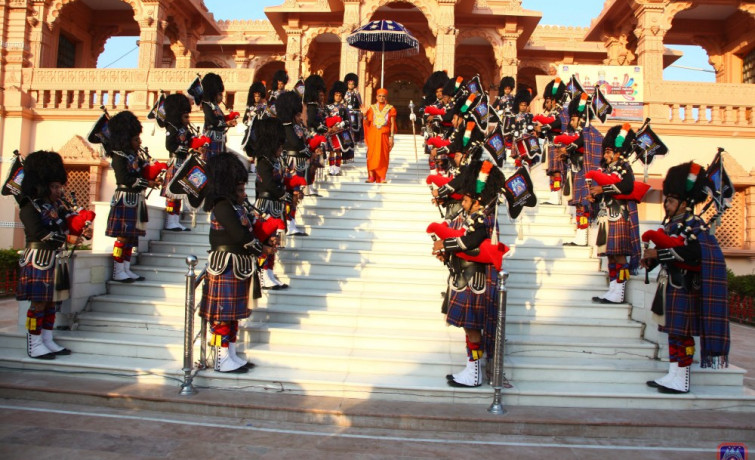 On the second day of the festival to celebrate ten years since the establishment of Surat Mandir, Acharya Swamishree Maharaj performed the conclusion of ‘Shree Swaminarayan Gadi’ scripture recitals.

On the second day of the festival to celebrate ten years since the establishment of Surat Mandir, Acharya Swamishree Maharaj performed the conclusion of ‘Shree Swaminarayan Gadi’ scripture recitals. A blood donation session was also held as part of the on-going health and charitable campaign actively promoted by Maninagar Shree Swaminarayan Gadi Sansthan.

Shree Muktajeevan Swamibapa Pipe Band, Maninagar led a short procession from the main Mandir steps to the Sabha Mandap. Acharya Swamishree Maharaj’s golden chariot was drawn by the sponsoring disciples to the front of the Sabha Mandap, which was filled with hundreds of disciples from around the world.

In his divine blessings, Acharya Swamishree Maharaj described the virtues and understanding of true disciples of the Lord, and taught the manner of reforming one’s thoughts and actions so that they align with the directives of supreme Lord Shree Swaminarayan.

A gathering of Surat’s leading, highly charitable and respected businessmen was a highlight of the morning’s assembly. Acharya Swamishree Maharaj blessed and commended them for their generous work for supporting those in need within the city and surrounding areas.

In the presence of these eminent guests, Maninagar Shree Swaminarayan Gadi Sansthan made charitable donations of over 27 lakh rupees. Donations were given for the fund set up to support the families of the martyrs killed in the recent unrest in Kashmir, to regional cow sanctuaries, and towards projects for supporting women in need. Donations of sewing machines were made to poor widows of the Surat region so that they can earn a living and support their families.

During the afternoon, a grand procession of peace and unity was held from the centre of Surat to the Mandir. Two majestic elephants and golden chariots carried the Lord through the 3 mile procession. Shree Muktajeevan Swamibapa Pipe Band Maninagar performed in front of Acharya Swamishree Maharaj’s elephant.

Spectacular chariots, thunderous dhol drums, beautifully costumed dancers, carnival performers, and melodious sound of various bands attracted all the onlookers. Acharya Swamishree Maharaj looked on from the back of the elephant, giving darshan and showering divine blessings to thousands of Surat’s inhabitants.

After over two hours of festivities, the parade reached the Mandir. Joyous, dancing disciples led Acharya Swamishree Maharaj up the steps into the Mandir, where he performed the Sandhya aarti and evening rituals. 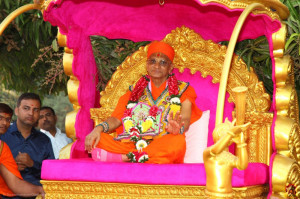 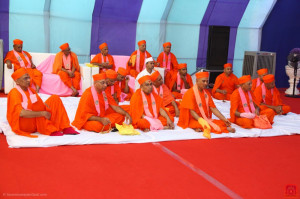 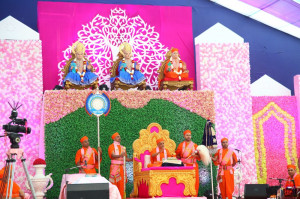 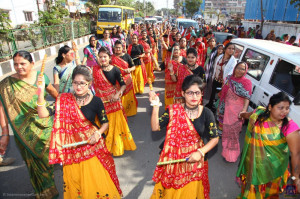 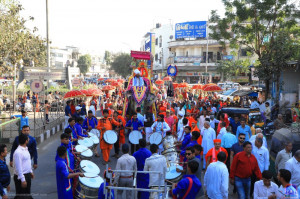 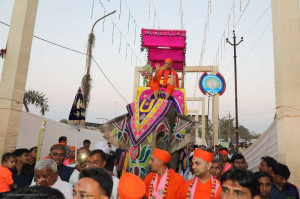