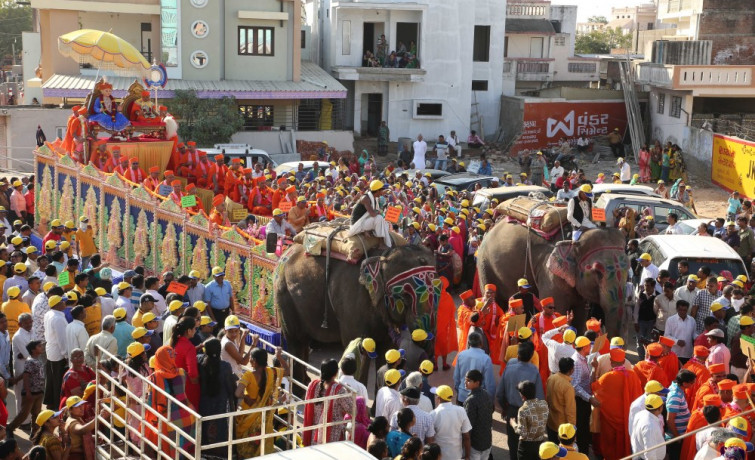 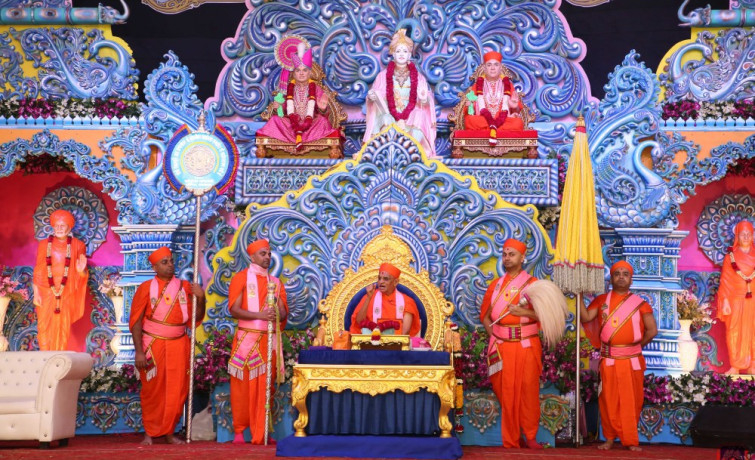 Saturday 16th February marked the second day of the Shree Ghanshyam Maharaj Shatabdi Mahotsav Kadi. Highlights of the day included Acharya Swamishree Maharaj’s Ashirwad, a peace procession through the streets of Kadi, and the conclusion of recital of the ‘Shree Swaminarayan Gadi’ scripture. 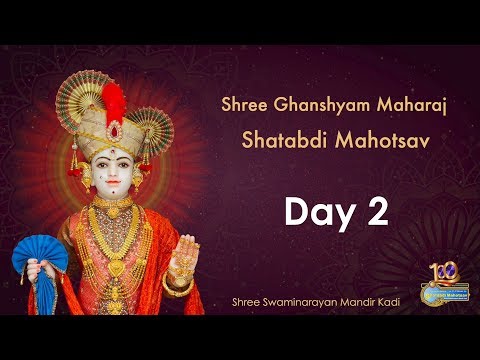 Saturday 16th February marked the second day of the Shree Ghanshyam Maharaj Shatabdi Mahotsav Kadi. Highlights of the day included Acharya Swamishree Maharaj’s Ashirwad, a peace procession through the streets of Kadi, and the conclusion of recital of the ‘Shree Swaminarayan Gadi’ scripture.

Shree Muktajeevan Swamibapa Pipe Band, including members from India, London and Bolton, led a short procession to lead Acharya Swamishree Maharaj into the Sabha Mandap. His golden chariot was drawn by the sponsoring disciples to the front of the Sabha Mandap, which was filled with hundreds of disciples from around the world.

Acharya Swamishree Maharaj showered His divine, blissful, Ashirwad to everyone. During His Ashirwad, He recalled a time when Jeevanpran Swamibapa prayed, “May the whole world become auspicious” – an episode that is captured in a famous photograph of Swamibapa with joined hands. Given the recent atrocity that took place in Kashmir, when some 40 paramilitary police were murdered by militants, Acharya Swamishree Maharaj has taken every opportunity to pray for the souls of those who died, and for the wellbeing and recovery of those injured. Today, He referred to the entire festival as the Vishwa Mangal Mahotsav – the festival to make the entire world auspicious – in reference the Kashmir attacks, in praying for, and inspiring, peace in that region as well as the world over. It was only recently that Acharya Swamishree Maharaj was dignified by the title “World Peace Ambassador” by the International Peace Research Association for exactly this kind of inspiration and for spreading the message of peace and tolerance all over the world.

The main guest of the Mahotsav soon arrived; Shri Nitinbhai Patel (Deputy Chief Minister of Gujarat and cabinet minister for Health, Medical Education, Family Welfare, Road and Building, Capital Projects) was saluted by Shree Muktajeevan Swamibapa Pipe Band at the entrance to the Sabha Mandap, and escorted to the stage to have the darshan of Acharya Swamishree Maharaj by the Band. He was accompanied by Gujarat Police Housing Chairman, Shri D D Patel. Both were adorned with the Swaminarayan Gadi paagh (turban) and presented with flower garlands by Acharya Swamishree Maharaj.

The morning concluded with everyone receiving prasad lunch. 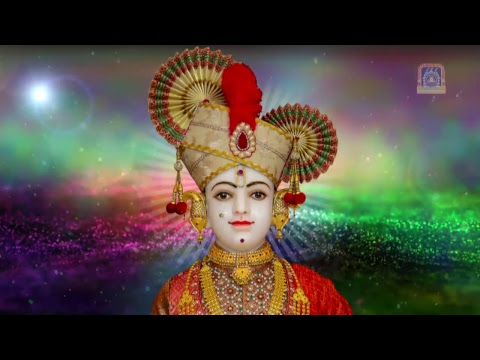 It is traditional that the major festivals of Maninagar Shree Swaminarayan Mandir include a parade through the streets of the locale. There is a long and rich history of such processions in the Karan Satsang, which are often loud, colourful, joyous and grand affairs, full of music, dance and fervour. The aim of these Nagar Yatras is solely to bestow eternal salvation to all those who take part or even witness these spectacles.

Just such a Nagar Yatra was planned for the middle day of Shree Ghanshyam Maharaj Shatabdi Mahotsav Kadi – indeed Lord Shree Swaminarayanbapa Swamibapa and Acharya Swamishree Maharaj were due to preside on four grand elephants throughout the spectacular parade, and several music bands had been invited. However, in the wake of the devilish, cowardly and devastating attacks on the Indian paramilitary police on 14th February, the tone of the Nagar Yatra was transformed to a fitting, more solemn, one – in keeping with the period of mourning declared across India.

Thousands of disciples took part in what was now a Peace Parade, seeking to spread the message of peace and tolerance, express solidarity with the attack’s victims and their families, and condemn the vileness of the attacks. World Peace Ambassador Acharya Swamishree Maharaj presided over the Peace Parade, giving His splendid and divine darshan throughout the 2.5km route. Thousands of local Kadi residents took to the streets as the Peace Procession passed, taking in the messages of peace and prayer, which were carried on countless placards and banners by participants.

Shree Muktajeevan Swamibapa Pipe Band was the only Band to play throughout the Peace Parade. With their blend of Indian and Western melodies, comprised of members from all over the world, there is perhaps no better personification of diversity and unity, and perfectly apt for the Peace Procession. Their military-style discipline and marching flair, a fitting tribute to the paramilitary police that were martyred only days ago.

The Peace Procession ended at the Sabha Mandap after which everyone took prasad dinner. The Evening saw a concert of devotional songs presented by the poet Dhaval Soni and renowned folk singer Kaushik Bhojak. 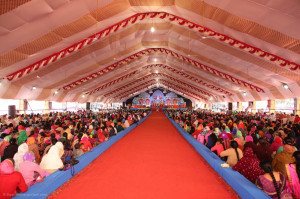 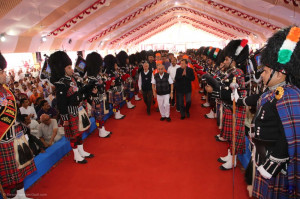 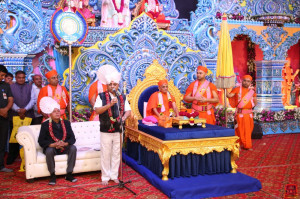 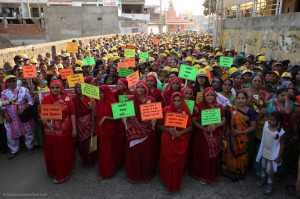 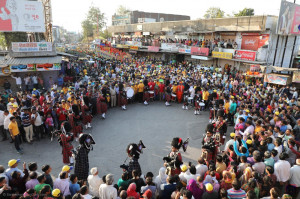 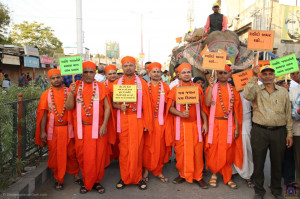