Emigration of Disciples to East Africa

With the command and divine blessings of Jeevanpran Shree Abji Bapashree, disciples from Kutch and Gujarat emigrated from India to Africa in the early 1900’s to progress and improve their standards of living. At the same time, it was Shree Abji Bapashree’s intention to start the spread of the Swaminarayan Sampraday throughout the world.

Initially the disciples settled at the coastal towns of Mombasa, Dar-es-salaam and the Zanzibar Islands, where they worked as labourers in the construction industry and on farms. As time passed, with the blessings of Lord Swaminarayan, some disciples started their own business as traders and building contractors. Gradually, the disciples started to settle down and establish themselves properly, and went to live in large cities, such as Nairobi, Arusha and Kampala.

The disciples were proud of their origins, and were adamant that the blessings of Lord Swaminarayan and Jeevanpran Bapashree that they had attained were never forgotten, even though they were living in foreign lands; because it was due to the blessings and divine grace of the Lord that they had attained such prosperity. They wanted to ensure that future generations remained adherent to the supreme Faith. With this in mind, and as the number of devotees gradually increased, they formed the East Africa Satsang Mandal, in the year 1946. Under the auspices of this Mandal, a temple was built in 1947, in which they installed a Murti of Lord Swaminarayan. Devotees gathered in this temple for prayers and discourses and thus continued with their faith in the Swaminarayan religion.

Nearly 50 years had passed since the disciples first settled in East Africa. In all that time, no religious leader or sadhu had ever come to East Africa to impart spiritual enlightenment to them. No-one had the courage to leave Indian soil and visit Africa; no sadhu had even thought of doing this. On the other hand, the devout disciples of East Africa were yearning for the blessings of their spiritual leader. 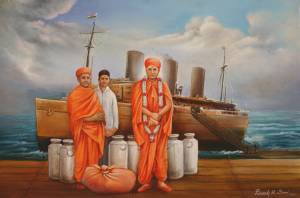