The word Diwali is derived from the Sanskrit word Deepavali and literally translated means a row of lights. For this reason, the Diwali festival is sometimes referred to as the Festival of Lights.

This year, Shree Swaminarayan Mandir Kingsbury’s Diwali and Hindu New Year Celebrations are dedicated in commemoration of our beloved Acharya Swamishree Maharaj, who withdrew His human darshan from this world earlier this year. All the events during this auspicious period will be in memory of His remarkable life, in celebration of the treasure trove of teachings He gave us, and in appreciation for the essential values that He enlightened our lives with. He truly is The Divine Light in our Lives.

The Diwali festival lasts for five consecutive days. Each day has a significance that was derived from various episodes of Hindu legends. Depending on the region of India, these legends will vary. However the essence behind each story is the abolishment and conquering of evil and darkness, replaced by the goodness and light. 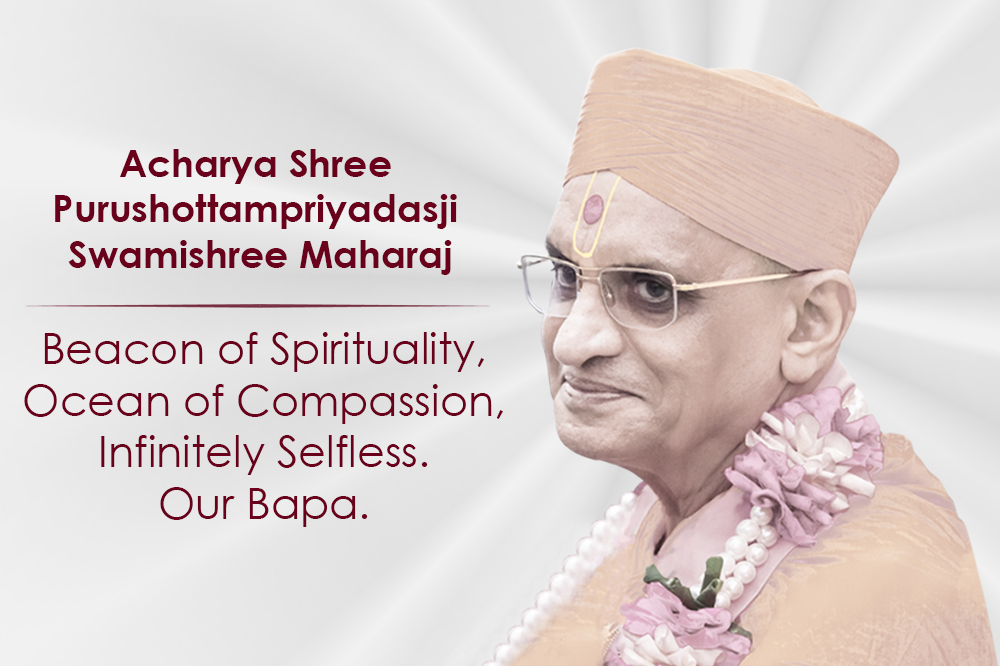 This year’s celebrations are dedicated to our beloved Acharya Swamishree Maharaj, who withdrew His human darshan from this world earlier this year. To learn about His remarkable life, the treasure trove of teachings He gave us, and the essential values He enlightened our lives with, visit this commemorative website. 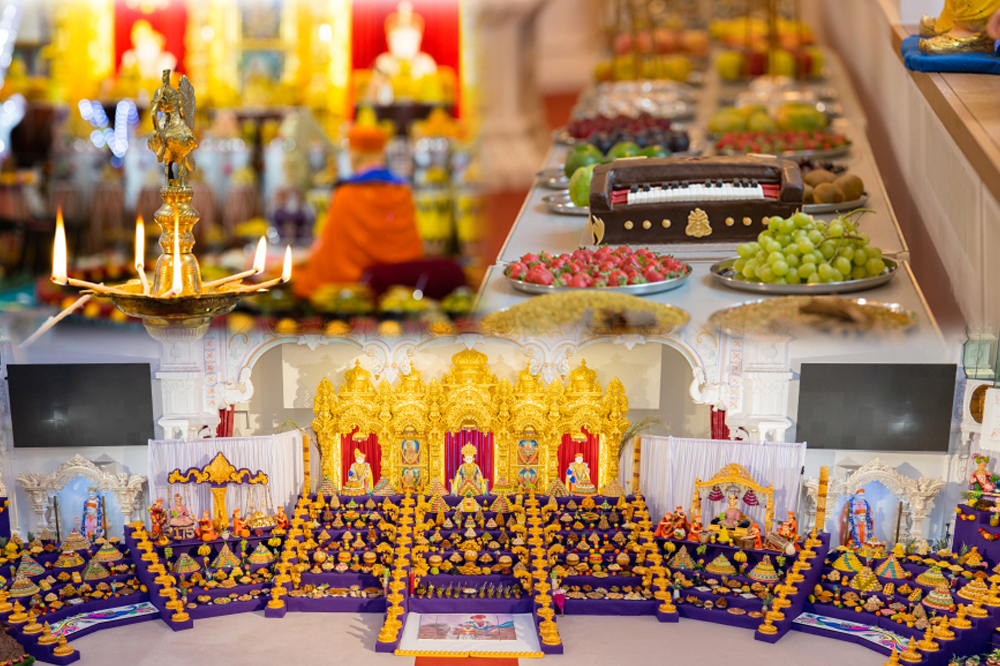 This year’s celebrations will be significantly different due to the current circumstances, with the Mandir being open for only limited periods, and many of the events taking place online – all for the convenience and safety of all. In order to alleviate congestion at the Mandir during this time, and to allow everyone to be able to make Annakut Aarti and Thaal donations, we are pleased to take donations online via the donations page.

You will receive a receipt and instructions for collecting Annakut prasad by email.

Due to the current circumstances, Mandir will not be open as usual during this Diwali and Hindu New Year. 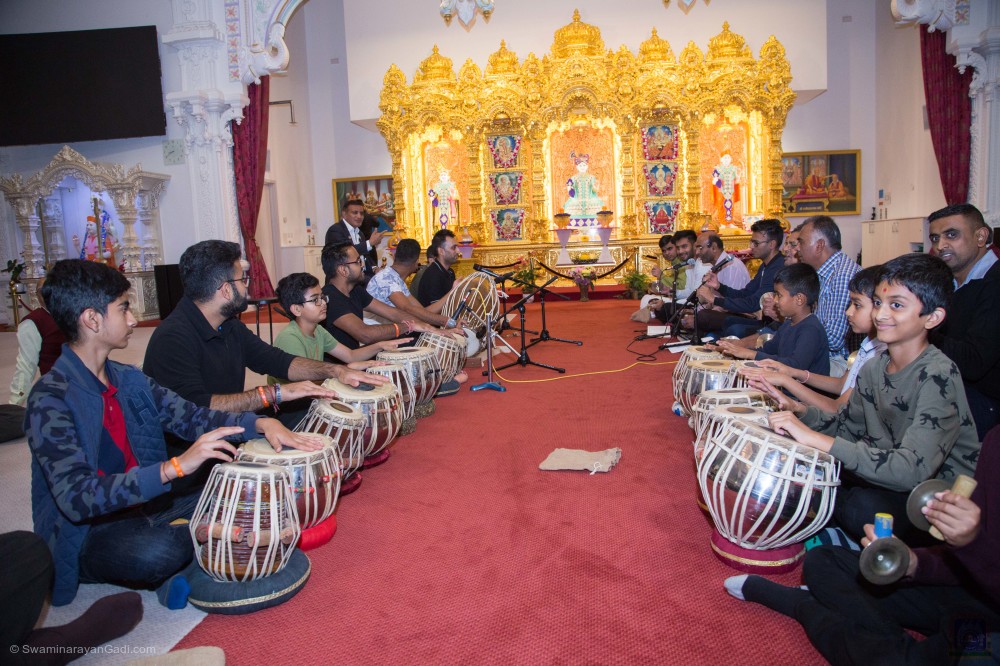 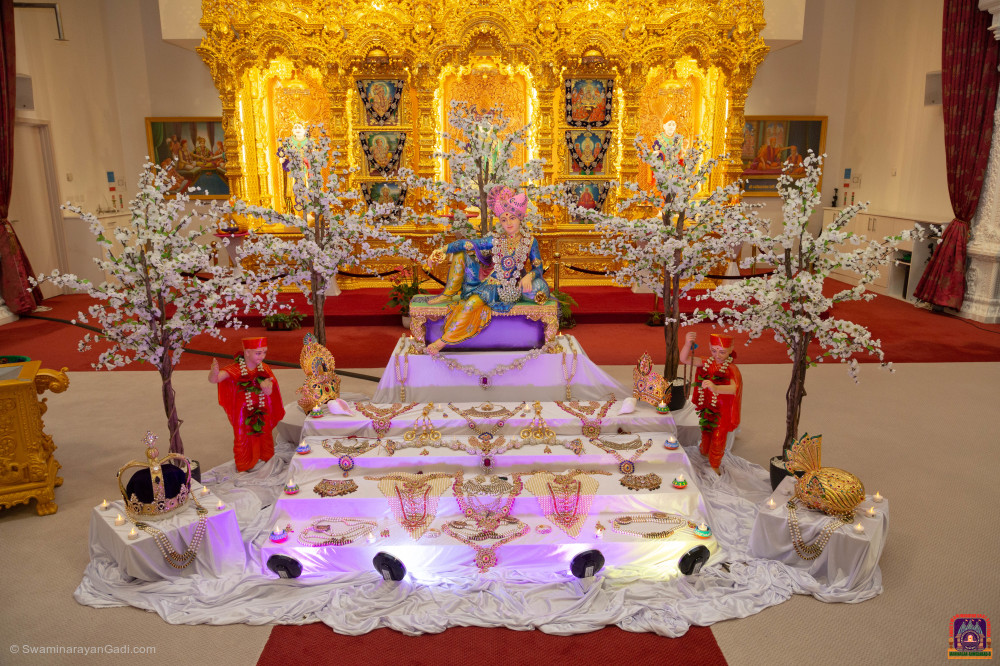 The first day is called Dhan Teras. It is also sometimes called Dhantrayodashmi. Dhan literally means wealth. In the past, the number of cattle that was owned determined one's wealth; therefore, the cow was offered worship on this day. Over the centuries, this has evolved to offering poojan to Laxmi, the deity of wealth. In this context, Laxmi is personified through currency and a ceremony involving money is traditionally performed on this day. The sentiments behind this are that we must remember never to obtain money in any manner that contravenes the path of morality, of dharma. 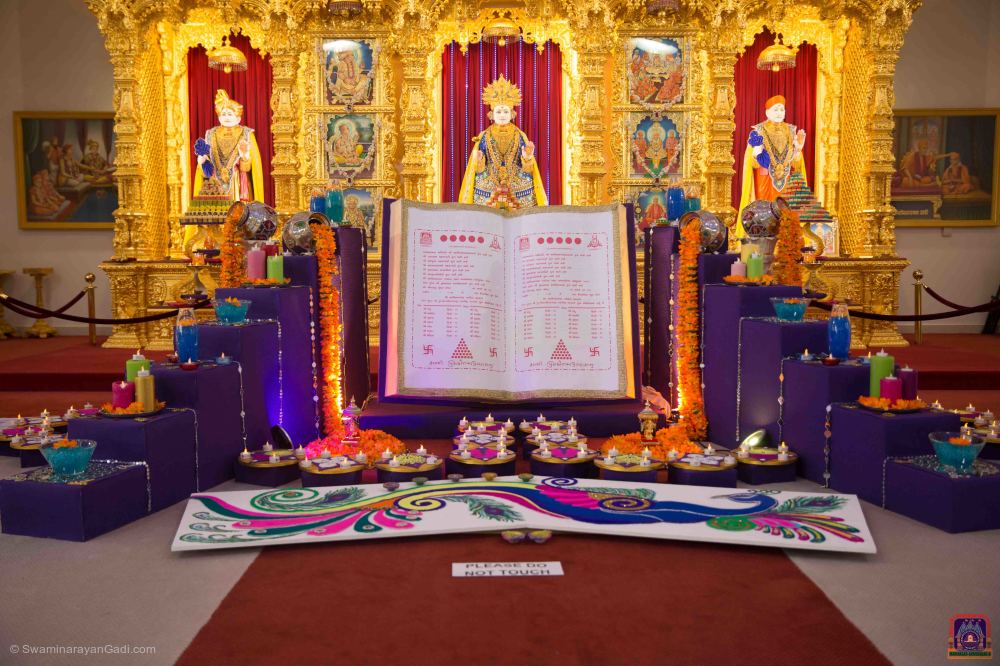 Mandir is closed for Private Prayers

This day is the final day of the Hindu year and Kali Chaudas. Kali is the deity of strength. Hence this day focuses on acquiring the divine strength to abolish idleness and immorality. Historically people offered poojan to Hanuman. It is said that this removes all fear of evil spirits and establish auspiciousness within us. By eradicating evil, we become internally enlightened. This internal evil refers to the evil spirits that reside within us, lust, anger, greed, avarice, etc. Once these have been banished from within us, we can offer true devotion unto the Lord. 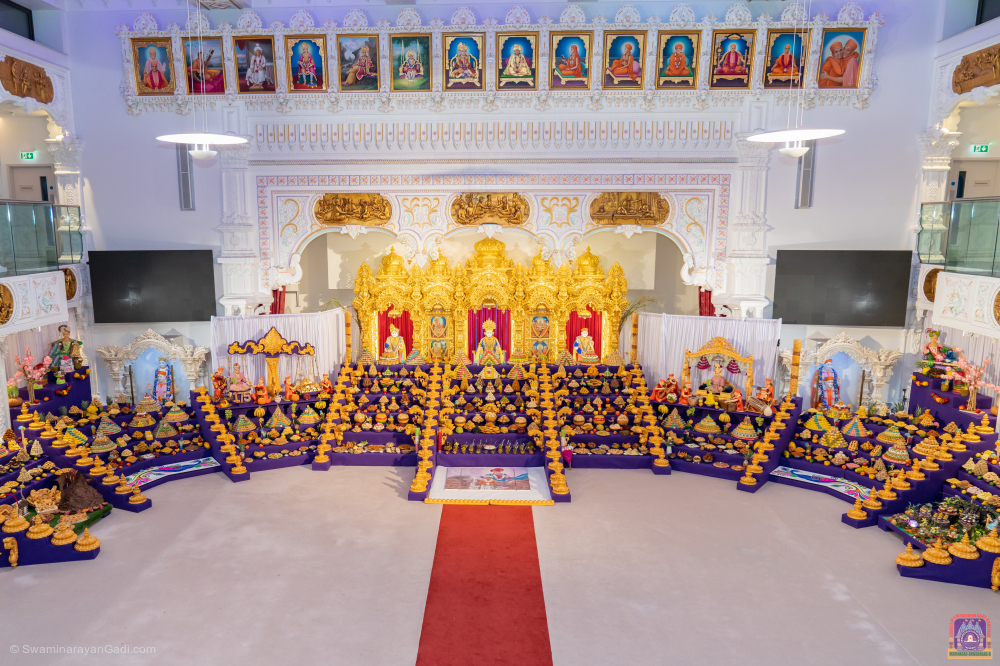 Aso vad (15) amass. Traditionally the New Year's accounts are sanctified on this day. Fireworks are exploded; a symbol of the burning of evil, and the resurrection of good light, the truth and divinity of the Lord. Divas are lit in homes and temples. Rangoli, elaborate patterns are artistically created using powdered paint at the entrance of homes as a welcoming symbol. The sky during this night would be moonless, therefore the lighting of the divas eradicate this darkness; yet another symbol of good over evil. The sentiment for a disciple of the Lord when lighting a divo is to pray for forgiveness of past misdeeds and for spiritual strength and wisdom for the coming year so that he can please the Lord more and more. 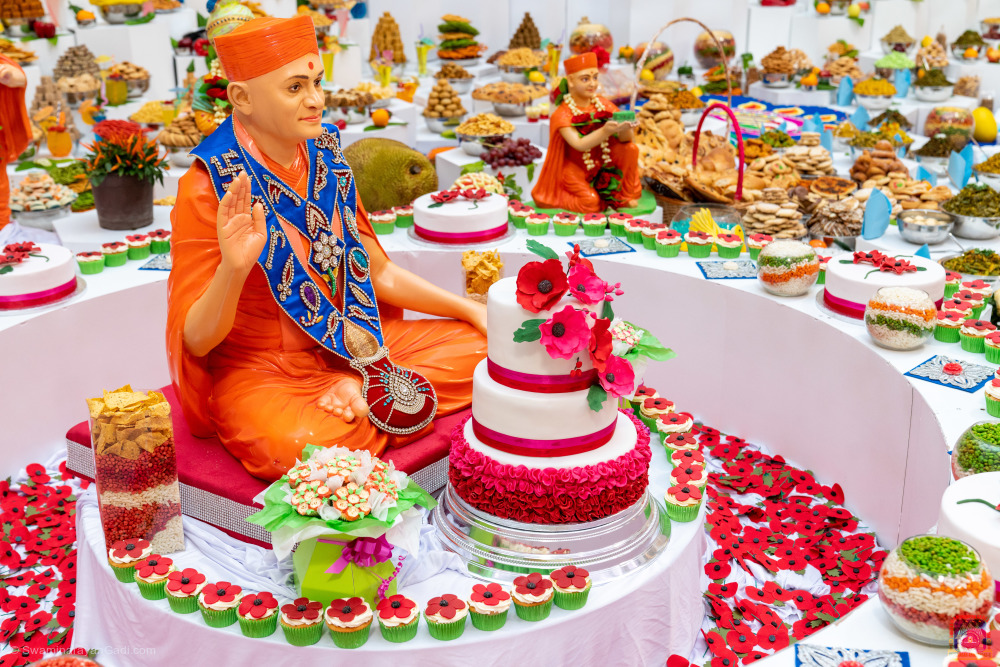 The new crop that had been planted after the monsoon season would have grown during the final month of the year, Aso, and would now be ready. This crop is harvested and first offered to the Lord on the first day of the year. This is the origin of annakutotsav, the offering of a vast array of elaborate dishes to the Lord. Ann literally means food (grain) and kut translates as mountain. Hence a vast mountain of different foods is placed before the Lord.

This auspicious day is filled with happiness and joy. It is said that he who remains joyous on this first day will also remain so for the rest of the year. But he, who wastes it by being miserable, will encounter the same sentiments for the forthcoming 12 months. For a disciple of the Lord, the sentiments are slightly different. They would spend the day visiting the Mandir, take part in the singing of kirtans, and performing devotional practices to the Lord. That way, the rest of the year would also be filled with the same divinity.

The final day of the Diwali festival, Bhai beej falls on the second day of the year. Traditionally, a sister would serve her brother with food on this day. Disciples of the Lord come together in the Temple and partake in the prasad of the Lord, as all of the Lord's children are brothers and sisters. 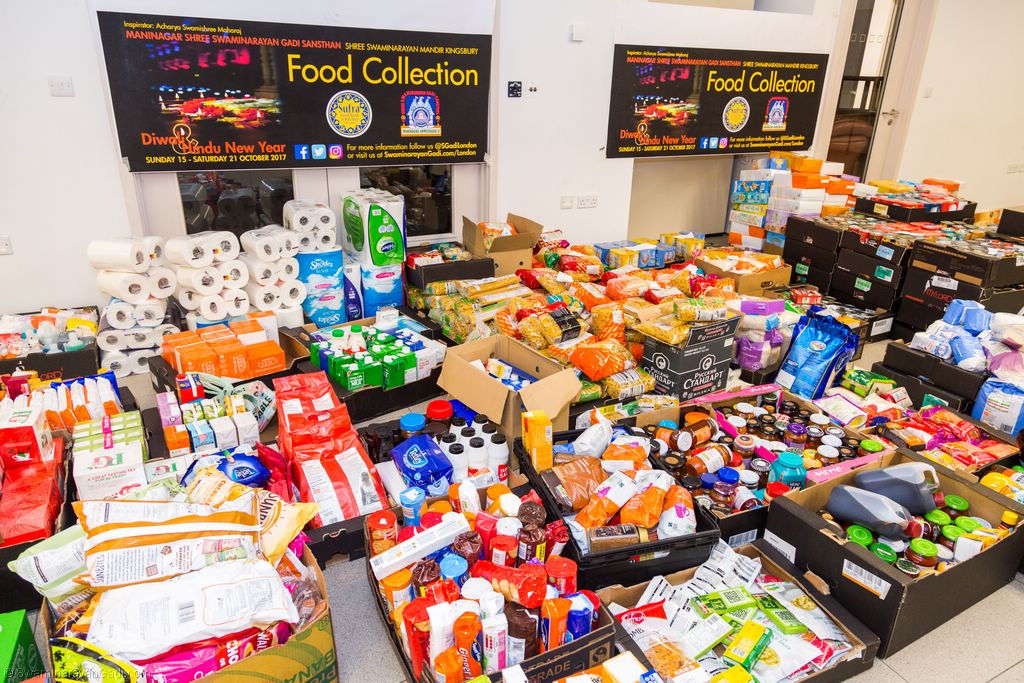 In support of local charities at the Mandir, throughout the festive period. 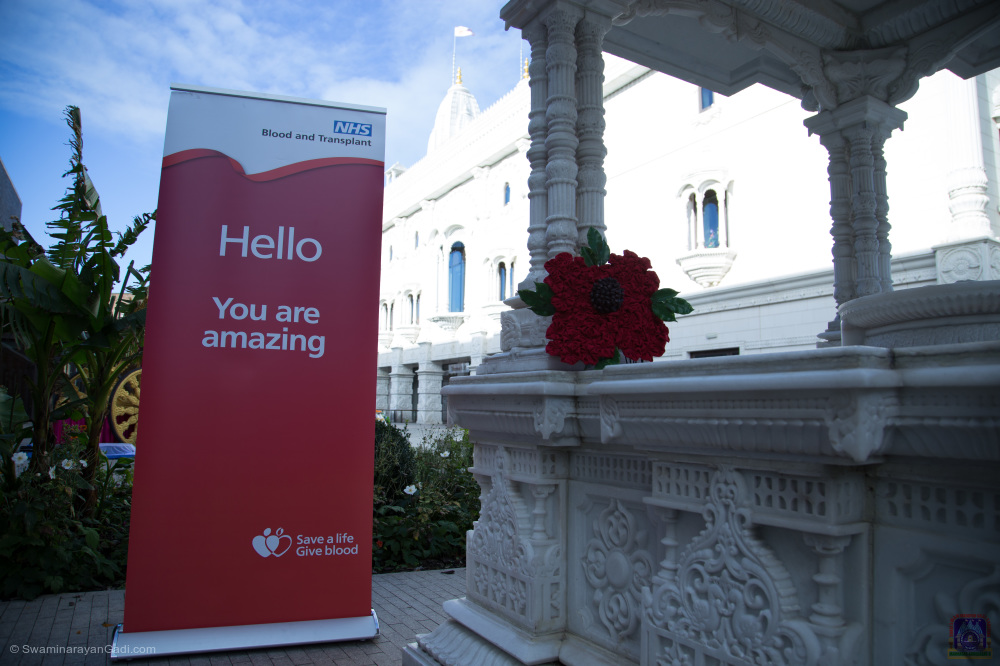