The most favoured philosophy of Lord Swaminarayan was of tyaag (to abstain from worldly associations). When only eleven years of age, Nilkanthvarni (Lord Swaminarayan's teenage name) renounced the material world, His family relations and home and embarked on a forest expedition to show the importance of tyaag. Despite His love of a life of tyaag, Lord Swaminarayan relinquished this for the benefit of His disciples. 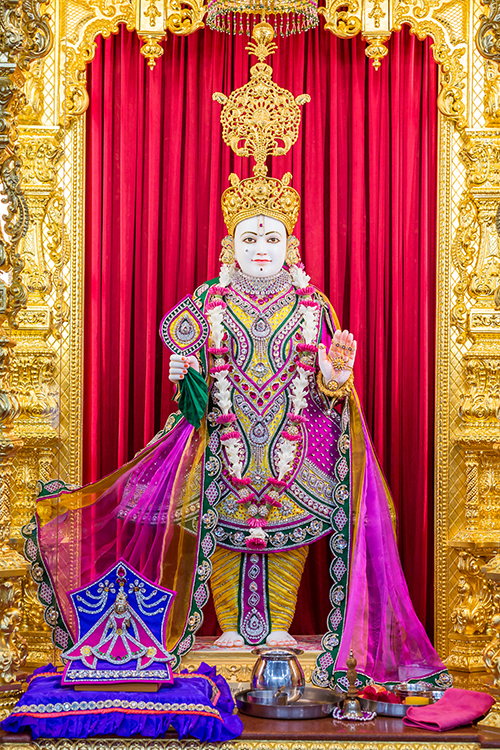 Lord Swaminarayan explained to the needy mortals that for any worthwhile deed to succeed, whether it be worldly or spiritual, bhakti (devotion) is essential. He also dispelled numerous false beliefs and superstitions (e.g. the killing of newborn female babies by drowning in milk, the burning of a widow on her deceased husband's funeral pyre) from society, which otherwise hindered the path to aatyantik moksh (ultimate salvation). Using education as a basis for improving one's life, Lord Swaminarayan encouraged His devotees (both male and female) to be hardworking, compassionate and free of all vices.

Devotees emigrate to the United Kingdom in the early 1960's

In order to further spread the teachings and principles of Lord Swaminarayan and Jeevanpran Abji Bapashree and to establish a community of disciples, His Divine Holiness Shree Muktajeevan Swamibapa gave His blessing for His devotees to emigrate to the United Kingdom in the early 1960's. A small number of families arrived from East Africa and India to settle in North London. Using their own houses as short-term mandir (temples), weekly sabha (recitals from the religious scriptures) were held to maintain and further encourage the traditions and devotional practices learnt from HDH Shree Muktajeevan Swamibapa. All the significant religious dates of the Santha (Diwali, Hari Jayanti, Gurupurima) were celebrated in full splendour. As the number of devotees increased the mandir moved from addresses in Chalk Farm and Kentish Town to Hendon.

The community further expanded, and many had not had HDH Shree Muktajeevan Swamibapa's divine darshan (divine visualisation of the Lord) for a long time. The elders in London prayed to their dearly missed Guruji HDH Shree Muktajeevan Swamibapa to visit and let them have the opportunity to demonstrate their devotion unto Lord Swaminarayan, Jeevanpran Abji Bapashree and their beloved Guruji. 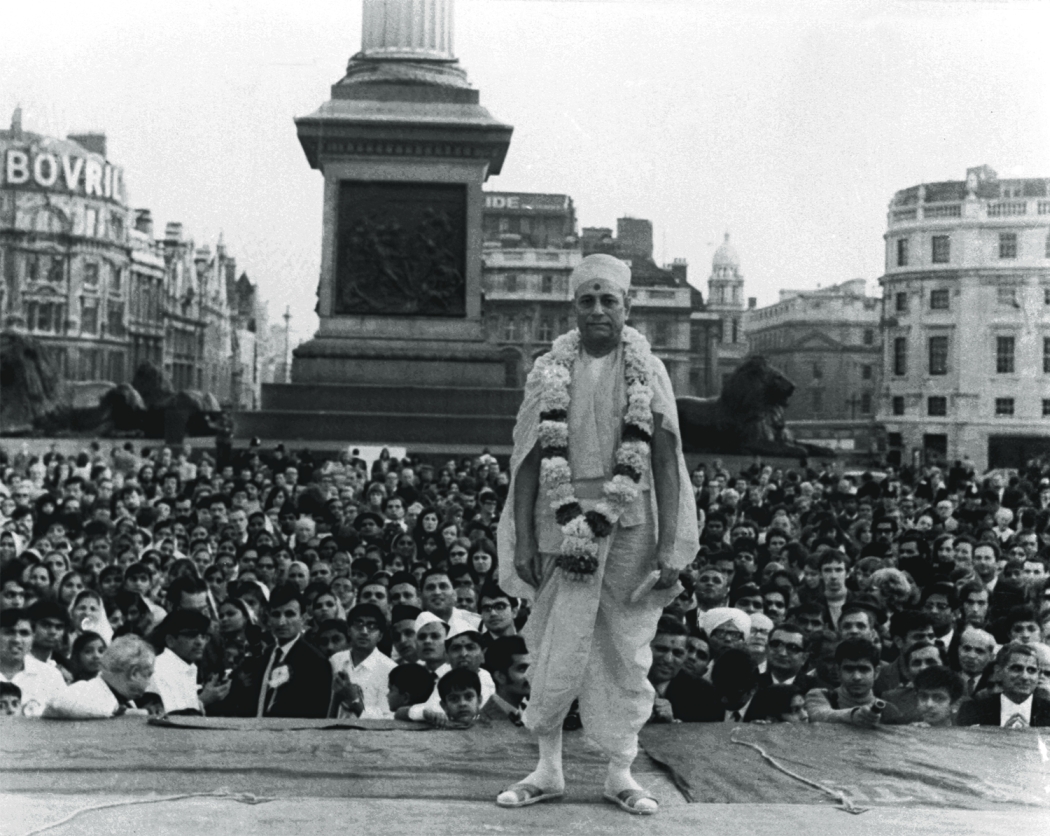 It was during this visit that HDH Shree Muktajeevan Swamibapa held a nagaryatra (procession) through the streets of central London, a first by a Hindu leader. Commencing at Marble Arch this Shanti Yatra, (procession for peace) as it was named, made its way along Park Lane, Hay Market, through Piccadilly Circus and culminating in Trafalgar Square. On a specially built stage within the square, a sabha was held where HDH Shree Muktajeevan Swamibapa gave His arshiwad (sermon) in English and the sant performed raas (traditional Indian dances).

The Shree Swaminarayan Sidhant Sajivan Mandal (SSSSM), London was established in 1964 with the inspiration and guidance of HDH Shree Muktajeevan Swamibapa. The meaning of the name itself, the organisation (mandal) to maintain and further promote (Sajivan) the true principles (Sidhant) of Lord Swaminarayan, gave the devotees of London the energy and motivation to find a larger and more purpose built accommodation for the mandir. In 1971 the disciples purchased a community hall in Somerset Road, Hendon under the umbrella of the SSSSM. With HDH Shree Muktajeevan Swamibapa visiting the UK on a further two occasions, 1974 and 1979, the number of new devotees increased vastly and the mandir accommodation again was proving inadequate. With the blessings of Shree Swaminarayan Gadi's Adya Acharyapravar (founding preceptor) Muktjeevan Swamibapa and his successor Acharya Swamishree Purushottampriyadasji Maharaj, the devotees in London purchased a disused church in the affluent area of Golders Green and converted the internal characteristics into a majestic mandir. 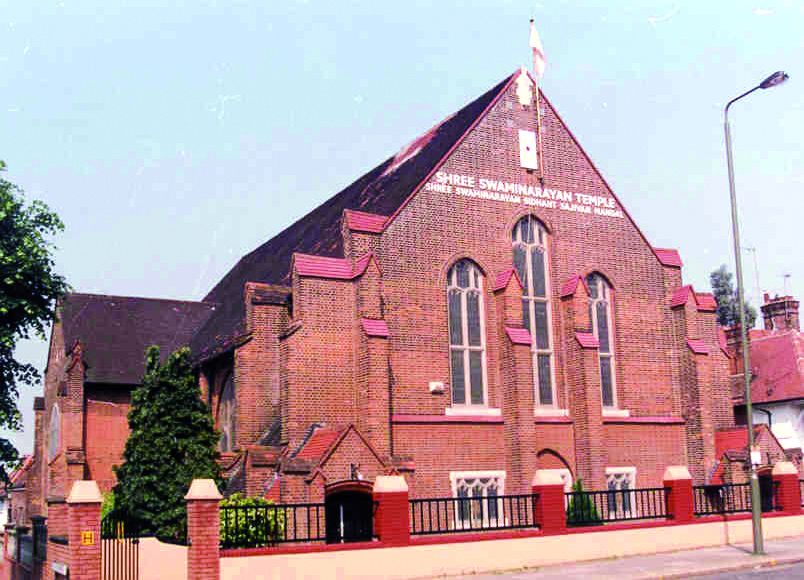 The main purpose of Acharya Swamishree's visit to the UK in 1982 was to open the Shree Swaminarayan Temple on Finchley Road, Golders Green. The central elements of this Mahotsav (festival) were parayan (recitals of the scriptures), a nagarjatra, (from Somerset Road to Finchley Road) and the inaugural ceremony of the mandir.

To fulfil the prayers of and sustain the endless devotion of the devotees in the UK, His Divine Holiness Acharya Swamishree regularly visits the UK, where he leads by example on how to attain the true pleasure of Lord Swaminarayan, Jeevanpran Abji Bapashree and HDH Shree Muktajeevan Swamibapa. He has made further tours approximately every two year since. 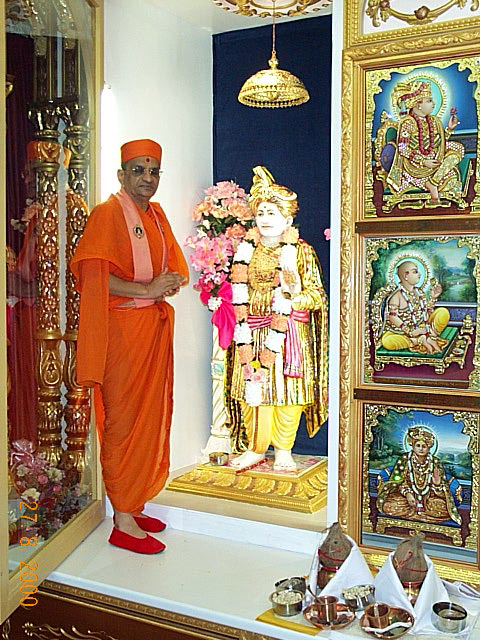 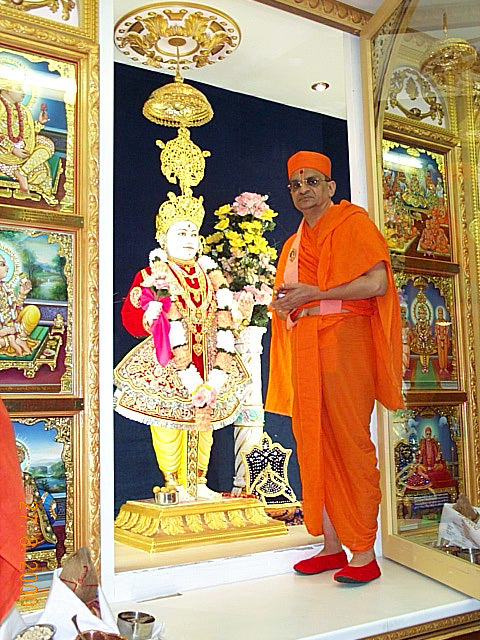 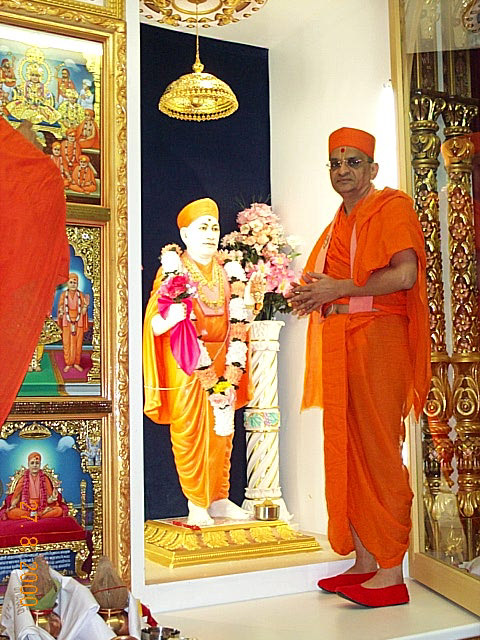 In the year 2000 the Murti Pratishtha Mahotsav - installation of the divine idols of the Lord - was celebrated at Shree Swaminarayan Temple London. 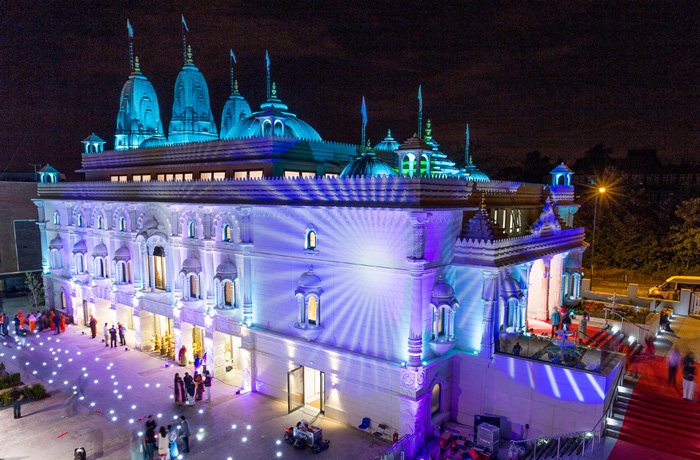 While principally a place of worship, the Mandir and surrounding facilities that make up Shree Muktajeevan Swamibapa Complex play host to a range of cultural, artistic, sporting, educational and charitable activities, all inspired by His Divine Holiness Acharya Swamishree Purushottampriyadasji Maharaj, the current sovereign of Shree Swaminarayan Gadi.

The Mandir was inaugurated during a magnificent festival in August 2014 in the divine presence of Acharya Swamishree Maharaj.