On the 17 th of October 1970, a magnificent procession was held in London as part of Jeevanpran Swamibapa's International tour of Spirituality and Morality.

This procession for peace and unity commenced at Marble Arch where thousands of people had gathered for the divine darshan of Lord SwaminarayanBapa Swamibapa. The parade continued through the streets of central London where thousands of delighted onlookers stopped and gazed in awe as the magnificent chariots passed. Shree Muktajeevan Swamibapa gave His divine darshan throughout the Shanti Yatra seated upon the ornately decorated chariot, with Shree Purushottampriyadasji Swamishree and Sadguru Shree Bhaktavatsaldasji Swami seated at His divine lotus feet. 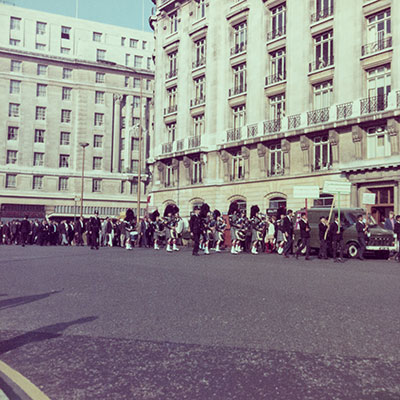 Scottish bagpipe performs at the procession.

During this procession, a Scottish bagpipe band had been invited to perform. This inspired the establishment of Shree Muktajeevan Pipe Band, which consists entirely of devotees of Shree Swaminarayan Gadi.

The Shanti Yatra culminated in one of London's most famous landmarks – Trafalgar Square.

Jeevanpran Swamibapa dismounted His chariot onto a specially built stage at the foot of Nelson's Column. This was a truly remarkable event as no religious leader had held such a parade and congregation in central London before. Again, another unique and unequalled episode in the history of Shree Swaminarayan Gadi. 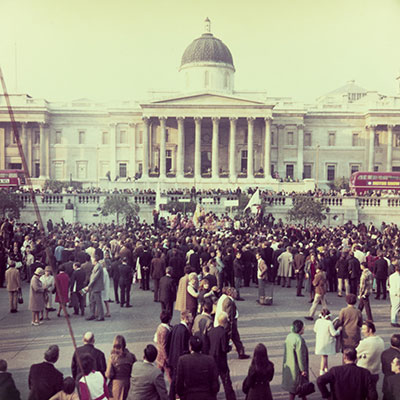